Did Myanmar Use Dominion or Smartmatic Election Software? 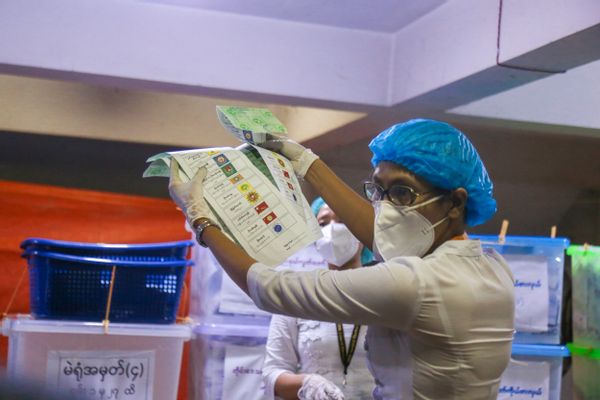 On Feb. 1, 2021, a military coup staged in Myanmar brought back baseless conspiracy theories about election technology that spread before, during, and after the 2020 U.S. presidential election. Dominion Voting Systems and Smartmatic have since taken the issue to court, citing defamation.

We previously debunked a number of conspiracy theories about Dominion Voting Systems and Smartmatic. Dominion provides a wide variety of election services, including hardware and software. Smartmatic creates and offers "electronic voting technology and services designed to make elections more auditable and transparent." Despite a false rumor, no, Smartmatic does not own Dominion. It claimed: "The White House is freaking out after Myanmar military arrests political leaders for election fraud in their November 8 elections. Myanmar used Dominion Voting Systems."

The QAnon supporter appeared to deduce sort of malice from the dated pictures. However, they were captured during Obama's presidency in 2011 and 2012. At the time, he promised support for Myanmar from the United States.

Another QAnon supporter going by the handle @MajorPatriot posted another baseless conspiracy theory. "Look what I just found," read the post. It pointed to a 2017 tweet by Smartmatic and appeared to indicate that the company was involved in Myanmar's elections. Both claims were false. Myanmar did not use Dominion Voting Systems, Smartmatic, or any other machines or electronics in its election process.

In 2020, Myanmar used paper ballots that were counted by hand. No electronics appeared to have been involved. Black and blue ink were accepted. Among the many interesting "non-sensitive" materials required in the election were rope, candles, and lighters. Plastic baskets were also used for counting votes. A special fact sheet for Myanmar's 2020 general election made no mention of Dominion or Smartmatic. The detailed document, provided by STEP Democracy, described the entire 2020 electoral process. This section was about vote counting:

Photographs of ballot hand-counting showed the baskets, envelopes, and other materials that were pictured in the fact sheet: Mandalay, Myanmar. Nov. 8, 2020. Election officers wearing facemasks are seen counting ballot papers during the vote-counting process at the military polling station. Polling stations across Myanmar are in the process of counting the votes after the deadline for voters to cast their vote comes to an end on the Myanmar 2020 General Election day. (Photo by Kaung Zaw Hein/SOPA Images/LightRocket via Getty Images)

The Associated Press reported that the military in Myanmar "charged that there was massive fraud in the election — particularly with regard to voter lists — though it has not offered any proof." No credible evidence of purported massive voter fraud was presented regarding the 2020 U.S. presidential election either.

An Instagram video featured both false claims about Dominion Voting Systems and Smartmatic. It was posted on Feb. 2, 2021. It appeared to indicate that former U.S. President Donald Trump would return to the White House after a supposed upcoming military coup. The video featured the words "the calm before the storm," "are you ready," and other overly dramatic phrases.

Following his presidency, Trump moved to his Mar-a-Lago property in Palm Beach, Florida. At the time of the military coup in Myanmar, he was preparing for his second impeachment trial. He was charged with "incitement of insurrection."

We reached out to both Dominion and Smartmatic for comment about the possibility of any past dealings with Myanmar. A spokesperson for Dominion told us that the company has never had any voting systems in Myanmar. Smartmatic also responded: "Smartmatic had no involvement in Myanmar’s 2020 elections. In fact, Smartmatic has never provided any election technology or services to authorities in that country. Any claim to the contrary is simply false."

In sum, Myanmar did not use Dominion Voting Systems or Smartmatic for its 2020 general election. Votes were cast and counted by hand.

Feb. 2, 2021: We updated this story to add a statement from Smartmatic.