A misleading and fear-mongering video purportedly showing 'radical' Muslims rallying around an image of Jesus' decapitated head was shared on Facebook by preacher Michael Chitwood. 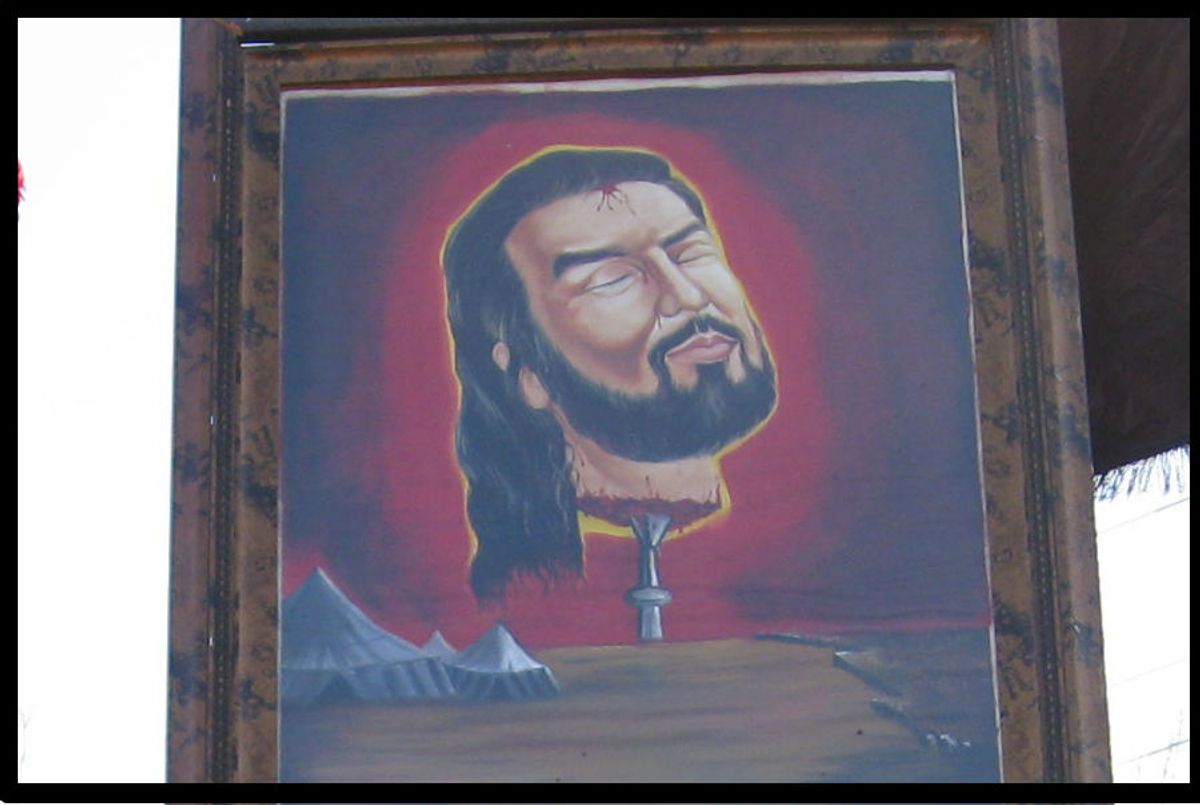 Claim:
A video shows a group of 'radical' Muslims rallying around a painting of Jesus' decapitated head in Dearborn, Michigan.
Rating:

The video was taken in Dearborn, Michigan, and shows the culmination of a procession for Arbaeen (a sacred Shia Muslim ritual).

The video does not show "radical" Muslims nor a depiction of a decpitated Jesus.

On 24 June 2016, preacher Michael Chitwood shared a video on his Facebook page along with a misleading and fear-mongering description of what the footage depicted (i.e., a "mass gathering of radical Muslims" with a "giant picture of Jesus Christ beheaded"):

>WAKE UP AMERICA!!! A MASS GATHERING OF RADICAL ISLAMIST IN DEARBORN, MICHIGAN. They chant and praise Allah and post a giant picture of Jesus Christ beheaded!! Do YOU Believe We are living in the last days?

Despite Chitwood's claims, this video does not depict "radical Islamists," nor does the painting featured in the video represent a decpitated Jesus Christ. This video captures Shia Muslims at the end of a religious procession, and the painting depicts Imam Hussain, the grandson of the prophet Muhammad, who was killed at the Battle of Karbala.

The video is also several years old. Niraj Warikoo, a writer for the Detroit Free Presscovered the event when it took place in 2009:

Thousands of Shi’ite Muslims trudged through snow-covered sidewalks in Dearborn in a procession to remember the death of a Muslim leader killed in 7th century Iraq.

The 2-mile procession featured colorful flags in honor of Imam Hussain, the grandson of Islam’s prophet, religious songs, and cries of “We support you, Oh Hussain.”

The worshippers started at the Karbalaa Islamic Education Center on Warren Ave., the main commercial strip of Dearborn, and then walked to nearby Hemlock Park. There, they recited poetry and tapped their chests in mourning rituals known as latmiya.

This footage has nothing to do with "radical Islamists" celebrating the decapitation of Jesus Christ; it captures a group of Shi'ite Muslims mourning the death of Imam Hussain at the culmination of a procession for Arbaeen: In metro Detroit, the Arbaeen parades started in 2004 and have grown in size each year, attracting Shi’ite Muslims from across the Midwest and parts of Canada. The crowd was mostly Iraqi-American, with some draping Iraqi flags on their back. Imam Hussain was killed in the city of Karbalaa, Iraq.

“We don’t want to forget the message that Imam Hussain delivered 1400 years ago,” said Basel Taki, 46, of Akron, Ohio. “This message is for all human beings. We will never forget to be right, be fair, to do the right thing.”

Taki came to Dearborn for the parade with his wife, parents, and baby son, who was pushed in a stroller.

When the crowd reached Hemlock Park, they gathered before large paintings of Imam Hussain. Other posters depicted Shi’ite shrines in Iraq that have been attacked by radical Sunni Muslims in recent years. The marchers talked about how last week, a suicide bomber killed a number Shi’ite pilgrims in Iraq who were gathering for Arbaeen in Iraq.

Although Dearborn, Michigan, does have a large population of Muslims, the city did not implement Shariah Law, host a "pro-Isis rally," open a "ISIS Sympathetic Youth Center," or post a sign promising to kill all Americans on a Mosque.