Photographs show sign-bearing Muslim protesters at a demonstration in London, but not a 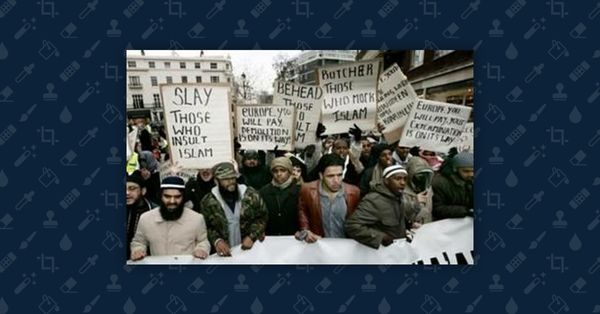 A series of photographs of sign-bearing Muslim protesters were taken during a 3 February 2006 protest staged in London by Muslims angry over the publication in Scandinavian periodicals of cartoons depicting the prophet Muhammad (not as a demonstation of Islam as a "religion of peace"):

The trigger for the latest clash of cultures was the publication by the Danish newspaper Jyllends-Posten on September 30 [2005] of 12 cartoons of Muhammad. A biographer of the prophet had complained that no one would dare to illustrate his book, and the newspaper challenged cartoonists to draw pictures of the prophet in a self-declared battle for freedom of speech.One submission showed Muhammad wearing a bomb-shaped turban; in another he tells dead suicide bombers that he has run out of virgins with which to reward them. Any portrayal of Muhammad is blasphemous in Islam, lest it encourages idolatry.

In October [2005] ambassadors from ten Muslim countries complained to Anders Fogh Rasmussen, the Danish Prime Minister, who refused to interfere with the press’s freedom.

But the issue began to boil [in January 2006] after the cartoons appeared in Magazinet, a Christian newspaper in Norway, and on the website of the Norwegian newspaper Dagbladet.

An estimated 500 to 700 demonstrators marched from Regent's Park Mosque to the Danish embassy in Knightsbridge during the protest. MP David Davis, the shadow home secretary, condemned messages displayed on some of the protesters' placards as an "incitement to murder":

Clearly, some of these placards are incitement to violence, and indeed incitement to murder — an extremely serious offence which the police must deal with and deal with quickly.Whatever your view on these cartoons, we have a tradition of freedom of speech in this country which has to be protected. Certainly there can be no tolerance of incitement to murder.

MP David Winnick, a member of the House of Commons Home Affairs Committee, called for the prosecution and deportation of some of the demonstrators:

Mr Winnick said: "The cartoons were deeply offensive to hundreds of millions of Muslims. But it is totally unacceptable that, on British soil, there should be thugs demonstrating for people to be beheaded and actually glorifying the atrocities of July 7."It is to be hoped that prosecutions will follow very quickly indeed."

He said those responsible who were temporarily in Britain should be deported, even it meant stripping them of permission previously given to remain in the country.

The Walsall North MP added that the overwhelming majority of Muslims in Britain "have the same distaste as the rest of us about these thugs".

"I hope it will be the last time we ever see such a demonstration, totally unacceptable to the Muslim community," he said.

Other Muslims maintained the protesters were extremists not representative of mainstream British Muslims:

Asghar Bukhari, chairman of the Muslim Public Affairs Committee, said the demonstration in London should have been stopped by police because the group had been advocating violence.He said the protesters "did not represent British Muslims".

Mr Bukhari told the BBC News website: "The placards and chants were disgraceful and disgusting, Muslims do not feel that way.

"I condemn them without reservation, these people are less representative of Muslims than the BNP are of the British people."

He said that Muslims were angry over satirical cartoons of the Prophet Muhammad published in European papers but it was "outrageous" for anyone to advocate extreme action or violence.

"We believe it [the protest] should have been banned and the march stopped.

"It's irrelevant whether it's Muslims causing hatred or anyone else — freedom of speech has to be responsible."

No arrests were made at the time, according to police, due to the danger posed by the size and nature of the crowd:

As the clamour for action grew, police sources said there were no arrests because of fears of a riot. A senior Scotland Yard officer said: "We have to take the overall nature of the protesters into account. If they are overheated and emotional we don't go in."It's like a risk assessment; you have to look at the crowd you are dealing with. If we went in to arrest one person with a banner the crowd would turn on us and people would get hurt."

Although it has been circulated with the set of images displayed above, the following photograph likely comes from a completely different protest held in Luton a couple of years earlier: