Obama and Clinton Have Iranian Advisers?

Neither Barack Obama's nor Hillary Clinton's top adviser is Iranian: they're both American citizens by birth. 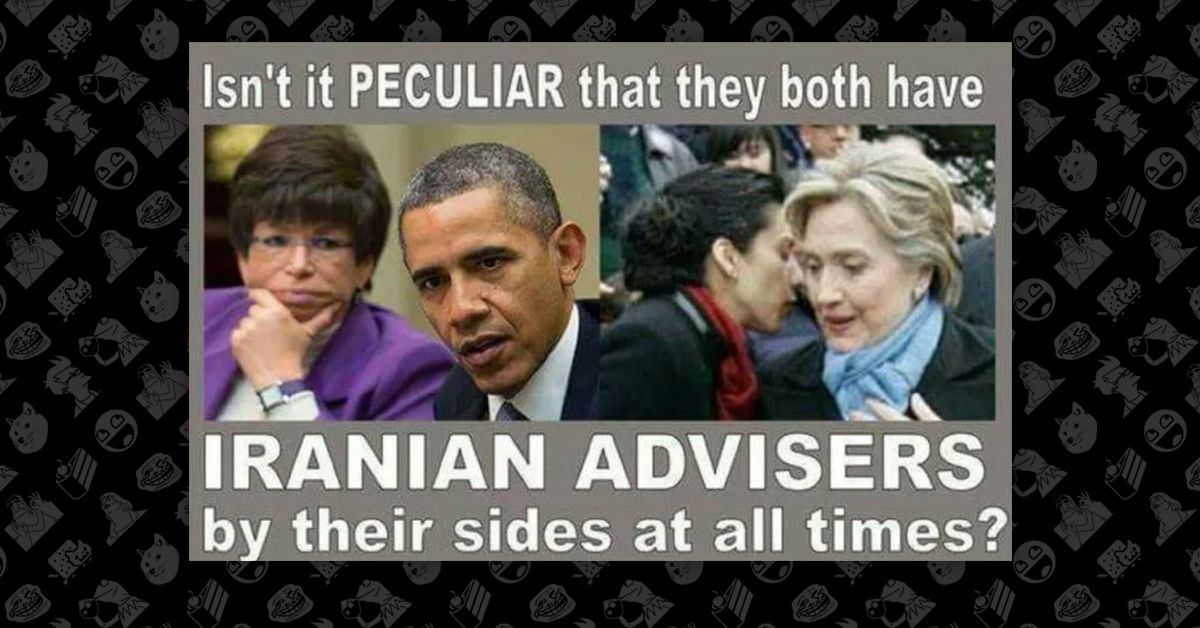 Claim:
Hillary Clinton and Barack Obama have "Iranian advisers by their sides at all times."
Rating: This image questioning the peculiarity of Hillary Clinton and Barack Obama having "Iranian advisers by their sides at all times" misses the mark badly in that neither of the persons it pictures — Valerie Jarrett and Huma Abedin — is Iranian. The former is the child of two American-born U.S. citizens, and the latter is the American-born daughter of immigrants from India and Pakistan.

Valerie Jarrett is one of Barack Obama's top advisers, but neither she nor her parents are Iranian, lives in Iran, or (as far as well can tell) are Muslims. Jarrett's parents, James E. Bowman and Barbara Taylor Bowman, were both American-born U.S. citizens; the couple merely lived in Iran for about six years in the late 1950s and early 1960s while James (a doctor) served as chair of pathology at Nemazee Hospital in Shiraz as part of a program that sent American physicians to developing countries. Valerie was born in Shiraz, but she returned to the U.S. at age 5 with her parents in 1962, and her parents spent the rest of their working lives residing in the Chicago area (as did Valerie until she joined the Obama administration in 2008). James Bowman passed away in Chicago in 2011, while Barbara Bowman still lives in the Windy City. We've found no evidence that Valerie Jarrett is a Muslim, her only apparent connection to that religion being that she lived in a predominantly Muslim country with American parents for the first few years of her life.

Huma Mahmood Abedin is a long-time aide to Hillary Clinton who served as Deputy Chief of Staff at the State Department while Clinton was Secretary of State from 2009-2013; she is also the wife of former Democratic Congressman Anthony Weiner of New York. Abedin is the American-born daughter of an Indian father and a Pakistani mother who was raised in Saudi Arabia and identifies as a practicing Muslim. Rumors that her late father, her mother, and her brother were all "connected" to Muslim Brotherhood were promulgated by former Republican Congresswoman Michele Bachmann of Minnesota, who in June 2012 sent a letter to the Deputy Inspector General at the Department of State asserting that "infomation has recently come to light that raises serious questions about Department of State policies and activities that appear to be a result of influence operations conducted by individuals and organizations associated with the Muslim Brotherhood." Bachmann cited as proof of these "influence operations" the example that "the Department's Deputy Chief of Staff, Huma Abedin, has three family members — her late father, her mother and her brother — connected to Muslim Brotherhood operatives and/or organizations. Her position affords her routine access to the Secretary and to policy-making."

Bachmann's fellow Republican John McCain took umbrage at her claims about Abedin and condemned them on the floor of the U.S. Senate as having "no logic, no basis and no merit":

Huma Abedin, a Muslim and the deputy chief of staff and aide to Clinton, has been accused by former presidential candidate Michele Bachmann and four other House Republicans of being connected to a conspiracy theory that the Muslim Brotherhood is trying to infiltrate the highest levels of the U.S. government.

A somber McCain rose in her defense — not just to support a friend but also to take on fringe voices in his own party. It was a familiar role for McCain, who built a reputation as a maverick with a willingness to criticize what he believes are radical views within his party.

"Rarely do I come to the floor of this institution to discuss particular individuals," McCain said at the beginning of his remarks. "But I understand how painful and injurious it is when a person's character, reputation and patriotism are attacked without concern for fact or fairness."

McCain called Abedin a friend and a devoted public servant, and denounced what he called "sinister" accusations. The charges "are nothing less than an unwarranted and unfounded attack on an honorable woman, a dedicated American and a loyal public servant," McCain said. "These attacks on Huma have no logic, no basis and no merit. And they need to stop now."

In an interview following his speech, McCain said he learned about Bachmann's inquiry and felt compelled to correct the record.

"It's not as if [Huma Abedin]'s somebody I ran into, we've actually traveled to different places with Secretary Clinton, so we're close personal friends," McCain said. He recalled traveling with Clinton and Abedin to Afghanistan, Iraq, Latvia — even the archipelago of Svalbard near the Arctic Circle.