Does Elon Musk Have an Undergraduate Degree in Physics?

The truthfulness of Musk's claim that he received a bachelor's degree in physics from the University of Pennsylvania has been challenged by critics. 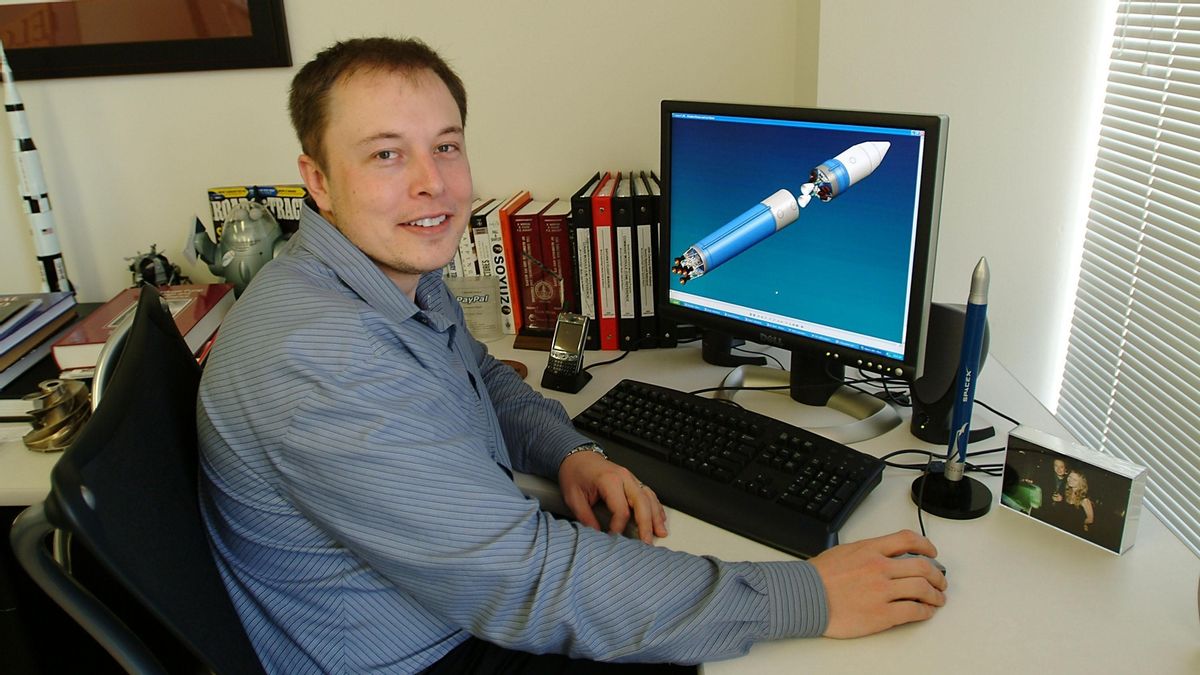 Claim:
Elon Musk has a bachelor's degree in physics from the University of Pennsylvania.
Rating:

Musk has on previous occasions claimed he received this degree in 1995, but the University of Pennsylvania says it was awarded in 1997.

A thread authored by the Twitter account "Capitol Hunters" went viral in December 2022 when it alleged that billionaire Elon Musk lied about his educational background, specifically regarding a bachelor of arts degree in physics from the University of Pennsylvania, as well as his claim of attending, briefly, a Ph.D. program at Stanford. This article explores the controversy around the physics degree.

In early biographies, Musk stated he received degrees in economics and physics from the University of Pennsylvania in 1995. In a 2002 SEC filing for the company PayPal, for example, Musk provided this information regarding his educational and professional background:

In a 2007 lawsuit alleging that Musk stole business secrets, internet advertising entrepreneur John O'Reilly sued Musk over allegedly false statements Musk made to secure a business meeting with him in 1995. In that filing, O'Reilly claimed:

The suit, which ended with a ruling in Musk's favor, entered into the public record copies of Musk's diplomas. These documents were then used in a 2009 lawsuit filed by Tesla founder Martin Eberhard, who accused Musk of "taking control of the company [Tesla], orchestrating his ouster in 2007 and attempting to 'rewrite history' to take credit for developing the pioneering electric Roadster the two men worked together to create."

The case was settled out of court, but Musk spoke about his academic background during a deposition compelled by this case. Musk, in that instance, equivocated about the timing of when he actually received these degrees.

Q. Okay. So you received a B.S. in Computational Physics from Penn?
Musk: Yeah.

Musk: Actually, I should be clear about that. So, I obtained the one Graduate degree in Business and Physics but [had] an agreement with the.. University of Pennsylvania. They said that I could have.. I could complete the English and History credit when I was no longer a student at Stanford. So they would delay transmitting the degree until I had done that."

This explanation also comes up in an early edition of a biography of Musk written by reporter Ashlee Vance. Vance was unable to confirm the specific academic timeline in Musk's early biographies. In an appendix, however, Vance explained his research on the topic and included Musk's explanation for the discrepancy in dates and degrees :

While playing detective, O'Reilly unearthed some information about Musk's past that's arguably more interesting than the allegations in the lawsuit. He found that the University of Pennsylvania granted Musk's degrees in 1997—two years later than what Musk has cited. I called Penn's registrar and verified these findings. Copies of Musk's records show that he received a dual degree in economics and physics in May 1997.

Musk … had an explanation for the weird timing on his degrees from Penn. "I had a History and an English credit that I agreed with Penn that I would do at Stanford," he said. "Then I put Stanford on deferment. Later, Penn's requirements changed so that you don't need the English and History credit. So then they awarded me the degree in '97 when it was clear I was not going to go to grad school, and their requirement was no longer there."

"I finished everything that was needed for a Wharton degree in '94. They'd actually mailed me a Wharton degree. I decided to spend another year and finished the physics degree, but then there was that History and English credit thing. I was only reminded about the History and English thing when I tried to get an H-1B visa and called the school to get a copy of my graduation certificate, and they said I hadn't graduated. Then they looked into the new requirements, and said it was fine."

The explanations for the delay in degree granting are not entirely consistent, the Capitol Hunters Twitter account noted, and that account has also called into question the existence of the "new requirements" regarding History and English that would have facilitated Musk's being granted a degree after the fact.

Another area of controversy concerns the appearance and nature of the physics degree, specifically. Certificates of both a Penn economics degree and an alleged physics degree are included in documents filed as part of the O'Reilly and Eberhard lawsuits. While the economics diploma filed as evidence specifically indicates the academic discipline, name, and other details involved in the degree, the physics diploma appears to be a largely blank diploma and indicates no specific concentration: 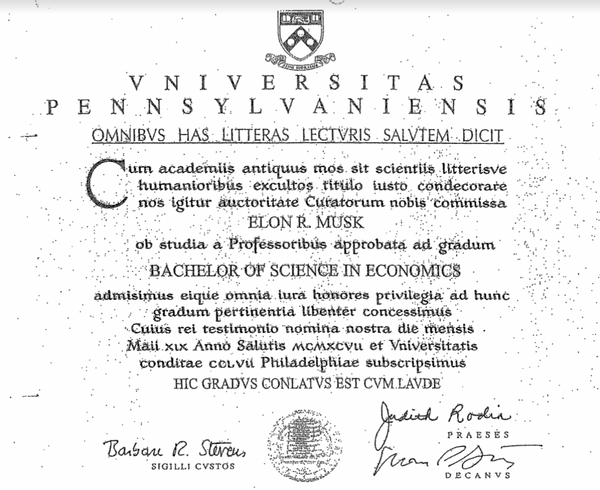 The University of Pennsylvania Department of Physics and Astronomy does describe Musk as an alumnus. In 2009 — the same year the dispute with Eberhard was litigated — Musk gave Penn's Center for Particle Cosmology a "generous endowment" allowing for an annual "Elon Musk Public Lecture":

The Elon Musk Public Lecture is made possible through a generous endowment gifted to the Center for Particle Cosmology in 2009 - its inaugural year. Mr. Musk is an alumnus of the Department of Physics and Astronomy at Penn, and a proud advocate for the preparation that a physics education provides in many different careers.

In 2019, Aaron Greenspan, owner of the legal website Plainsite, as well as a frequent critic of, and litigant against, Elon Musk, asked Penn for a statement on Musk's degrees. In response, the university's public affairs office stated that:

Elon Musk earned a B.A. in physics and a B.S. in economics (concentrations: finance and entrepreneurial management) from the University of Pennsylvania. The degrees were awarded on May 19, 1997.

The University of Pennsylvania considers Musk to be a graduate of both the economics department and the physics department. Musk's past statements about his educational background, however, have been, at best, imprecise. He has claimed on several occasions to have received a physics degree in 1995 — a claim that was never fully true but which may have aided Musk's early business career.