Here is the history of the tens of thousands of pigeons and falcons that were deployed during World War II. 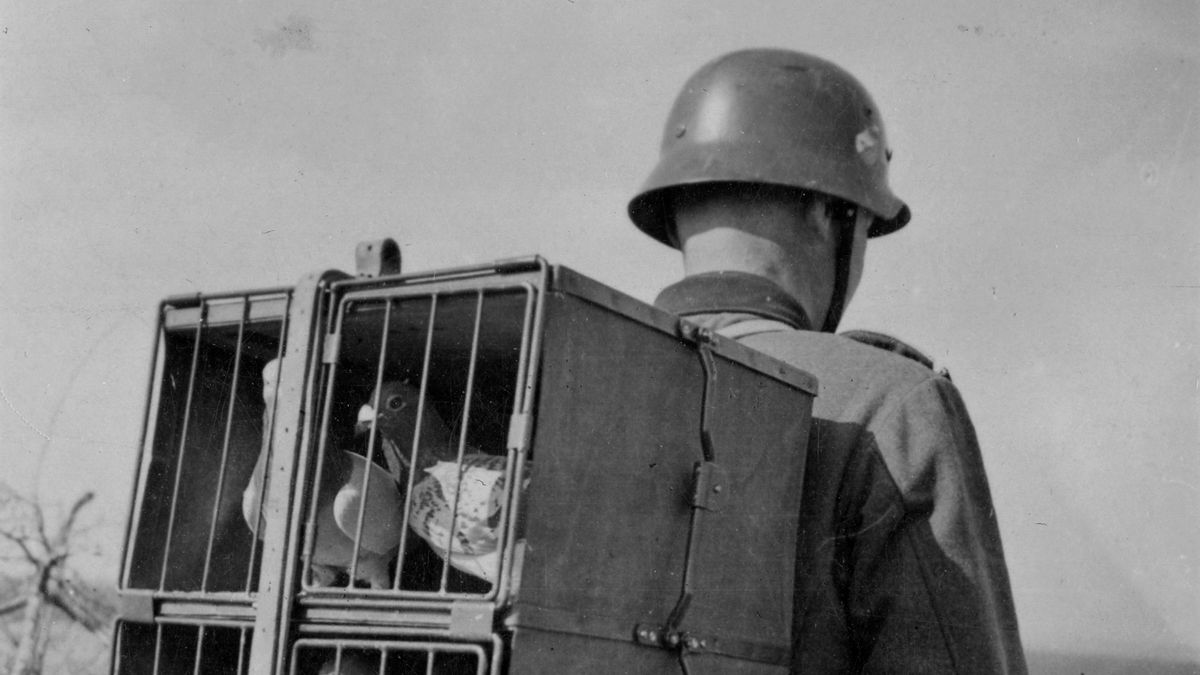 Claim:
A picture captured during World War II shows a soldier with the Wehrmacht in Nazi Germany carrying a cage of messenger pigeons on his back.
Rating:

On Nov. 7, 2022, Elon Musk tweeted a meme that showed a picture of a soldier wearing a cage of carrier pigeons on his back, kind of like a backpack. They're sometimes referred to as homing pigeons. Soon after, users identified the photograph as showing a soldier with the Wehrmacht in Nazi Germany during World War II.

The image posted by Musk said, "3 Unread Messages," a joke that acted as if the pigeons in the cages represented unread emails or Twitter notifications. Musk captioned the image as, "How times have changed." For any readers not keeping up with Musk's first few weeks as the new owner of Twitter, this referenced that he had indicated that he was inundated with messages. Days earlier, he had changed his Twitter bio to read, somewhat in jest, "Twitter Complaint Hotline Operator."

In this story, we've laid out a summarized history of the many thousands of pigeons and falcons that were said to have been an important part of the war effort.

Several users replied to Musk and pointed out that the photograph showed a soldier with the Wehrmacht in Nazi Germany.

One helpful Twitter user pointed to the Getty Images media licensing website, where an official caption could be found. It read as follows: "A German Wehrmacht soldier carries a cage of carrier pigeons used for relaying messages on the western front during the German invasion of France, known as the Battle of France, in World War II, circa May 1940."

Despite the joke meme that mentioned "3 Unread Messages," it's possible that the pigeons seen in the picture were on standby to be outgoing, not incoming, messengers. We found no further information about the specific pigeons in the photograph.

The History of Carrier Pigeons During WWII

On July 24, 1945, the Dayton Journal in Ohio published an article from The Associated Press that described the efforts made by pigeons and falcons during World War II. The article, which before now had never been transcribed for online reading, showed the headline, "Carrier Pigeons, Dive Bombing Hawks Played Big Role in Allied Victory."

The story described the fact that "between 50,000 and 75,000 birds were in military service" in the U.K. alone, and that "carrier pigeons and dive bombing hawks played a tremendous part in the allied victory over Germany."

According to the article, "many important German messages were taken off Nazi pigeons 'shot down' by a specially trained flock of falcons attached to the RAF (Royal Air Force), which also maintained a large pigeon 'air force' of its own throughout the war." We took specific note of two words in the article: "suspicious pigeons."

The falcon is a natural born killer-hawk with unusual intelligence – providing it can be trained to use its brains the right way. This the RAF did to counter the large and efficient carrier pigeon flock the Nazis had at the beginning of the war. The Germans not only dispatched them from land but also launched them on secret missions from airplanes and submarines. Falcon bases were located at strategic places along the south coast and reports from coastal watchers on the lookout for suspicious pigeons could be acted upon in a matter of minutes.

It was a simply matter for air ministry experts, who controlled all service pigeons in the country, to determine whether the suspects were friendly or enemy birds. Operations by friendly birds were controlled just like airplanes so they knew where every bird was all of the time. Falcons were taught to fly at great heights and to fly in circles like an aircraft on patrol duty. Each one stayed aloft about an hour before it was brought down with a special whistle call to be replaced by a fresh hunter. When the quarry was sighted the falcons would swoop down at a speed of 175 miles per hour and rake the enemy pigeon with its sharp talons. A falling trail of feathers meant another dead bird and well trained falcons would hover over the victim until someone came to retrieve the message it carried.

A veteran air force pigeon, named "White Vision" because of his color, was instrumental in saving 10 lives last October when a Catalina flying boat was forced down off the Shetland islands. A hastily scribbled message was attached to "White Vision's" leg and it flew 60 miles through a rainstorm to bring news of where the flying boat went down. The crew was rescued the next morning.

Another RAF pigeon flew 1,090 miles from Gibraltar in what is believed to be a world's record flight.

Perhaps even more remarkable, we stumbled upon another fascinating story about a pigeon that carried a message for six years. On Sept. 6, 1949, Reuters reported, "Nazi Carrier Pigeon Takes Long Way Home."

A breeder of carrier pigeons cleaning his dove cote at Forst, in the Soviet zone, was surprised to discover a newly arrived and visibly exhausted pigeon among his own breed.

The message removed from under the pigeon's wing was a desperate call for help from an isolated German infantry battalion in southern Italy which reported that it was "completely cut off by the enemy and near to starvation."

Where the pigeon spent the years between 1943, when the message was dispatched, and the date it arrived is a mystery.

Another interesting story about one of the pigeons from WWII was described in this video report from "CBS This Morning."

The Pigeons That Helped Win WWII. CBS This Morning, 2012, https://www.youtube.com/watch?v=6DAoFIwe50U.