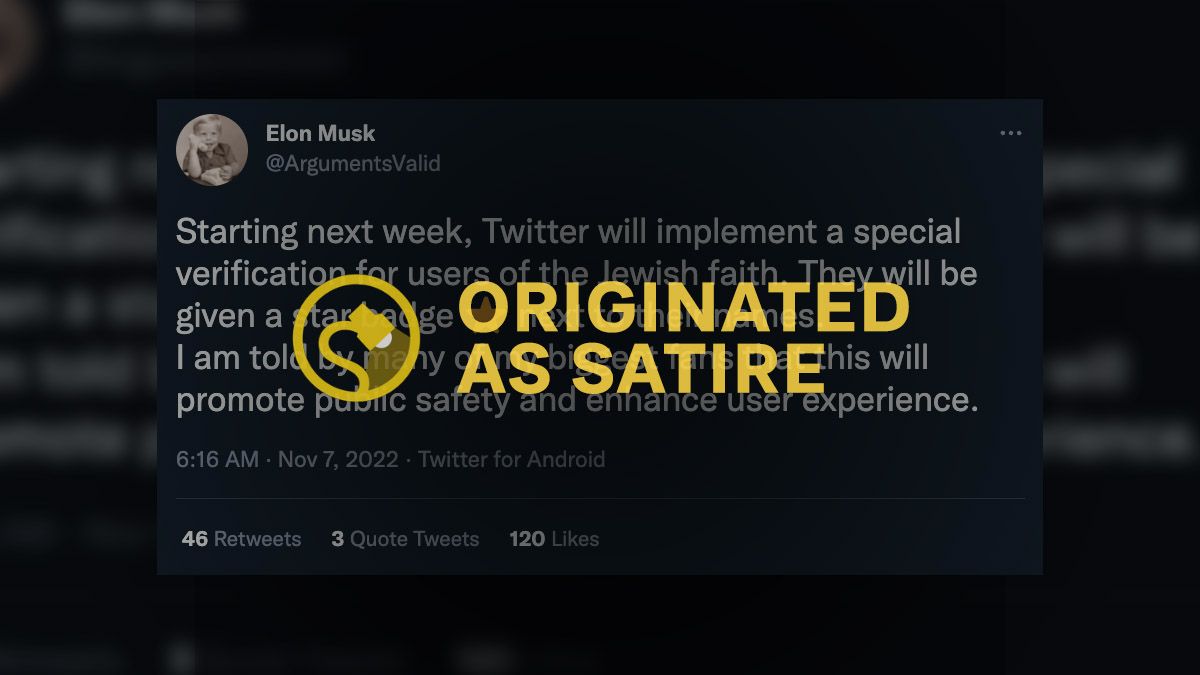 Claim:
Elon Musk tweeted that Twitter would be implementing yellow star badges to verify users of the Jewish faith.
Rating:

On Nov. 7, 2022, a screenshot of a tweet was posted on Reddit with the caption, "Oh no." The tweet appeared to come from Twitter owner Elon Musk and said that Twitter would be implementing yellow star badges as "a special verification for users of the Jewish faith." However, this tweet did not come from Musk.

The tweet featured in the screenshot originated on a Twitter account named @ArgumentsValid that used the display name "Elon Musk" with Musk's current profile picture. The account's bio said that it publishes parody.

The satirical tweet played on two separate subjects. First, there was the fact that Musk had announced plans for Twitter to implement a new paid subscription plan for users to receive a verification badge, among other purported perks. This plan brought with it a bit of controversy over the potential for impersonation. Second, the crux of the tweet alluded to the fact that Jews throughout Nazi-occupied Europe were forced to wear a badge in the form of a yellow star as a means of identification, as published by The British Library Board.

After only seven hours, the Reddit thread on the r/WhitePeopleTwitter subreddit showed over 51,000 points. This meant that it was one of the most popular posts on the entire website for the day. The thread displayed a small "Satire / Fake Tweet" label. However, that label wasn't added until over two hours after the thread was posted, according to a message from one of the subreddit's moderators. 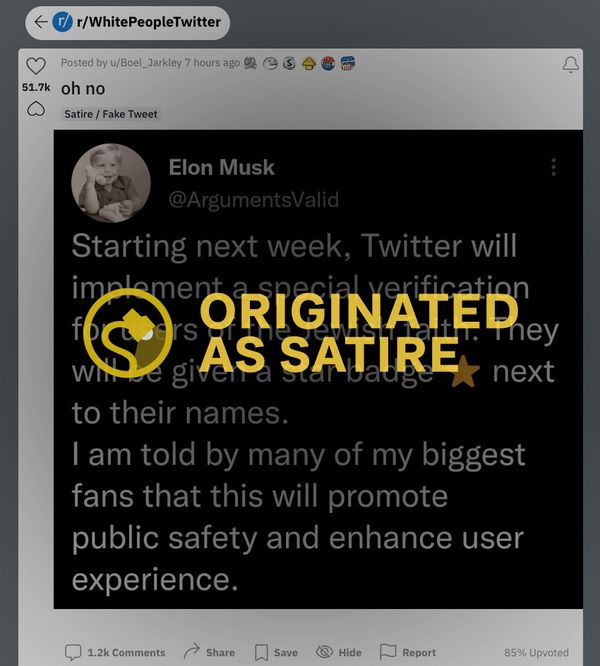 A search of Facebook found that the screenshot of the satirical tweet was being shared as if it was a real message that came from Musk. One user posted, "JUST LIKE THEY WORE THE STAR ON THEIR CLOTHES IN GERMANY! IT WAS USED NOT TO HELP TREAT THEM BETTER BUT TO TREAT THEM WORSE..... WHY DOESN'T ANYONE PAY ATTENTION TO HISTORY!!!!" Another user said, "Pretty sure this has been tried before," referring to yellow stars worn by Jews during World War II.

At the same time, some other Facebook users realized it was a joke. One user posted, "Trolling Elon is getting out of hand." A second person also shared the tweet screenshot and said, "Ok, Facebook, we will try satire once again."

"The Yellow Star." The British Library Board, https://www.bl.uk/learning/histcitizen/voices/info/yellowstar/theyellowstar.html.