Were Mules Killed to Film 'Patton'?

One scene depicts the colorful general shooting the animals to clear the roadway for his troops. 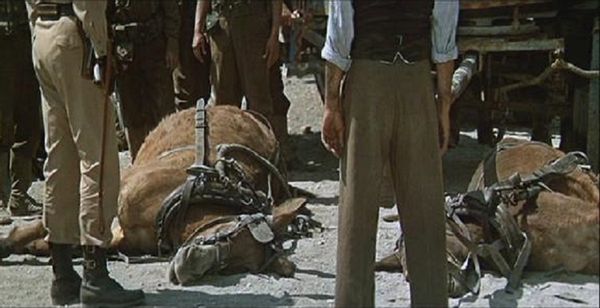 Claim:
Mules were shot during the filming of the bridge scene in the 1970 motion picture 'Patton.'
Rating:

[What was an] isolated [slapping] incident quickly became two. Bellicose Lieut. General George Smith Patton Jr. had degraded another enlisted man. Private Charles Herman Kuhl had written home to Indiana: "General Patton slapped my face yesterday and kicked me in the pants and cussed me." Kuhl, like the unnamed artilleryman whose slapping precipitated the [first] Patton case, had also been hospitalized for psychoneurosis.

There were other stories of unsoldierly conduct by West Pointer Patton. On one occasion he had pounced on a group of anti-aircraft men who had just beaten off an enemy attack, with casualties. Those who could stand were lined up and dressed down by Patton for not wearing their leggings. In Sicily, a Patton outburst was touched off by a mule cart which blocked a bridge. Patton ordered the cart tipped over, then ordered the mule shot.

These episodes were all memorably dramatized in 20th Century-Fox's Academy Award-winning 1970 film, Patton (although the two slapping incidents were conflated into a single case, and a cook rather than a group of anti-aircraft men received a dressing-down on screen for not wearing his leggings). Ironically, the general's encounter with a mule cart was the episode that became the most controversial scene of the film, as described in Robert Brent Toplin's Unchallenged Violence:

More relevant to the issue of violence is the tradition of not showing the killing of animals on television. Organizations like the Society for the Prevention of Cruelty to Animals do not look kindly on such portrayals. When the movie Patton made its debut on TV, audiences familiar with the motion picture saw a good example of media irony. The television version cut out a brief but rather detailed scene of Patton shooting a mule, then having the carcass tossed over a bridge. The cinematic slaughter of hundreds of people remained in the TV version, of course.

As this scene is depicted in the movie, Patton becomes enraged upon discovering that a column of American troops, tanks, and vehicles has been held up and exposed to enemy fire because two mules hitched to an Italian peddler's cart are blocking a narrow bridge. The bellicose general angrily turns on the soldiers who have been trying, ineffectively, to pull the stubborn animals off the bridge, shouting at them: "Jackasses? You let a whole column get stalled and strafed on account of a couple of jackasses? What the hell's the matter with you?"

The subsequent killing of the animals is presented through inference rather than graphically: the audience sees Patton pull out and aim a revolver, hears the sound of a gunshot, views quick cuts to the peddler's anguished reaction and a long shot of the bridge, hears another gunshot, then sees the two mules lying prone on ground (but with no visible wounds or bleeding). This is followed by Patton's barking at the soldiers to "Get 'em over the side and clear this bridge," and a long shot showing the animals being dumped over the side of the bridge and plunging into the water below. (Some reports maintain that the first television airings of Patton did not omit the bridge scene entirely, but simply cut out the final shot of the dead mules being tossed over the side.)

Animal welfare groups criticized Patton's producers when the film was released, because the movie portrayed the killing of animals on-screen and because of suspicions that animals had been mistreated — injured, possibly even killed — during the making of the film itself. This controversy lives on in the modern rumor that not only were mules killed during the production of Patton, but that they were actually shot during (or just before) the filming of the bridge scene.

The American Humane Association (AHA) found investigating the reality of Patton to be difficult because most of the film had been shot in Spain, a country that was far away from the prying eyes (and jurisdiction) of American and British animal welfare organizations, and one in which rough treatment of animals was more common. According to newspaper accounts of time, 20th Century-Fox officials pleaded ignorance or dissembled when questioned about the fates of animals used in the film:

Apparently in the two countries where bull fighting is a national mania [i.e., Spain and Mexico], rough handling of hoofed, beaked and scaled performers is no big deal. But bullfighting is blacklisted by the AHA.

The unacceptable pictures [listed in a recent AHA bulletin] were American-made, but filmed abroad.

Perhaps the loudest objection was voiced over the apparent shooting of two mules blocking a key bridge in "Patton." The scene depicts the colorful general shooting the animals to clear the way for his troops.

Observers on the scene disclaimed knowledge of whether the mules were in fact donkeys.

Is it less humane to kill mules than donkeys became a side issue.

Someone also declared it was virtually impossible to teach either mules or donkeys to lie down and play dead on voice command. The most effective way to have them act dead is to dispatch them with a bullet.

An unofficial spokesman for 20th Century-Fox said, "Look at it this way. Those were very old animals. They were sick and dispirited. They had come to the end of the trail."

The man's voice quavered with emotion. "If those mules — or donkeys — were shot, it was the humane thing to do. Believe me."

The animals look dead or tranquilized in the single close-up view of them included in the film, but it's difficult to make a definitive assessment from such a brief glimpse, with no additional context. As noted above, no blood or wounds are visible in the scene, but a carefully-dispatched animal could possibly be dressed and positioned in a way that obscured a fatal gunshot wound: However, Toplin noted in a later book, History by Hollywood, that:

In the film Patton points his gun at the animals and fires. Soldiers are then seen tossing the carcasses into a river. An extra in the film told reporters that the crew killed the animals with strychnine and had also clubbed a donkey to death and blown up a horse by tying dynamite to its belly.

With not much more to go by than some sketchy, decades-old newspaper accounts, our best guess would be that a couple of mules (or donkeys) were killed during the production of Patton, but off-camera and by poisoning rather than shooting.