Is This Muhammad Ali with All of His Winnings in 1964?

A photograph of Muhammad Ali standing near piles of cash in a bank vault is often shared with inaccurate or misleading information. 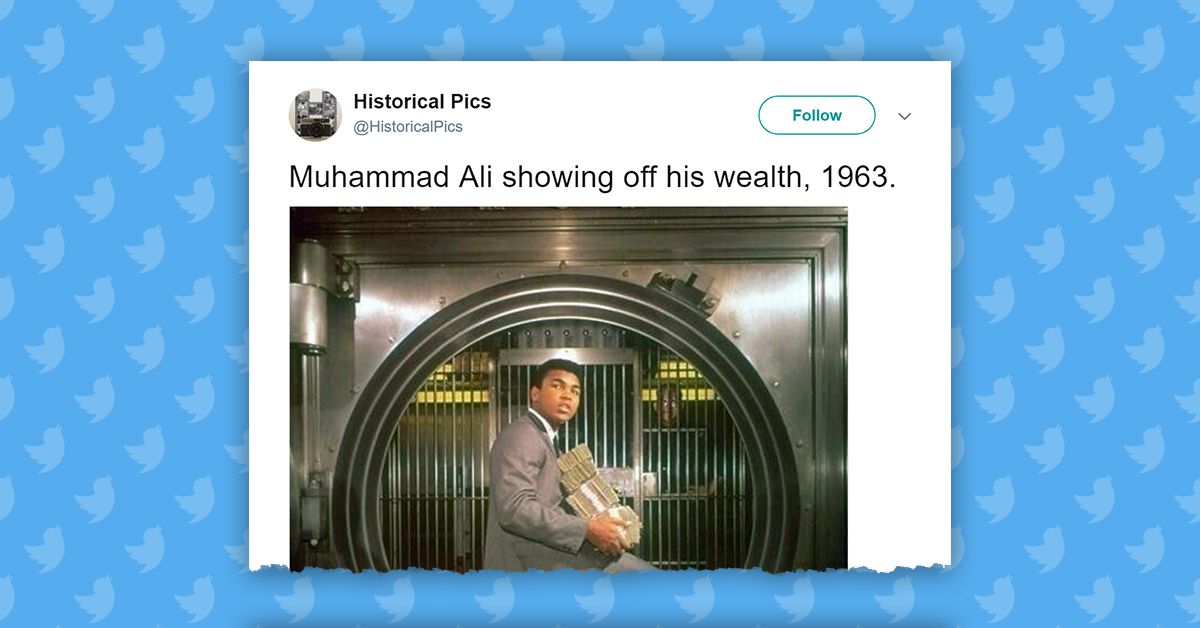 Claim:
A photograph shows Muhammad Ali with all of his winnings in 1964.
Rating:

In July 2017, a photograph of boxer Muhammad Ali surrounded by piles of cash in a bank vault, frequently shared with inaccurate information, resurfaced. On 8 July 2017, for instance, the "Historical Pics" Twitter account shared the image along with the caption "Muhammad Ali showing off his wealth, 1963": The photograph was originally taken for the cover of Sports Illustrated in February 1964. In the cover story, titled "My $1,000,000 Getaway," Ali, who was going by the name Cassius Clay at the time, wrote that he was looking at "$1 million in cold cash" in the photograph: If I were like a lot of guys—a lot of heavyweight boxers, I mean—I'll bet you a dozen doughnuts you wouldn't be reading this story right now. If you wonder what the difference between them and me is, I'll break the news: you never heard of them. I'm not saying they are not good boxers. Most of them—people like Doug Jones and Ernie Terrell—can fight almost as good as I can. I'm just saying you never heard of them. And the reason for that is because they cannot throw the jive. Cassius Clay is a boxer who can throw the jive better than anybody you will probably ever meet anywhere. And right there is why I will meet Sonny Liston for the heavyweight championship of the world next week in Miami Beach. And jive is the reason also why they took my picture looking at $1 million in cold cash [see cover]. That's how much money my fists and my mouth will have earned by the time my fight with Liston is over. Think about that. A southern colored boy has made $1 million just as he turns 22. I don't think it's bragging to say I'm something a little special.

Although the image was clearly staged, the money is likely real. However, we are doubtful that it actually belonged to the famous boxer, for two reasons: Clay wrote in the article accompanying the photograph that he "will have earned" $1 million, not that he already had earned it. Also, a man can be seen on the opposite side of the vault. This is most likely a bank manager keeping on eye on the cash.

The Guardian identified this person as a "security guard" when they published a different photograph of Ali in the bank vault: The version of this photograph which made the cover of Sports Illustrated was shot by Richard Meek. But I prefer this picture taken shortly beforehand by Ali’s friend Howard Bingham. It’s just a little more fun. And I like how the security guard is there in the background keeping tabs.

Although Cassius Clay did make a fortune early on in his boxing career and went on to earn $1 million and more and gain worldwide fame, and although the picture likely shows real cash inside of a bank vault, this photograph doesn't show the boxer's specific earnings at any time.