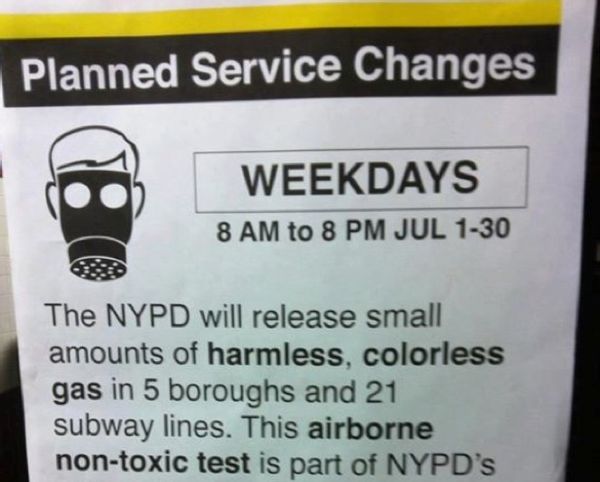 In late June 2015, a photograph of a poster purportedly issued by New York City's Metropolitan Transit Authority (MTA), alerting riders to "Planned Service Changes" involving a simulated gas attack, was circulated via social media. That poster, as seen below, bore the following message for MTA passengers beneath a transit-style icon depicting a man in a gas mask:

The NYPD will release small amounts of harmless, colorless gas in 5 boroughs and 21 subway lines. MTA customers are advised to stay calm. Although the dates of these planned "service changes" (July 1 to July 30) were included in the poster, any mention of year was not. A cursory web search reveals that these odd MTA warnings were reported upon news outletssuch as the New York Times back in 2013, when they originally appeared. A 14 May 2013 article titled "Test Gas Attack Is Coming to the Subway, This Time with Fair Notice" explained that the details of the test were mostly accurate,:

As it happens, the poster is for the most part true. At the request of the city police, the Brookhaven National Laboratory is leading what the lab says is the largest study ever of how air flows in a crowded city. Anyone who has ever stood on a station platform knows that a piston effect drives great columns of air ahead of a train moving through a tunnel, and also draws a gust behind it.

How quickly could airborne poison spread if the subways and trains were used to disperse it? That is what the study will try to find out with a tracer gas in the perfluorocarbon family, the Police Department announced. This has detonated suspicion on the Internet.

“Anytime the words ‘spread of gas in the subways’ are strung together, while in this instance harmless, a public explanation is required,” Paul J. Browne, the chief police spokesman, said.

However, the posters differed from standard MTA signage in a number of ways, including a lack of official logo and details about exactly how the service changes would affect riders: That's because even though the tests may have been real, the "gas mask" posters advertising them were not. As local culture site Animal New York reported, the scary posters were unauthorized ones created and placed by "pranksters":

Relax, they're not real. How do we know? Because MTA spokesman Adam Lisberg, who dismissed the postings as “the work of pranksters,” told us so.

Well before the story lit up social media in 2013 and again in 2015, the New York Police Department and Brookhaven National Laboratory issued a press release on 24 April 2013 to explain the purpose of the study, its scope, and its details:

The Subway-Surface Air Flow Exchange (S-SAFE), as the project is formally known, was commissioned by the NYPD and funded through a $3.4 million Department of Homeland Security Transit Security Grant. It is the first of its scale to study airflow in a dense, complex urban environment both below and above-ground. Researchers from Argonne National Laboratory and Los Alamos National Laboratory, along with additional meteorologists and engineers, will support Brookhaven's scientists as they track the movement of harmless tracer gases detected by air sampling devices placed in select locations on the street and in the subway system.

There will be approximately 200 sampling devices deployed during this study. During the study, researchers will disperse low concentrations of harmless gases known as perfluorocarbons at select subway and street-level locations over three, non-consecutive days in July. Weather conditions will determine which days are selected for the tests, and will be announced to the public a day in advance. The research will be conducted during daylight hours in parts of the Bronx, Brooklyn, Queens, Staten Island and in Manhattan from 59th Street to the Battery.

While the MTA did conduct airflow testing by releasing a harmless gas into the New York subway system in 2013, notice was provided to riders well in advance by both that agency and Brookhaven National Laboratory. Posters purporting to be official MTA service change notices were in fact the work of pranksters, and the NYPD did not tell riders to "stay calm." Due to a lack of complete dates, the posters have been recirculated online in 2015, two years after the completion of the testing they reference.