Does This Video Show a Motorcyclist Evading Police by Jumping Over a Train Track?

A video of a motorcyclist jumping over a train track certainly appears real, but key context is missing. 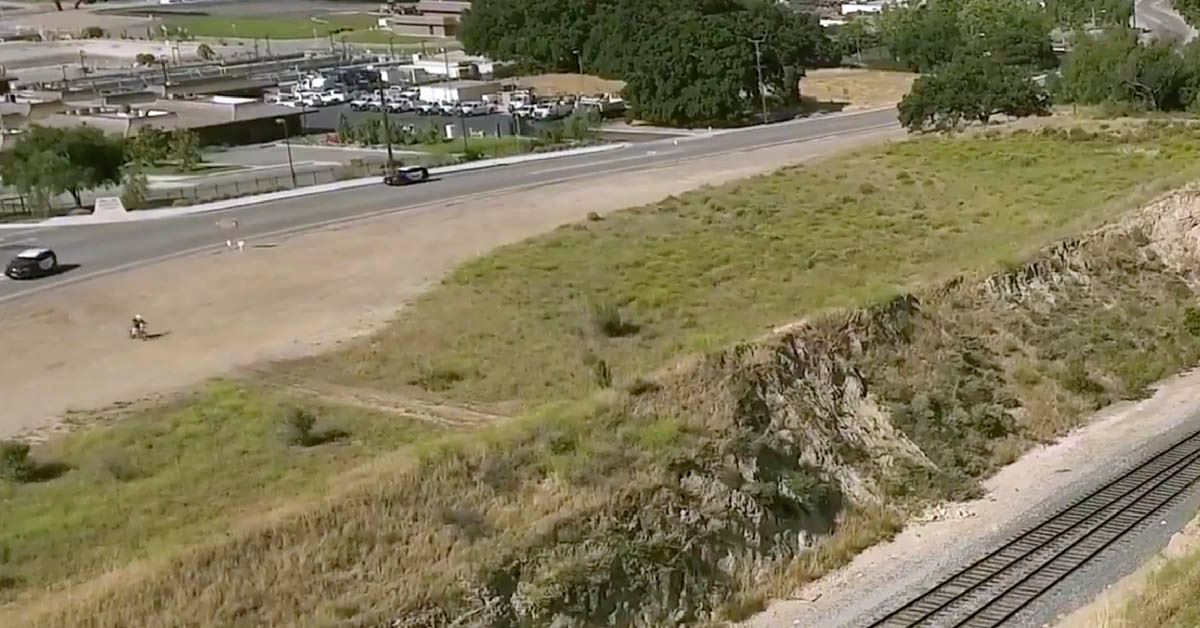 Claim:
A video shows a motorcyclist evading police by jumping over a train track.
Rating:

A video shows a motorcyclist driving past police cars and then jumping over a train track.

However, this is not an impromptu aerial maneuver but a professional's planned stunt, which police apparently were trying to stop.

Viral video of a professional motorcyclist's stunt is frequently shared online with the claim the motorcyclist is an ordinary person "evading" police by jumping over a train track:

The claim is true in the literal sense. But the video actually shows a professional motorcycle rider, Colby Raha, performing a planned stunt as police tried to stop him.

The back story of the stunt seen in this video actually starts in 2004, when motorcyclist Colin Morrison jumped across this same gap. Morrison's stunt, which was featured in the PowerBand Films video "On the Pipe 1," also featured a moving train:

Motorcyclist Kyle Katsandris attempted to recreate Morrison's jump in 2017 for Powerband Films video "On the Pipe 7." Katsandris' attempt, however, was unsuccessful and landed the 24-year-old stuntman in the hospital:

A motocross rider whose jump over a freeway in Riverside County last month became an Internet video sensation was critically injured Sunday after performing a dangerous off-road stunt over train tracks, police said

Kyle Katsandris, 24, of San Clemente, planned to jump “an expanse across railroad tracks” in the 500 block of West Los Angeles Avenue, according to the Simi Valley Police Department. But at some point, the stunt went horribly wrong.

Emergency responders were called to the scene and Katsandris was taken to a hospital in “critical, but stable condition,” police said.

A few months after Katsandris' unsuccessful attempt, Raha turned up to this location for a turn at the jump. But it appears police were alerted to Raha's attempt and tried to stop him from jumping the tracks.

The stunts by Morrison, Katsandris, and Raha are all featured in the following clip from Powerband Films:

We should note these stunts typically require a lot of preparation, not only for the stunt itself, but also for the camera crew to work out a plan to get the best footage. A behind-the-scenes video for "On The Pipe 7" shows that the Powerband Films camera crews used drones, and sometimes helicopters, in order to film these stunts. If you look closely on the hill near Raha's landing spot, you can see a person filming the stunt.

To sum up: This video does not show an ordinary citizen making an impromptu decision to evade police by jumping over a train track. The viral video instead appears to show police officers trying to stop a planned stunt shortly after another motorcyclist was injured performing a similar jump.

We reached out to Raha, Powerband Films, and the Simi Valley Police Department, and we will update this article if more information becomes available.