Articles and rumors claimed that a majority of anti-Trump demonstrators did not vote in the very election they protested. 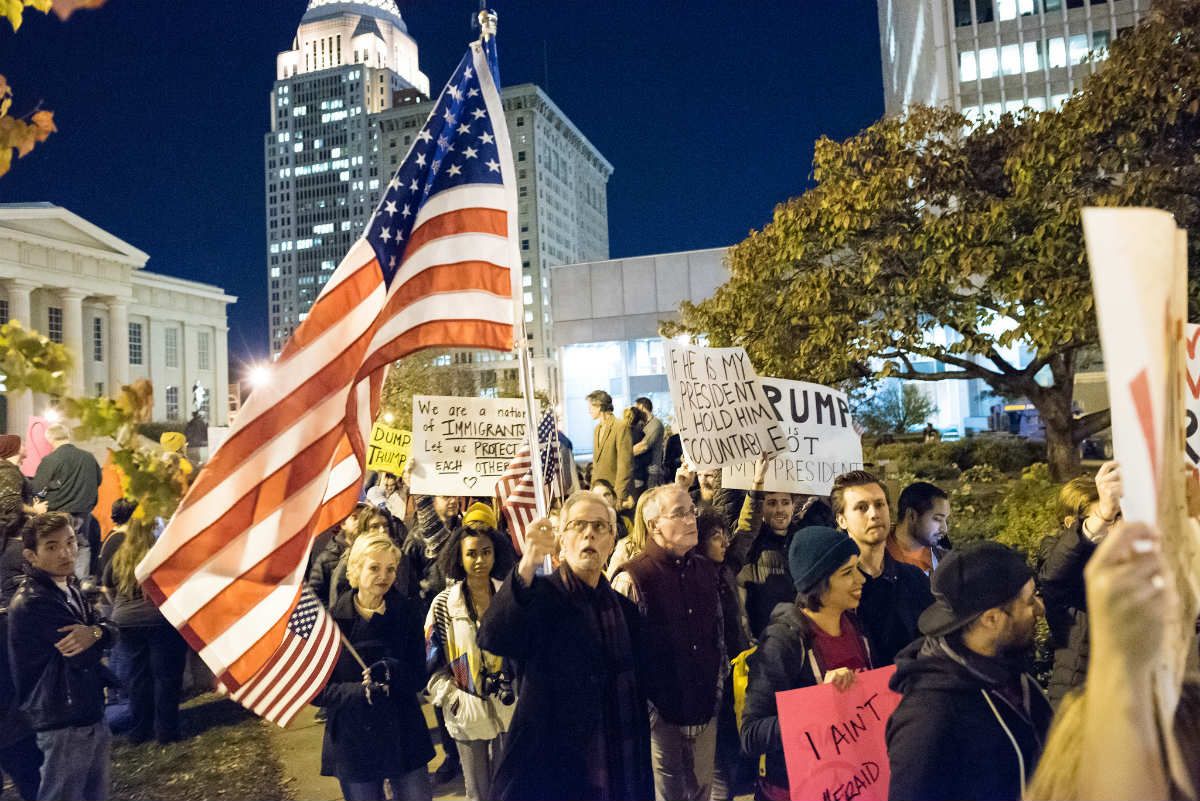 Claim:
A majority of anti-Trump protesters did not vote in the 2016 general election.
Rating:

An Oregon-based news outlet claimed it checked voter activity against a list of arrests and determined that a majority did not vote at all in the 2016 general election.

The data omitted important variables; the information only included 112 people arrested in Portland and not all protesters in all anti-Trump demonstrations.

Protesters took to the streets after Donald Trump took the majority of electoral votes in the 8 November 2016 presidential election.  Rumors soon followed on the heels of the demonstrations that a majority of those out on the streets had not bothered to participate in the very election that they were protesting.

The first version of the claim appeared to originate with Oregon-based news outlet KGW. On 14 November 2016, the station reported that it had (for unstated reasons) checked the names of protesters arrested in Portland against state election records, and determined that 69 of the 112 people arrested had not bothered to cast a vote at all in the 2016 general election.

KGW's original article did not offer any information about the date range of the protests, whether the 112 individuals referenced had been arrested on the same night, the precise way the station determined that they did not vote, and the size of the protest versus the number of people arrested. It reported:

More than half of the anti-Trump protesters arrested in Portland didn’t vote in Oregon, according to state election records.

At least sixty-nine demonstrators either didn’t turn in a ballot or weren’t registered to vote in the state.

KGW compiled a list of the 112 people arrested by the Portland Police Bureau during recent protests. Those names and ages, provided by police, were then compared to state voter logs by Multnomah County Elections officials.

Records show 34 of the protesters arrested didn’t return a ballot for the November 8 election. Thirty-five of the demonstrators taken into custody weren’t registered to vote in Oregon.

Twenty-five protesters who were arrested did vote.

KGW is still working to verify voting records for the remaining 17 protesters who were arrested.

As of 13 November 2016, KPTV reported that 110 people were arrested from the beginning of the protests until then (including 71 just that day). That claim led to a number of creative interpretations and rumors, such as one that half of the protesters arrested in Oregon were from out of state (and were presumably paid agitators). That iteration cited a false rumor that 70 percent of protesters arrested in Charlotte in September 2016 were not locals; as it turned out, 80 percent of Charlotte arrestees were from the city itself (with most semi-local). However, their base data originated with KGW's 14 November 2016 report.

Per that report, 112 people were arrested in Portland on or around 13 November 2016. Of those arrestees, 25 voted in the 2016 general election in Oregon and 34 did not return a ballot but presumably were registered to vote in the state of Oregon (those two groups totaled 59 of the 112 people counted by KGW). Of the balance of those arrested, 35 were not registered to vote in the state of Oregon ("out-of-state protesters") and 17 arrest records were not verified against election records. An addendum noted that one of the original 35 registered non-voters was registered to vote and cast a ballot in neighboring Washington State, for a total of 112 individuals.

There were a number of reasons that even if the claims checked out completely in a mathematical sense, the statistics might not have illustrated what they appeared to show. No scale was given for the protests, and it was extremely difficult to say both how large the protests may have been versus the number of people arrested or whether that number of people served as an accurate representative sample of the protesters as a whole. Only 34 of the 112 arrested protesters were registered to vote but purportedly didn't (30 percent). Seventeen protesters (15 percent) were of uncertain status, and it was possible that one in five of the 112 cited arrestees did vote and that information was unvalidated. 35 of the protesters were not registered to vote in the state of Oregon, but that does not mean they may not have voted elsewhere.

We contacted the Oregon Secretary of State's office to ask about the rumors. A spokesperson told us that the office "[had] not independently confirmed whether some of [the purported non-voters] voted in other states" and directed us to a piece published by The Oregonian about the viral rumor. That item identified several mitigating factors, and held off on a final verdict pending clarification on some of the missing pieces to the story:

There's no specific time period when someone living in Oregon must register to vote here instead of their home state, he said. That's particularly common among out-of-state college students.

So it's possible that some or all of those 36 people who weren't registered in Oregon could have voted in other states.

What's more, Sample said, a state-by-state search would be necessary to determine whether those 36 people are registered elsewhere.

The Election Division also wasn't able to account for the voter participation of five protesters because it lacked middle names for those people or birth dates.

Of the 112 protesters who were arrested, four were under age 18 -- in other words, too young to vote.

As the piece pointed out, the claim that more than half of protesters (or a majority) did not vote in the 2016 general election remains unproven. Of the 112 people in the sample of arrestees, 36 may have been registered in states other than Oregon at the time of their participation in the protest, and a number of those protesting might have been college students registered to vote in their home states; four of the 112 were under the age of 18.

Five of the 112 were not accounted for in voter databases due to missing information, and of the entire sample an amended 34 (not 35 or 36) were purportedly registered to vote in the state of Oregon but did not return ballots. At very best, it seemed that 34 of the 112 arrestees were registered to vote but did not cast a ballot in the 2016 general election (but still, that information was not fully vetted or verified).

Finally, the claim was often condensed to "protesters," when post-election demonstrations occurred in cities across the United States. The scope of KGW's check of election records was restricted to the state of Oregon and the city of Portland, bearing little relevance to the overall proportion of voter participation among demonstrations nationwide.