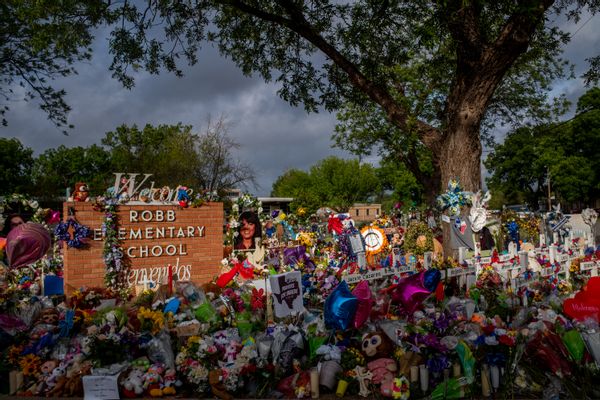 The Facebook post contained a number of falsehoods and unsupported rumors. The post concluded, without evidence, that the entire Uvalde school shooting was a false flag meant to provide leverage "so that our Second Amendment can be ended." It contained no sources, links, or citations of any kind.

In early June 2022, Facebook users copied and pasted posts that began with the words, "More oddities re: TX school shooter." These posts made a number of unsupported claims about Salvador Ramos, the 18-year-old gunman in the deadly school shooting at Robb Elementary in Uvalde, Texas. Unverified rumors thrived in the aftermath of the tragic killing, as we previously reported. Nineteen children and two teachers died in the mass shooting, which took place on May 24, 2022.

The text in the viral Facebook messages was copied and pasted, a type of post we refer to as copypasta. LeadStories.com also fact-checked what may have been the original post that led to the following variation (screenshot):

No coincidence !!
Copied and pasted from a friend.
More oddities re: TX School Shooter, for your information:
He was an 18 year old who lived with his grandma. Had a part-time job at McDonald's (8 hours a week), minimum wage. He dressed in expensive women's clothes. He dropped out of school because he was obsessed with video games.
Had a Brand new expensive game console. A brand new F250 pickup “fully loaded.” His weapons: 2 Brand new Daniel Defense (brand) AR15/M4 rifles, with Military grade Optics. Each rifle is between 3,000 and 4,000 dollars. Thousands of rounds of expensive Military grade ammunition. A thousand dollar bullet proof vest. All from a part time job at McDonald's…?!?!?!?
Ford F250 Platinum $71,000.00
Game Console $500.00
Rifles $6000.00/$8,000.00
Optics $1000.00
Ammo $900.00
Body Armor $1000.00
TOTAL - $80,400.00
On Minimum Wage ??!!
Seems to me SOMEONE WAS FUNDING HIM and training him as well… And oh - he just happens to have known the Buffalo shooter? Seriously?! Someone is TRAINING these so-called ""shooters" …. And those rifles were EXACTLY like one of the rifles from the Las Vegas "shooter". EXACTLY -- down to the optics, AND the vertical fore-grip. And that particular configuration is (legally) only available to "Military and Law Enforcement" … the only conclusion one can arrive at is that there is someone TRAINING these miscreants so that our Second amendment can be ended.
And just before the NRA Convention, how timely…
Copied and pasted

It's true that Ramos was an 18-year-old who lived with his grandmother -- one of the few accurate statements in the post.

The post next claimed that Ramos had been employed by McDonald's. However, CNN and The New York Times both reported that he had worked for a different fast food restaurant chain: Wendy's.

The line in the "more oddities re: TX school shooter" Facebook post that said Ramos "dressed in expensive women's clothes" appeared to refer to a debunked conspiracy theory that he had identified as transgender. (A variation of the Facebook post also falsely used the words "transvestite ILLEGAL" to describe Ramos.)

According to The Washington Post, it's true that Ramos dropped out of school. We also found reporting from The New York Times that said he played video games, including Call of Duty and Fortnite. However, we have yet to locate any details that confirmed Ramos dropped out because he was "obsessed" with video games. We also have yet to find information that verified the rumor about Ramos supposedly owning "a brand new expensive game console."

The Facebook post mentioned purported details about the truck Ramos crashed near the school on the day of the shooting. CNN.com published a close-up picture of the truck that was photographed by Pete Luna with The Uvalde Leader-News.

The post claimed the truck was a "brand new" Ford F-250 Super Duty Platinum that Ramos had bought and owned himself. However, ABC News reported that the truck found at the scene was a 2008 Ford F-150. The Daily Beast also published that the truck was owned by Ramos' grandmother, who he shot prior to driving the vehicle near the school.

The next part of the post said that Ramos had purchased and taken into the school "two brand new Daniel Defense (brand) AR15/M4 rifles with military grade optics." It also claimed: "Each rifle is between 3,000 and 4,000 dollars. Thousands of rounds of expensive military grade ammunition. A thousand dollar bullet proof vest."

The Houston Chronicle reported that one of the weapons Ramos took into Robb Elementary was "a Daniel Defense DDM4 V7 rifle, which retails for $1,870." ABC News published that the rifle was "modeled after the M4 carbine, the U.S. military’s go-to rifle." ABC News also reported that, "according to pictures of the shooter’s guns posted on Instagram, he appears to have purchased a battery-powered holographic sight that typically sells for around $725."

The Chronicle reported that the other gun brought into the school by Ramos was "a Smith & Wesson MP 15, which retails for about $1,300." The article from the Chronicle said that Ramos purchased "hundreds of rounds of ammunition," not "thousands" as the Facebook post claimed. (We have not yet been able to find any information about the cost of the tactical vest that was confirmed as having been worn by Ramos at the school.)

The rest of the "more oddities re: TX school shooter" Facebook post delved into falsely labeling the school shooting as a false flag. The post claimed, without evidence, that "someone was funding" Ramos and was involved in "training him" as well, all to provide leverage to "end" the Second Amendment.

The post also said that the "exact" same kind of guns Ramos used were found in the possession of Stephen Paddock in Las Vegas. In 2017, Paddock killed and injured scores of concertgoers from a high-floor window of a Vegas hotel room. ABC15.com reported that 24 guns were found in the hotel room. It's true that the list showed that Paddock used a Daniel Defense DDM4V11, similar to Ramos' DDM4V7. However, this wasn't "exactly" the same gun, as charged by the Facebook post. We also found no evidence that Paddock carried a Smith & Wesson M&P15 like Ramos had with him at Robb Elementary.

Lastly, the post charged, again without evidence, that Ramos knew Payton S. Gendron, the alleged shooter in deadly mass shooting at a grocery store in Buffalo, New York, which occurred on May 14, 2022. We found no evidence that Ramos knew Gendron.

In sum, the "more oddities re: TX school shooter" Facebook post contained quite a lot of falsehoods and unsupported rumors. For this reason, we have chosen an overall rating of "Mostly false."

Note: In addition to the aforementioned victims of the Uvalde school shooting, Joe Garcia, the husband of slain teacher Irma Garcia, also suffered a fatal heart attack two days after the incident. A family member attributed his death to grief.