Did One of Roy Moore's Accusers 'Forge' Yearbook Evidence Against Him? 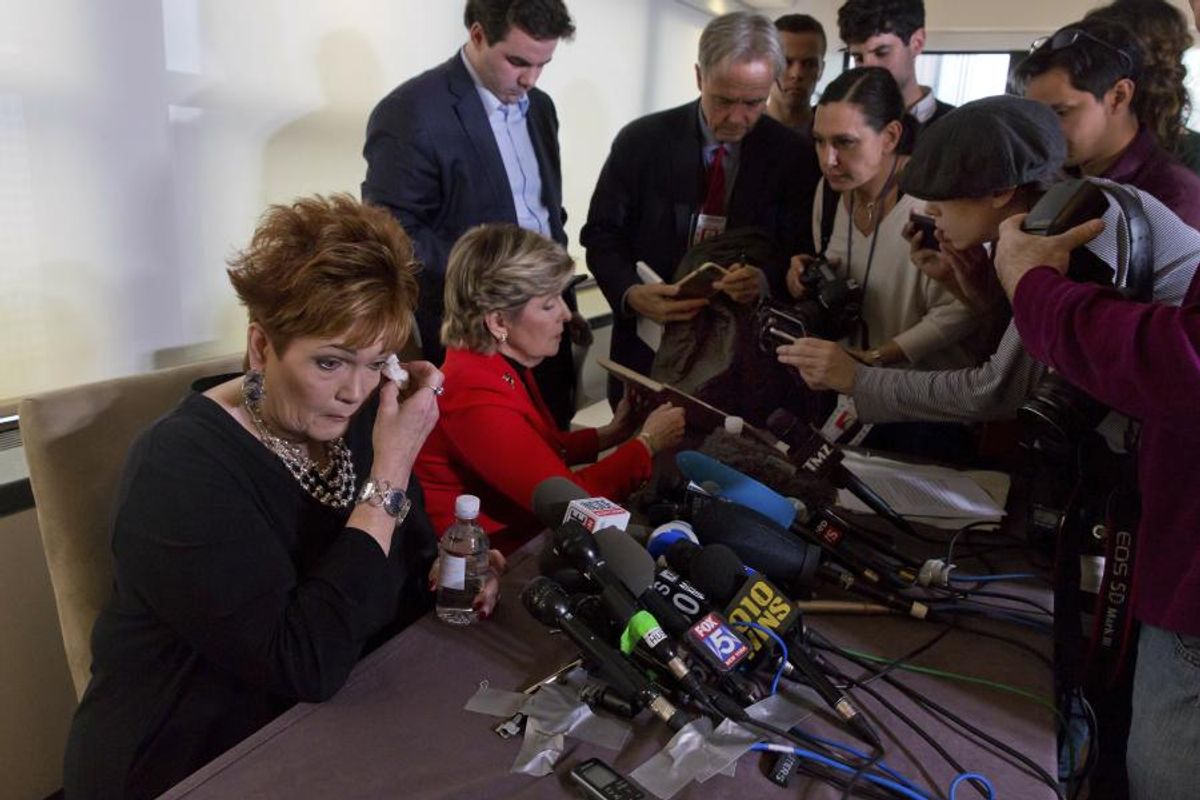 Beverly Young Nelson acknowledged that she had added annotations to Moore's 1977 inscription and signature in her high school yearbook.

Nelson did not admit that she "forged" either the inscription Moore wrote or his accompanying signature.

In November 2017, the run-up to an election to fill a vacant U.S. Senate seat in Alabama became one of the most contentious political issues of the year when multiple women came forward and accused the Republican candidate, a former district attorney and state judge, of sexual assault.

One of those women, Beverly Young Nelson, maintained that Moore had tried to force himself upon her when he was 30 and she was just a 16-year-old high school student:

Beverly Young Nelson says she was working as a waitress at the Olde Hickory House in Gadsden, Ala., in 1977 and the then-district attorney was a regular customer who often tried to gra​​b her long red hair and flirt.

One night, he offered to drive her home and she trusted him because he was the DA — but once she got in the car, he parked next to a dumpster behind the restaurant, Nelson said at a Manhattan press conference with attorney Gloria Allred.

“I tried to open my car door to leave, but he reached over and locked it so I could not get out. I tried fighting him off, while yelling at him to stop, but instead of stopping, he began squeezing my neck, attempting to force my head onto his crotch. I continued to struggle. I was determined that I was not going to allow him to force me to have sex with him. I was terrified. He was also struggling to pull my shirt off,” she said.

“I thought that he was going to rape me. I was twisting and struggling and begging him to stop. I had tears running down my face,” Nelson said.

When he finally gave up, Moore allegedly told her: “You are a child. I am the district attorney of Etiwah County. If you tell anyone about this, no one will believe you.”

He then let her out of the car and he sped off.

Moore claimed in response that he didn't even know Nelson, but she offered a contrary piece of evidence documenting that he did — her high school yearbook, which Moore had signed below the inscription "To a sweeter, more beautiful girl I could not say 'Merry Christmas'" just weeks before the alleged attack: Moore's signature in the yearbook was followed by the abbreviation "D.A." (for "district attorney"), with the "12-22-77" and "Olde Hickory House" written below it (signifying the time and place of the signing).

Moore's defenders, including attorney Philip Jauregui, contended that the yearbook inscription was a forgery, asserting that Moore's signature had been lifted from a court document, that the handwriting appeared inconsistent in style, and that Moore would not have written "D.A." after his name since he was only an assistant district attorney at the time:

Jauregui said that he is sending a letter to Allred demanding that she and Nelson turn over the yearbook itself and subject the message to an analysis by a handwriting expert.

"Is it genuine? Or a fraud?" Jauregui said, urging the public to compare the yearbook against Moore's handwriting themselves. "Judge Moore says there's no way in the world that that's his handwriting … I'm asking you all to take a look and make a judgment."

About three weeks later, Nelson admitted to a Good Morning America reporter that she herself had added the wording below Moore's name in order to “remind herself [of] who Roy Moore was, and where and when Mr. Moore signed her yearbook.”

Critics immediately seized upon the admission and maintained that Nelson had "lied," that she had "tampered with Moore's signature," and even that she had "admitted she forged the yearbook": Although some misunderstanding or misrepresentation certainly surrounded Nelson's claims, the language with which they were commonly characterized in right-wing news reports was itself hyperbolic and inaccurate. Nelson didn't "lie" about the annotations (she hadn't claimed that Moore had written them himself, although neither had she previously explained that he hadn't), she didn't "tamper" with Moore's signature (other than possibly appending the abbreviation "D.A." to it), and she didn't "forge" (i.e., fraudulently create) any portion of the yearbook or its contents.

Fox News, at least, corrected their account to note that Nelson had acknowledged adding notes to the yearbook rather than "forging" Moore's inscription, as Fox had originally reported:

Fox News has since updated the story with a note at the bottom of the piece while removing any references to “forgery” in it.

"An update to this story reflects that Beverly Young Nelson admits writing what ABC News characterized as 'notes' beneath what she says is Roy Moore’s signature, and that the only notes below the signature are the date and location.

"Furthermore, the headline on [the] story now specifies that Nelson admits to writing part of the inscription herself, rather than forging part of it."

At a subsequent news conference, Nelson's lawyer, Gloria Allred, released the findings of a handwriting analyst who concluded that the signature on the yearbook inscription did indeed belong to Roy Moore.