Does a photograph of Neil Armstrong's spacesuit show that the tread of his boots didn't match the "footprints" he supposedly left on the moon? 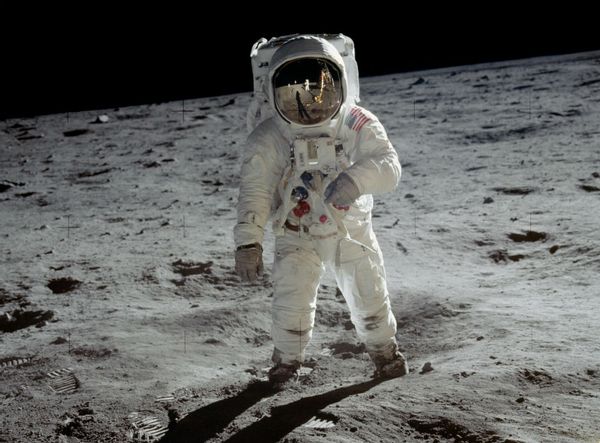 Claim:
The boots on Neil Armstrong's spacesuit don't match up with the "footprints" supposedly he left on the moon.
Rating:

The Apollo 11 mission has been fodder for conspiracy theorists ever since the lunar excursion module (LEM) touched down on the moon's surface on 20 July 1969. We've already debunked several of the rumors holding that it (and all of the subsequent NASA moon landing missions) were elaborate hoaxes staged at terrestrial facilities, but in August 2016 we came across a new item that suggested proof of a faked moon landing could be found by examining the boots of astronaut Neil Armstrong, the first man to walk on the moon: The photographs included in the graphic displayed above are both real: Neil Armstrong's spacesuit is shown on the left, and his lunar footprints can be seen on the right. The photograph of Neil Armstrong's Apollo 11 spacesuit was taken in 2015 by astronomer Phil Plait, as the historic garment was being preserved by the Smithsonian’s National Air and Space Museum, and the Apollo 11 astronauts photographed themselves and the lunar terrain (including their footprints) as they walked on the moon.

However, the footprint seen above wasn't made by Neil Armstrong, but rather by fellow astronaut Buzz Aldrin, who accompanied Armstrong to the moon. Aldrin snapped that photograph of his own footprint to allow scientists to study the tensile strength of the lunar surface, and that photograph matches the tread on Aldrin's boot, as documented in a picture taken by Armstrong as Aldrin descended the ladder from the LEM to the moon's surface: In any case, the tread on Armstrong's boots also matched the imprints seen in the lunar surface footprint photographs. While Armstrong did wear the suit pictured above for much of the Apollo 11 mission, he and Aldrin donned a few extra pieces of gear before stepping onto the moon's surface — including two large overshoes (with treaded soles): This overshoe went over the regular boot area on the space suit version used on the Moon, called the A7LB Space Suit. The shoe provides extra protection from rips, tears, and dust to the basic space suit. These overshoes left the distinctive footprints, which are still on the Moon to this day.

Photographs of the Apollo 11 lunar landing clearly show Armstrong wearing these overboots on the surface of the moon: