Is Monsanto Suppressing Evidence of a Cancerous Herbicide in Food?

A laboratory test performed by food activists went viral, but its results and the allegations drawn from them were not reliable. 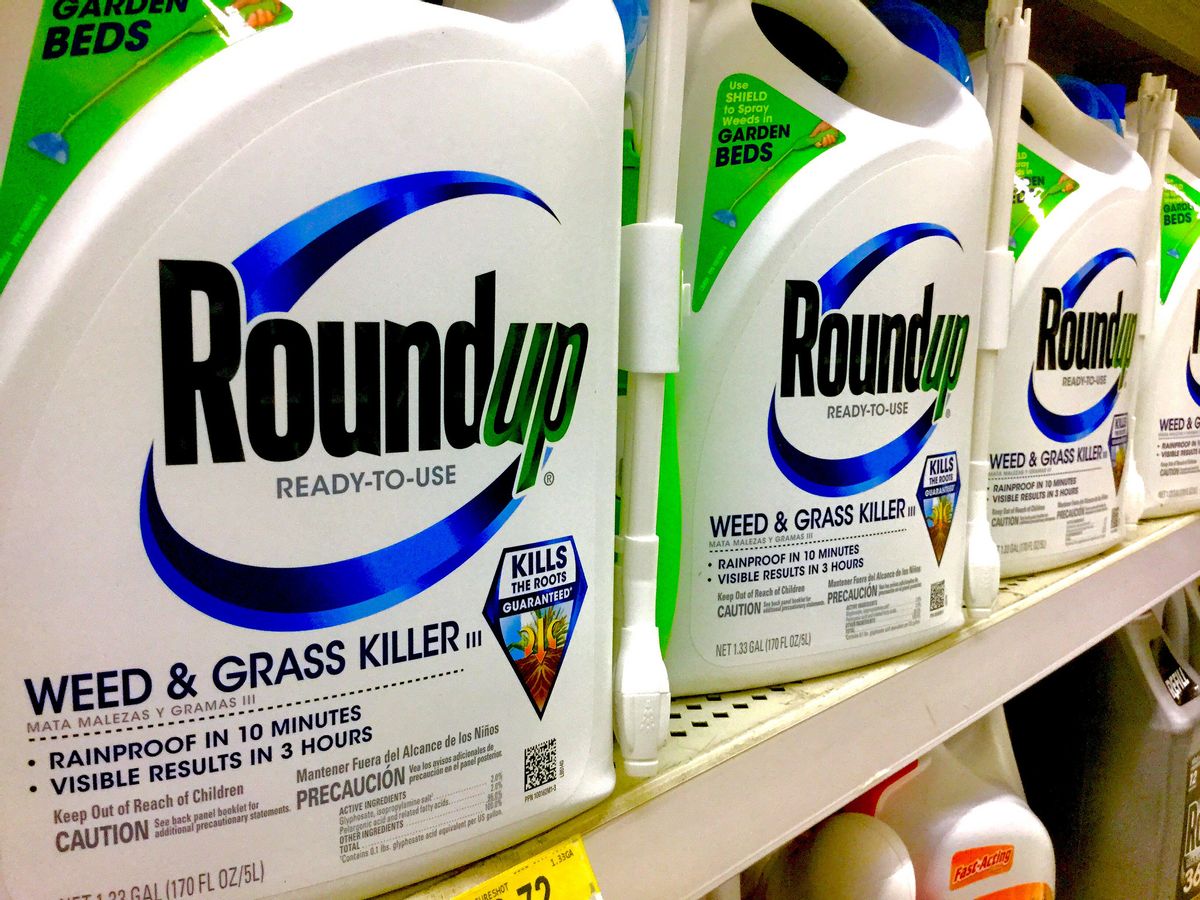 Claim:
A new analysis of the residue on common American foods showed high levels of the herbicide glyphosate and Monsanto, the EPA, and the FDA are in cahoots to silence word of the chemical’s harmful effects and its high concentration in foods.
Rating:

Note: On 10 August 2018, a jury assembled in California Superior Court in San Francisco found Monsanto (which is now part of the pharmaceutical company Bayer) liable for a 46-year-old groundskeeper’s development of Non-Hodgkin lymphoma. For more information on that ruling, and how it relates to glyphosate residue in food, please read our August 2018 explainer on that case.

On 15 November 2016, the natural food evangelist and alternative health guru known as the Food Babe posted a report from a natural food activist group named Food Democracy Now that alleged to demonstrate common American foods contain high levels of glyphosate, a chemical in Monsanto’s RoundUp herbicide and the most prevalent weed-killer on the planet.

Her post and the report it highlights are a new addition to the contentious political debate about the chemical’s harm to humans and the environment, as well as the potential influence of large companies like Monsanto on regulatory agencies, that has been ongoing for decades.

Glyphosate is widely applied to crops around the world — especially genetically modified crops specifically bred to be resistant to the chemical, per the National Pesticide Information Center:

Glyphosate is an herbicide. It is applied to the leaves of plants to kill both broadleaf plants and grasses. The sodium salt form of glyphosate is used to regulate plant growth and ripen fruit. Glyphosate was first registered for use in the U.S. in 1974. Glyphosate is one of the most widely used herbicides in the United States. People apply it in agriculture and forestry, on lawns and gardens, and for weeds in industrial areas. Some products containing glyphosate control aquatic plants.

Regulatory agencies have gone back and forth on its safety ever since it was registered for use. The idea, which has been verified by observations, is that glyphosate runs off into the water supply, where it can be ingested directly, or consumed after it leaves a residue on food.

The first assessment of glyphosate’s carcinogenic potential was undertaken by the United States Environmental Protection Agency in 1985. Based on studies done primarily with rodents, they classified the chemical as “a Group C (Possibly Carcinogenic to Humans: Agents with limited animal evidence and little or no human data) carcinogen” in 1986. After a series of additional investigations, which included industry sponsored studies, the EPA reclassified the chemical in 1993 as “Group E carcinogen (signifies evidence of non-carcinogenicity in humans).”

A majority of the data used to demonstrate evidence of harm comes from studies in which environmentally unrealistic concentrations of glyphosate were exposed to rats, mice, and fish. Some recent studies have demonstrated potentially adverse effects at low exposure levels but the validity of these results have been called into question by other researchers.

Although a March 2015 review by the WHO's International Agency for Research on Cancer suggested glyphosate may have some carcinogenic potential, the current consensus amongst the world’s regulatory agencies is that it is safe for consumption and non-carcinogenic at environmentally relevant levels, with the WHO concluding:

Glyphosate is unlikely to pose a carcinogenic risk to humans from exposure through the diet.

Still, a 2014 report from the US Government Accountability Office compelled the FDA to set up an initiative to monitor food for glyphosate residue, a decision met by praise by environmentalists and food activists. As reported by the Huffington Post’s Carey Gillam, however, the effort was halted due to a lack of agreement on standardizing the analyses:

The FDA’s residue testing for glyphosate was combined with a broader herbicides analysis program the FDA set in motion in February of this year. But the glyphosate testing has been particularly challenging for the FDA. The agency was finally forced to put the glyphosate residue testing part of the work plan on hold amid confusion, disagreement and difficulties with establishing a standard methodology to use across the agency’s multiple U.S. laboratories, according to FDA sources. Equipment issues have also been a problem, with some labs citing a need for more sensitive instruments, sources within FDA said.

This is where the Food Babe’s unsubstantiated narrative comes into the picture. Based primarily on the fact that the FDA canceled its residue testing program, along with results from various studies performed on animals, she alleges a nefarious connection between the FDA and Monsanto, the developer of the RoundUp:

When it comes to the FDA, they are not protecting the American public from glyphosate either. After announcing in February that they would FINALLY begin testing foods for glyphosate residues, they just decided to suspend their testing this week. Could it be that Monsanto didn’t like the results they started getting – especially since the FDA found glyphosate in foods that should be especially safe like BABY FOOD? Monsanto will do whatever it takes to keep that story out of the public eye.

While there are conflicts of interest arguments to be made about the use of industry sponsored studies or petitions to influence regulators, there is no evidence to suggest the FDA halted its testing program in response to pressure from Monsanto.

Instead of providing evidence of the alleged connection, the Food Babe presented the results of non-peer reviewed lab tests performed on various food items at the behest of the activist group Food Democracy Now and the research platform The Detox Project, alleging it exposed high levels of the herbicide on common foods:

A FDA-registered food safety laboratory tested iconic American food for residues of the weed killer glyphosate (aka Monsanto’s Roundup) and found ALARMING amounts. Just to give you an idea of how outrageous these amounts are, independent research shows that probable harm to human health begins at really low levels of exposure – at only 0.1 ppb of glyphosate. Many foods were found to have over 1,000 times this amount! Well above what regulators throughout the world consider “safe”.

The statement about 0.1 ppb being the lower limit for harm to human health is controversial, as only one of the studies listed as providing support for that claim actually tested an amount that low; the test was performed on mice, not humans, and it used the word "potential", not "probable".

It is also important to note that many of the results they reported are actually marked with the note that they "may not represent an accurate representation of the sample."

The lab results commissioned by Food Democracy Now claimed to show residue values on common American foods that were well above 0.1 ppb; but the methods employed are not elucidated, and its important to remember that the FDA limit is four orders of magnitude greater than the threshold they claim.

A final point to note is that the report was commissioned by two groups with a stated agenda, as declared in its introduction:

The testing and analysis was performed at the request of FOOD DEMOCRACY NOW!, in coordination with THE DETOX PROJECT, which gathered additional scientific evidence from around the world and included a compendium of independent research on glyphosate.

According to their website, "Food Democracy Now! is a grassroots community dedicated to building a sustainable food system that protects our natural environment, sustains farmers and nourishes families."

The Detox Project is a research initiative that is currently focused specifically on glyphosate, according to their mission statement:

There is no evidence to suggest the FDA shut down its residue program due to complaints from Monsanto. While scientists and regulators have and continue to debate methods for assessing and testing potential harm from glyphosate, the broad scientific consensus is that it is not a risk; and the un-reviewed results of a questionable laboratory exercise do not change that assessment.

NOTE: This story has been updated based on discussions with a number of scientists in the field. It was originally listed as a MIXTURE, but we have now reclassified it as FALSE in response to concerns that our original narrative might have led viewers into taking the results of an activist group's lab analyses as a scientifically rigorous addition to the debate.

detoxproject.org.   "About The Detox Project."

Williams, G.M., et al.   "A Review of the Carcinogenic Potential of Glyphosate by Four Independent Expert Panels and Comparison to The IARC Assessment."     Critical Reviews in Toxicology.   September 2016.

Meyers, John Peterson.   "Concerns Over Use of Glyphosate-Based Herbicides and Risks Associated With Exposures: A Consensus Statement."     Environmental Health.   17 February 2016.