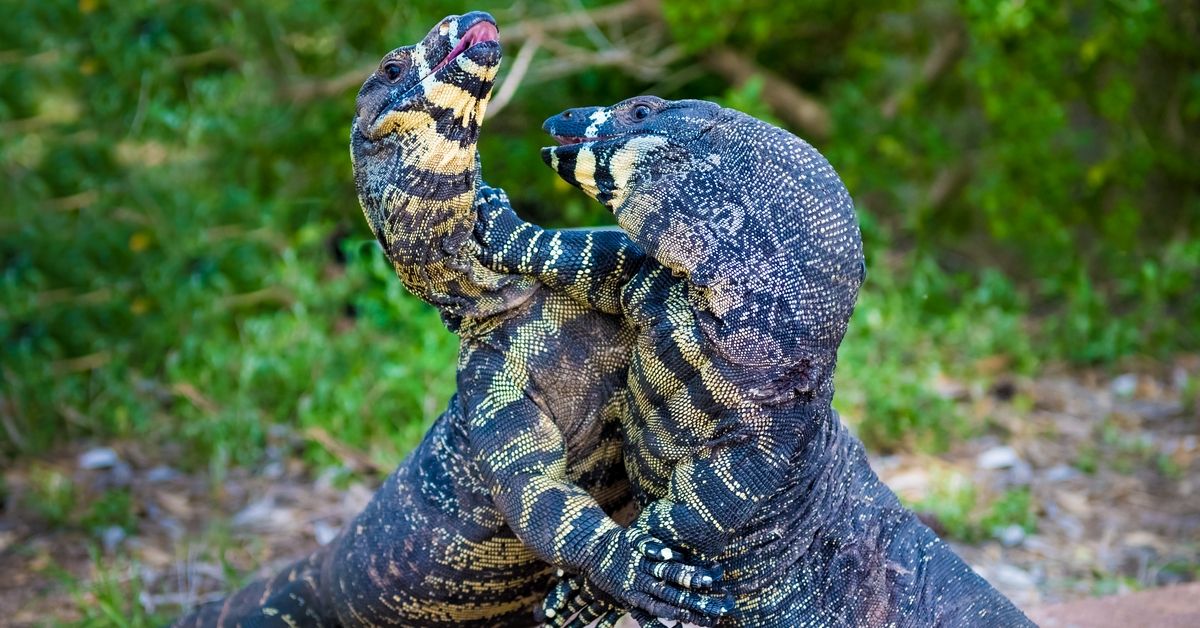 Such videos are authentic, but the monitor lizards are wrestling, not hugging.

A popular Reddit post of a video posted in mid-August 2022 claimed to show two monitor lizards “hugging.” Though we want to believe these two lizards found comfort in each other’s arms, our job is to tell the truth. The video, which appears to be authentic, shows the two reptiles wrestling — not hugging.

Monitor lizards are beasts known to wrestle one another in competition over food, territory, and potential mates. Similar videos have surfaced on the internet, like the one below that shows a lizard duo standing on two feet, wrapped with the other’s forearms:

National Geographic has dubbed such interactions as the “lizard version of ‘Clash of the Titans,’” noting that the lizards can wrestle for up to 45 minutes.

Florida Fish and Wildlife Conservation Commission calls monitor lizards “fierce wrestling competitions with other males for mating opportunities.” Scientific name Varanus, monitor lizards measure from less than a foot long to over 8 feet. The Komodo dragon, which is a type of monitor lizard, is the largest living lizard and can grow to over 300 pounds. Mostly terrestrial, some of these tropical lizards are capable of swimming, according to the Honolulu Zoo.

“Wrestling can also occur where they will stand on their hind legs and thrash their bodies, sometimes biting and clawing at each other,” notes University College London.

With long sharp claws and strong jaws, monitor lizards use their tails to intimidate their combatants and are known to wrestle on two feet while hissing loudly, inflating their bodies, and often raising their hind legs just before attacking.

Monitor lizards are carnivorous reptiles that live in forests and mangrove swamps, according to the National Parks Board of Singapore. The lizards hunt insects and smaller fish, as well as scavenge food sources. They possess glands that secrete venom used to kill prey, that has a relatively mild effect on humans. The biological database Animal Diversity Web adds:

There is a diverse range of intraspecific communication exhibited by V. bengalensis through touching, biting, clawing and wrestling. Being solitary predators, roughly three quarters of encounters begin as purely investigatory and the remaining quarter are for the purpose of sex and courtship. Conflict between males, whether over food or mating, usually results in an initial investigation through acquiring each others scents and their intent. Conflict typically involves vocalization which is usually a hissing noise accompanied by the monitor inflating its upper body to appear larger. Tail-slapping and whipping is also common behavior between males and sometimes females to establish dominance. Encounters between males can lead to wrestling in which case both males stand on their hind legs and embrace each other while thrashing their heads and upper bodies. Occasionally biting and clawing can occur during wrestling but it is usually collateral damage rather than intentional.

crinnoire. “? Two Monitor Lizards Hugging. Is This Too Much to Ask For?” R/NatureIsFuckingLit, 10 Aug. 2022, www.reddit.com/r/NatureIsFuckingLit/comments/wknx1h/two_monitor_lizards_hugging_is_this_too_much_to/.

“Did a Komodo Dragon Get Stuck in a Convenience Store?” Snopes.Com, https://www.snopes.com/fact-check/komodo-dragon-convenience-store/. Accessed 25 Aug. 2022.

“NowThis on Instagram: ‘HUG IT OUT? Two Wild Monitor Lizards Locked Their Arms in a Battle over Territory in Thailand — and It’s at Once Ferocious and Kinda Cute? The Two Reptiles Held up Traffic on the Roadway for Almost 30 Min before Taking Their Dispute Elsewhere. “I Had to Adjust to Avoid Them. I Thought They Were Boyfriends and Girlfriends at First but Then Someone Told They Were Actually Fighting,” Said Driver Kot Thanatpan, via Newsflare. #lizards #reptiles #thailand.’” Instagram, https://www.instagram.com/reel/ChpRSOVs_Ki/. Accessed 25 Aug. 2022.