Could the 'Mother of All Bombs' Produce Radioactive Fallout?

While we cannot prove a negative, there are few mechanisms by which a MOAB-like bomb would benefit by the addition of anything that would introduce radioactivity. 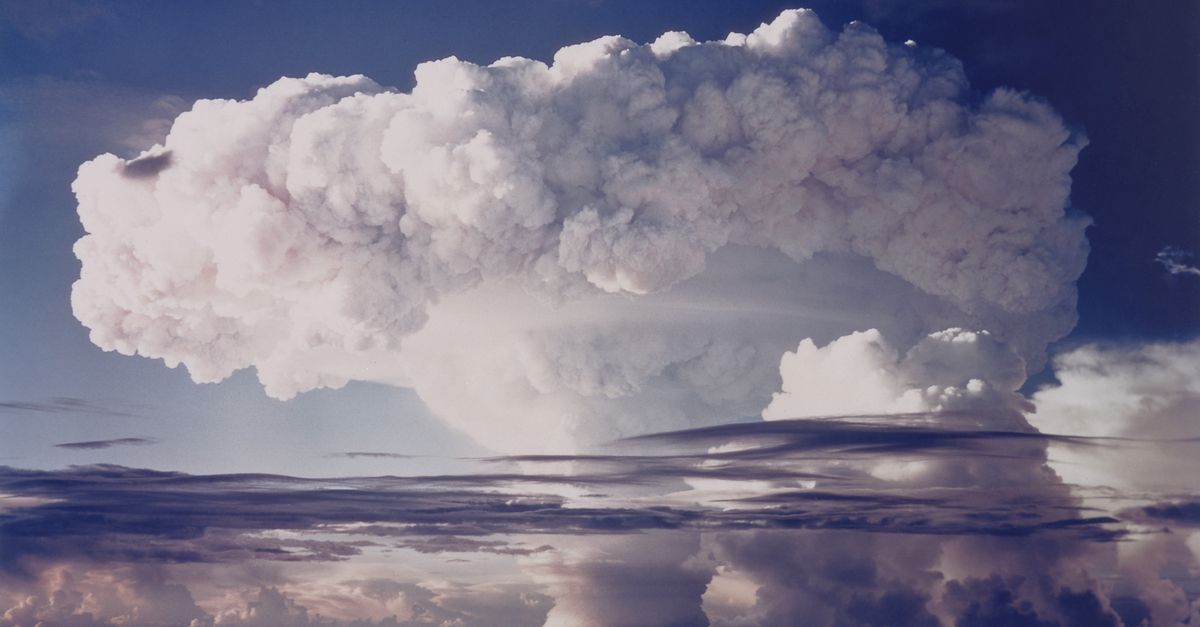 Claim:
The Massive Ordnance Air Blast, first used by the United States military in April 2017, is capable of releasing toxic radiation into the atmosphere on a global scale.
Rating:

On 13 April 2017, the United States dropped the largest non-nuclear weapon ever deployed in combat — the GBU-43/B Massive Ordnance Air Blast, referred to by its retronym the "Mother of All Bombs.' In response, investigative journalist Amber Lyon posted to Facebook her recommendation that people take iodine tablets and other precautions, because the U.S. government is hiding the true harm caused by the weapon:

The reality is Trump just bombed ALL of us. The toxic radiation and energetic trauma from this bomb will circle the globe within the next 24 hours and enter all of our bodies and environments, shortening our lives — not just those precious humans living in Afghanistan.

I recommend immediately taking iodine, spirulina, and lots of chlorella in order to mitigate the effects on your health. 'Non-nuclear' does not mean no radiation! There are many non-nuclear bombs packed with depleted uranium and toxic chemicals. [...]

The U.S. may say this bomb is not radioactive, but the U.S. cannot be trusted to reveal the true content of its bombs that are often laced with horrific chemicals and radiation. The government has been caught lying repeatedly to the public about the toxic content of its bombs and their harmful effects.

Lynn’s claims appear to rest on two largely factual (but not necessarily relevant) assertions: First, that the MOAB is a big bomb; and second, that the United States has used radioactive material in its non-nuclear arsenal in the past.

MOAB Is a Big Bomb

The MOAB is the largest conventional (i.e., non-nuclear) weapon ever dropped in combat. A fairly simple bomb that took only nine weeks to develop in the leadup to the 2003 invasion of Iraq, 18,700 pounds of its total 22,500-pound mass (or 8,482 out of a total of 10,205 kilograms) come from its BLU-120/B warhead, according to the 2013 USAF Almanac produced by Air Force Magazine.

The warhead itself, delivered by a satellite guidance system, is simply a tank filled with a high-energy explosive dubbed H6, which is a mixture of cyclotrimethylene trinitramine, TNT and aluminum (though some outlets report the use of a similar explosive named tritonal). Its yield, equivalent to 11 tons of TNT, however, pales by many orders of magnitude in comparison to any nuclear bomb used in combat or included the US Nuclear arsenal, as noted by Axois:

Much was said about the MOAB being the most powerful non-nuclear bomb ever used in combat, but that comparison can overstate its size — it's just 0.073% as powerful as the nuclear bomb dropped on Hiroshima and modern nuclear weapons are many times stronger than that.

Indeed, the W87 thermonuclear warhead widely deployed in the current United States arsenal is reported to possess a 300 kiloton yield. Still, despite its significantly lower yield, the MOAB is a deeply destructive tool. It was built primarily as a successor to the “Daisy Cutter”, which was employed during the Vietnam War to clear massive areas of thick forest.

Its simple warhead ignites just above its target, producing a supersonic shockwave meant to clear massive areas of fighters, IEDs, and other defenses. This approach differs from a bunker-busting bomb, made to penetrate a building or the ground, as discussed by Wired magazine in an article following the 2017 MOAB bombing:

In trying to understand what makes the MOAB different, it’s helpful to understand what it isn’t. Aside from not being a nuclear weapon, it’s also not a penetrator or “bunker buster,” meant to burrow deep into the ground. Rather, it’s a concussive bomb designed to explode aboveground and create a massive blast.

This distinction is an important one, as it is directly relevant to the main arguments offered by Lyon — that it is likely the United States military would have included non-disclosed radioactive material to the bomb to add to its destructive capabilities.

In response to numerous comments on her Facebook post, Lyon repeatedly shared the same report, authored by Barbara Koeppel in the Washington Spectator, about the use of radioactive materials in weapons employed in Iraq:

The weapons were first used in 1991 during Desert Storm, when the U.S. military fired guided bombs and missiles containing depleted uranium (DU), a waste product from nuclear reactors. The Department of Defense (DOD) particularly prized them because, with dramatic density, speed, and heat, they blasted through tanks and bunkers. [...]

Though the article makes factual points regarding the use of radioactive materials in conventional weapons, its arguments are, broadly speaking, irrelevant to the MOAB. This is because the MOAB is neither a bunker-busting bomb nor is it, in fact, a thermobaric bomb.

A thermobaric bomb is a very specific type of weapon that, similar to a Daisy Cutter or a MOAB, creates damage though a blast wave, but unlike those weapons does so in a two-stage process that first disperses fuel, then ignites that fuel in combination with the oxygen present in the air, increasing its deadly impact with a one-two punch of a massive shockwave and the removal of oxygen.

This process is described in a Human Rights Watch report on the use of the most common class of thermobaric weapon — the fuel-air explosive — by Russia in the Chechen conflict of the late 1990s:

A typical fuel air explosive device consists of a container of fuel and two separate explosive charges. After the munition is dropped or fired, the first explosive charge bursts open the container at a predetermined height and disperses the fuel in a cloud that mixes with atmospheric oxygen (the size of the cloud varies with the size of the munition). The cloud of fuel flows around objects and into structures. The second charge then detonates the cloud, creating a massive blast wave.

As mentioned in the Washington Spectator report, the United States did deploy a fuel-air explosive weapon in the caves of Afghanistan in 2003. A piece for the Weekly Standard about that incident later stated that this variation on a fuel-air bomb was specifically designed to penetrate into bunkers or, more specifically, cave systems, necessitating a protective shell:

But the BLU-118/B [...] takes the fuel-air bomb to the next level. First, the warhead is encased in a 2,000-pound bunker-busting bombshell. Rather than exploding over a widespread area above ground, the BLU-118/B penetrates deep into the ground, through concrete barriers, and then ignites everything inside .

While — to be clear — the United States says that both the BLU-118/B used in 2003 or the MOAB used in 2017 do not make use of depleted uranium, it would make significantly more sense for a thermobaric bunker-busting bomb like the one used in 2003, as depleted uranium retains its sharpness even when penetrating thick bunkers, per Foreign Policy:

Depleted uranium is left over from the enrichment of uranium 235. It is exceptionally hard, and has been employed by militaries both to penetrate armored targets and to reinforce their potential targets like tanks against enemy fire. Though less radioactive than the original uranium, DU is toxic and is considered by the U.S. Environmental Protection Agency to be a “radiation health hazard when inside the body.”

Such a substance could conceivably be warranted for a bomb designed to explode underground, but it would be extremely counter productive for MOAB both from an added weight perspective as well as an explosion dampening perspective, as alluded to by Wired:

Most conventional bombs [...] will be some small percentage of explosive and a much larger part casement that will kill people by bursting apart into a thousand pieces. The MOAB takes the inverse approach.

Its objective? Create a blast big enough to reach deep into areas that other conventional bombs can’t. [...] “The MOAB is just a shock wave,” Cancian says. A shock wave so big that it would cover 150 meters.

For these reasons, and even if you are skeptical of the United States record of being less than forthright about their use of depleted uranium in the past, the idea that MOAB, specifically, would employ depleted uranium makes little sense.

Further, as MOAB’s main destructive capabilities come from an air shock wave and not from the direct destruction of rock (another conceivable source of trace amounts of uranium dust), there are few mechanisms by which the weapon could introduce anything radioactive on a local, let alone global, level.

In other replies to her post, Lyon seems to suggest the global aspect of her argument is less scientific than spiritual:

All bombs poison all of us on the planet as we are all energetically connected. Whether it's radiation, chemicals, or another's trauma, we are all poisoned. A bomb dropped is a bomb dropped on us ALL.

This statement is a far cry from her earlier calls for everyone on Earth to take iodine tablets, but it is as philosophically impossible to address as her original claim. Repeatedly, Lyon challenges her detractors to “prove” that the United States is not lying about the effects of the MOAB, shifting the burden of proof away from her own argument, possibly because the only evidence she provides are her observations that the bomb is big, and that the U.S. has used depleted uranium in the past

While we cannot prove a negative (the logical fallacy that Lyon's argument lives and dies on), we can state that it would be counterproductive for the MOAB to contain depleted uranium. Comparisons to nuclear fallout, while a good way to get attention for a Facebook post, also erroneously imply that MOAB’s yield approaches anything near that of a nuclear bomb. For these reasons, we rate Lyons claim of global radioactive effects from MOAB as unproven, but unlikely.