Was MLK Smothered in His Hospital Bed?

Questions and speculation may always surround the assassination of Dr. King, but this is not a credible example of that phenomenon. 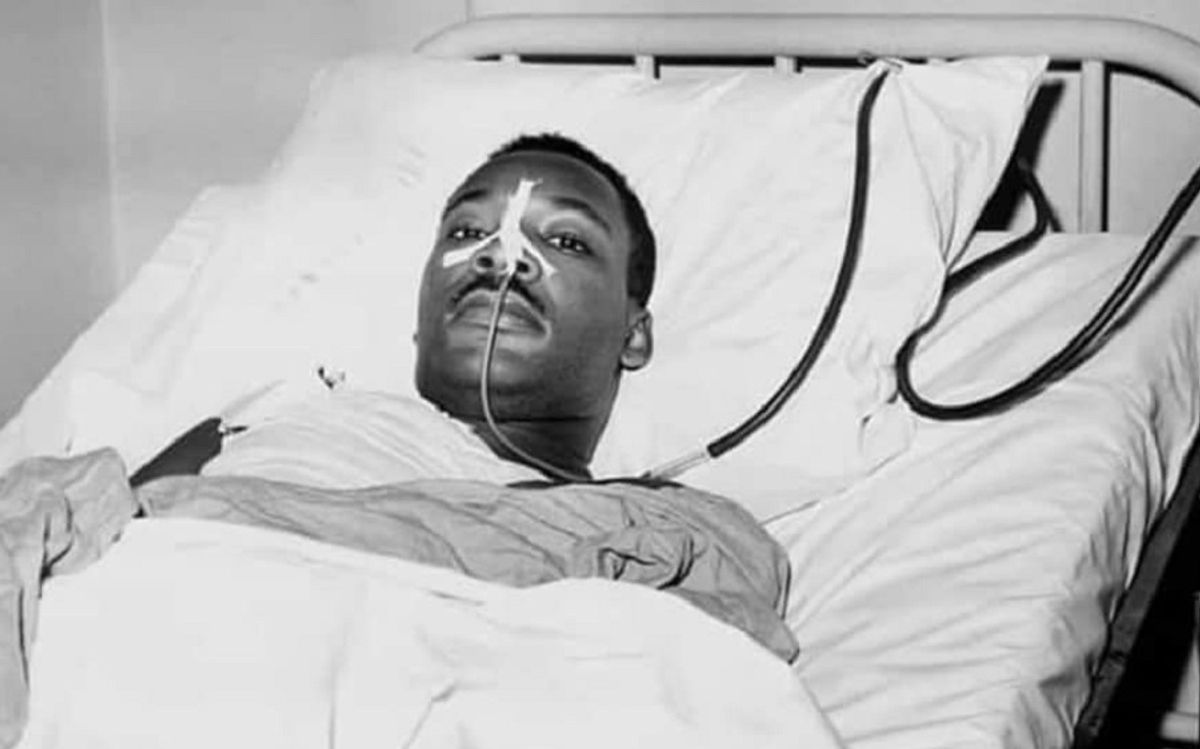 Claim:
A photograph shows MLK recuperating from a shooting just before he was smothered in his hospital bed.
Rating:

A much-circulated Facebook post displays a photograph of civil rights leader Dr. Martin Luther King Jr. in a hospital bed, with the claim that the picture was taken after he was shot. According to the post, King was not actually killed during an April 4, 1968, assassination attempt, but rather survived that shooting and was later "smothered by someone in the hospital." King's widow, Coretta Scott King, later "sued the state & WON!" and "in 1999 the U.S gov was found guilty in the court of law for conspiring to kill him": Nearly everything about this post is wrong or misleading, however.

First off, the referenced photograph does not show King recovering in a hospital bed from any type of shooting incident. The picture was taken in 1958 (ten years before King was shot and killed by assassin James Earl Ray in Memphis) and captures King recuperating after he was stabbed during a book signing at a Harlem department store and doctors had to remove a seven-inch letter opener from his chest.

On March 10, 1969, James Earl Ray pleaded guilty in Memphis, Tennessee, to assassinating King and was sentenced to 99 years in prison (and died in 1998 while serving out his sentence). Nonetheless, some thirty years later, King's family brought a wrongful death lawsuit seeking $100 in damages from someone else -- a Memphis restaurant owner named Loyd Jowers who, 25 years after the fact, inconsistently claimed he had been paid to hire a hit man to kill King, and then repudiated his claims when required to testify to them under oath.

As we note in our detailed article on the subject, after a rather farcical, one-sided trial that allowed for no other result, the jury returned a verdict in favor of King's family, holding that Loyd Jowers had participated in a conspiracy to kill King, declaring that “governmental agencies” were party to that conspiracy, and awarding plaintiffs $100 in damages:

John Campbell, an assistant district attorney in Memphis, who was not part of the civil proceedings but was part of the criminal case against Mr. Ray, said, “I’m not surprised by the verdict. This case overlooked so much contradictory evidence that never was presented, what other option did the jury have but to accept [plaintiff's] version?”

And Gerald Posner, whose recent book, “Killing the Dream” made the case that Mr. Ray was the killer, said, “It distresses me greatly that the legal system was used in such a callous and farcical manner in Memphis. If the King family wanted a rubber stamp of their own view of the facts, they got it.”

Regardless of whether one buys into conspiracy theories about exactly who shot King, the fact remains that the civil rights leader was felled by an assassin's bullet in Memphis on April 4, 1968; he did not survive that shooting only to be "smothered" in his hospital bed subsequently. And the photograph displayed above has nothing to do with King's shooting or death; it is a completely unrelated picture taken in a very different time and place.