Was Creator of 'Bernie Mittens' Taxed Out of Business?

That would be ironic considering the progressive senator's unabashed proposals to impose new taxes. 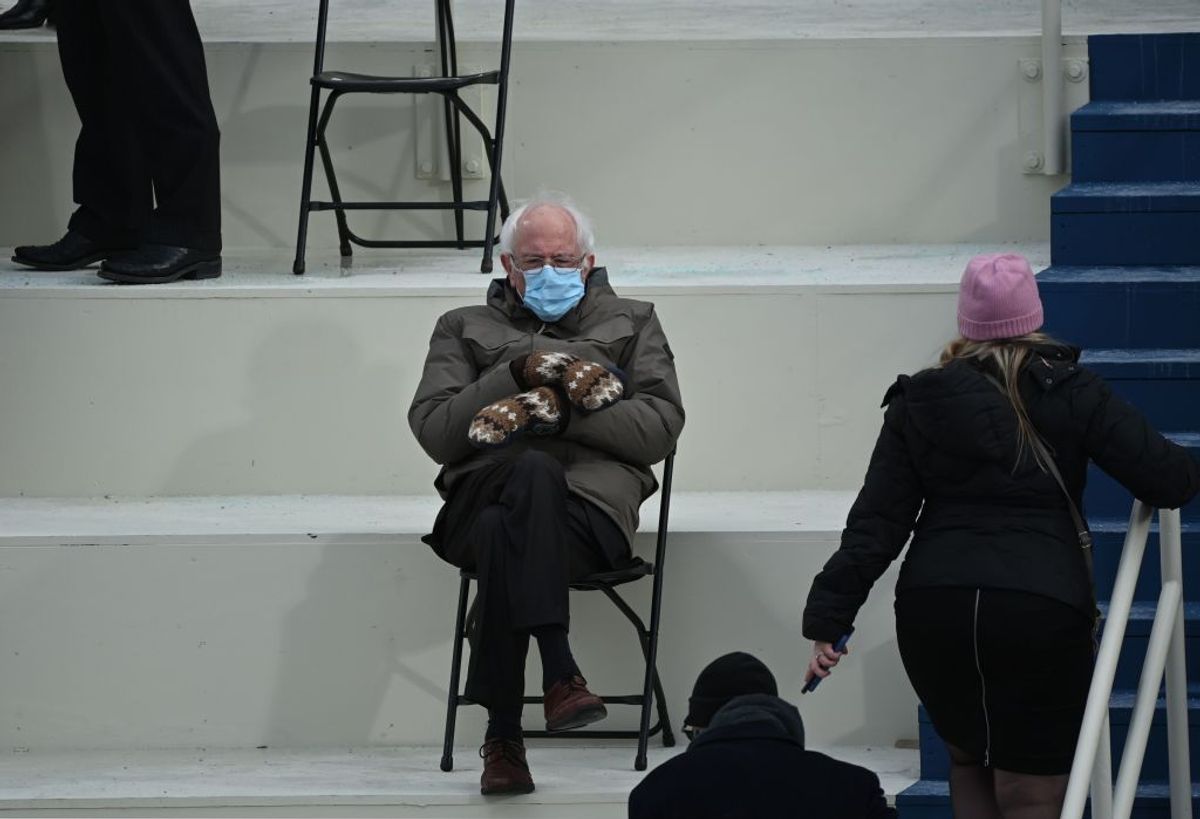 After Sanders was seen wearing some of Ellis' mittens at Joe Biden's inauguration, Ellis told Slate she previously had a "mitten business," but at some point mostly stopped selling the products because "it really wasn't worth it" with federal taxes on her net profits.

However, people continue to pay for Ellis' handmade wool mittens — or other products inspired by them — as of this writing. She was donating the sales to Vermont charities.

Before her viral fame, the size of Ellis' mitten business was unknown, as well as how long or via what methods she sold the handmade products.

As memes of U.S. Sen. Bernie Sanders wearing hand-crafted mittens at Joe Biden's presidential inauguration plastered the Internet in early 2021, rumors surfaced alleging that the creator of the mittens had stopped selling recycled wool products because of high federal taxes.

Snopes received numerous inquiries to investigate the validity of the claim, which attempted to expose hypocrisy of people who support the Vermont senator's goals of imposing new taxes to pay for various proposals, including free universal health care.

Here's some background: Jen Ellis, a Vermont elementary school teacher, said she made the mittens out of discarded wool sweaters and gifted them to the senator after he lost the Democratic presidential nomination to Hillary Clinton in the 2016 presidential race. "I sent him these mittens kind of as a shoutout to who he is, and I put a note in that said something to the effect of, 'I hope you run again,'" she told Slate. The viral image of Sanders wearing Ellis' gift and sitting with his arms and legs crossed made the teacher famous by the viral standards of 2021. She gave multiple interviews to news outlets including NPR and Slate in which she discussed her support for Sanders and reaction to the memes; social media users and other websites republished those comments, in part to harness the virality of the moment.

Among the latter group was The Federalist, an online hub of articles with a conservative bent. Two days after the inauguration, the website published a page with the headline, "Woman Behind Bernie Sanders' Iconic Mittens Quit Making Them Because High Taxes Killed Her Business," reading:

The Vermont school teacher who made Bernie Sanders’ mittens, featured in the most recent viral meme, said she had to stop making them after the federal government taxed her too much.

To support the claim, The Federalist cited a portion of Ellis' interview with Slate. According to a transcribed version of that conversation, which Slate published on Jan. 21, the elementary school teacher indeed told writer Rachelle Hampton:

Hampton: Speaking of bittersweet, you supported Bernie. How did you feel about watching Biden be sworn in as president?

Ellis: Oh my gosh, I cried. I’m 42 and I’ve waited four decades of my life — I’m tearing up just thinking about it— to see a woman be vice president. I wish that she was president, although I think Biden is pretty great. [...]

And then there was this little side nagging thing of every five minutes I was getting several hundred more emails about the mittens. A year ago, when Bernie was on the campaign trail, he was wearing those mittens and Twitter buzzed about it then. I’m not really on Twitter—I have an account, but I don’t really participate — but a lot of my younger colleagues do and they were like, 'You’ve gotta check this out.' [...]

So I put it out there that I made the mittens, they were a gift, and they’re not knitted, they’re sewn from repurposed and up-cycled sweaters. At that time, I had 30 or 40 mittens for sale and being a little naïve about Twitter, I put my Gmail account on that, which someone picked up yesterday and retweeted it. People have been contacting me thinking that they can get mittens, and actually they can’t. I don’t have any more, and I don’t have much of a mitten business anymore because it really wasn’t worth it. Independent crafters get really taken for a ride by the federal government. We get taxed to the nth degree, and it wasn’t really worth it pursuing that as a business, even as a side hustle. I mostly just make them as gifts.

In other words, Ellis said she did not "have much of a mitten business anymore," or that she previously sold the handmade items for a price and then mostly stopped. She implied that federal taxes were a leading factor in her decision to make that change.

On Jan. 20, as social media lit up with the memes following the inauguration, she confirmed on Twitter that she was not selling mittens like the senator's. Snopes reached out to Ellis to learn more about her history of trying to sell mittens for profit and paying federal taxes as a self-described independent crafter. We have not yet received a response, but we'll update this report when or if we do.

All of that said, the size of Ellis' former business was unknown, as well as how long or via what methods she sold the handmade mittens. U.S. tax code requires all independent contractors — no matter if they use online marketplaces such as Etsy to sell handmade products — to pay local and federal taxes based on net profits.

Also, we should note here: Sanders' proposed changes to the country's tax system would repeal aspects of the 2017 Tax Cuts and Jobs Act so that taxpayers who earn between about $9,500 and $250,000 would pay about 4% more, and taxes on the country's top earners would generate the majority of revenue. Additionally, he wants to impose a new payroll on businesses that earn more than $2 million annually, a change that intends to protect ventures like Ellis' from paying more. (See here for a detailed breakdown of Sanders' tax proposal by Forbes.)

So while it was true that taxes played a role in Ellis' decision to stop charging people money for mittens prior to her viral fame, it was false to claim that she "quit" making them all together, like The Federalist headline alleged.

Between Jan. 23 and 24, she said in a series of tweets that she made three more pairs of "Bernie mittens," two of which she donated to Passion 4 Paws Vermont and Outright Vermont for fundraising and one that she was auctioning off to benefit her daughter’s college fund. After that, Sanders' official campaign began selling merchandise with the senator's meme-worthy image that Ellis made possible. The so-called "Chairman Sanders" sweatshirts, T-shirts, stickers, etc. helped raise $1.8 million for charitable organizations in Vermont over the course of five days, The Associated Press reported.

On Jan. 24, Ellis tweeted that the senator called her to tell her that "the mitten frenzy" had raised "an enormous amount of money" for the charities. Besides that evidence, it was unclear how, or to what extent, the teacher was involved in the making or selling of the campaign-official products featuring her mittens.

As further proof to debunk claims that she had ceased all mitten-making, the teacher on Jan. 27 announced that she had partnered with entities including Darn Tough Socks to make socks inspired by the viral mittens, and the following day she said she was in the process of another project "to get Bernie Mittens for ALL."

"I’m not opening a mitten factory or quitting my job as a second grade teacher! However, I am going to choose a new adventure on the side," Ellis said on her official website and GoFundMe page. "Never fear — I will make more mittens, but I won't be selling them for myself. I will be donating them to Vermont Charities to help them fundraise and make up for the funds lost due to the pandemic."

In sum, while it was true that, prior to her viral fame, Ellis mostly stopped charging people for handmade mittens due to costs including federal taxes, she was still creating the recycled wool products and people were spending money on them, as of this writing. For those reasons, we rate this claim a "Mixture" of truthful and misleading information.