Did Mitch McConnell Say One of His Proudest Moments Was Telling Obama 'You Will Not Fill This Supreme Court Vacancy'? 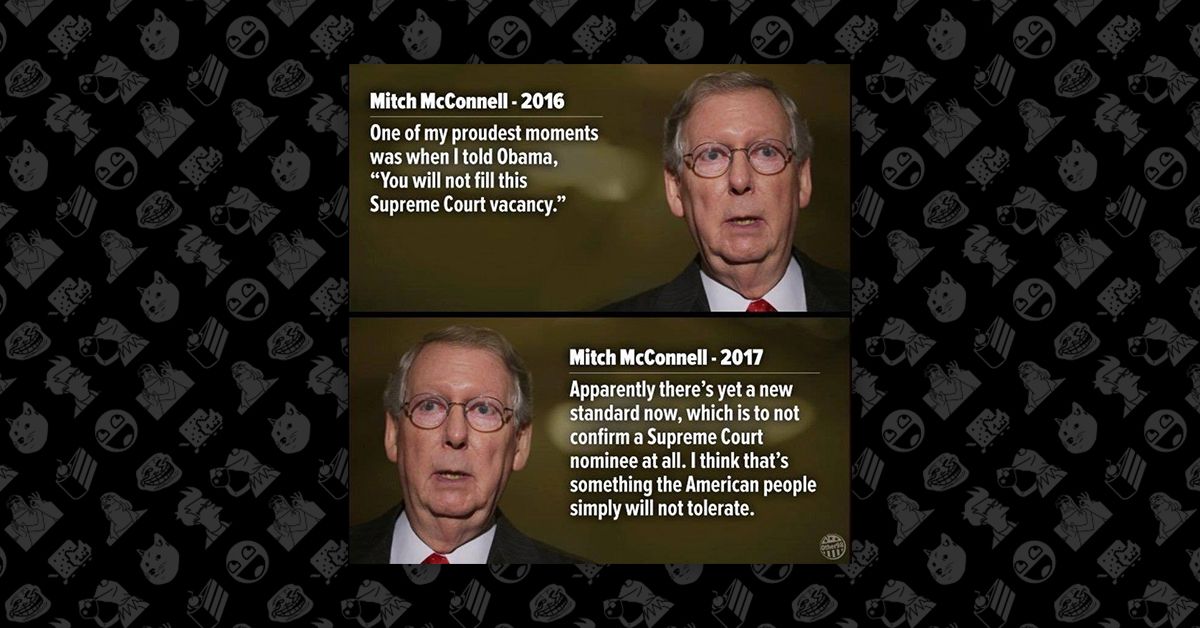 Claim:
In 2016, Senate Majority Leader Mitch McConnell said: "One of my proudest moments was when I told Obama, 'You will not fill this Supreme Court vacancy,'" and in 2017, he said, "Apparently there's yet a new standard now, which is not to confirm a Supreme Court nominee at all. I think that's something the American people simply will not tolerate."
Rating:

There is a time-honored procedure for appointing and confirming U.S. Supreme Court justices, who hold the job for life ("during good Behaviour," the Constitution specifies) and can only be replaced if they die, choose to step down, or are impeached and removed from office. The president is tasked by the Constitution with nominating and appointing new justices "by and with the Advice and Consent of the Senate," which means that in the event of a vacancy the president considers potential nominees, names one, then the Senate holds a hearing and votes to confirm or reject that nominee.

Over the past several decades — most historians date the trend beginning in 1987, when the Democratically-controlled Senate rejected Ronald Reagan's nomination of conservative U.S. Circuit Court judge Robert Bork — the appointment of Supreme Court justices has become increasingly politicized, with both the executive and legislative branches attempting to subject nominees to ideological litmus tests over and above their professional qualifications.

In March 2016, following the death of Associate Justice Antonin Scalia, a Reagan appointee and one of the more conservative voices on the court, President Obama nominated federal appellate judge Merrick Garland, who was described as "centrist" by the mainstream media and "left-leaning" by those on the right, to fill the vacancy. He did this despite the fact that Senate Majority Leader Mitch McConnell of Kentucky had already announced — on the day Scalia died — that the Republican-controlled Senate had no intention of confirming any nominee chosen by Obama:

The American people‎ should have a voice in the selection of their next Supreme Court Justice. Therefore, this vacancy should not be filled until we have a new President.

In an interview with CNN, McConnell stated that he did not expect the Senate to confirm an Obama nominee even if Democrat Hillary Clinton was elected president or Democrats won a Senate majority:

I can't imagine that a Republican majority Congress in a lame duck session after the American people have spoken would want to confirm a nominee opposed by the NRA, the NFIB, and the New York Times says would move the court dramatically to the left. This nomination ought to be made by the next president.

Six months later, as reported by the Washington Post, McConnell boasted to constituents at a 6 August 2016 political event in his home state of Kentucky about successfully blocking the nomination of Merrick Garland :

“One of my proudest moments was when I looked at Barack Obama in the eye and I said, ‘Mr. President, you will not fill this Supreme Court vacancy,'” he said to cheers at the annual Fancy Farm Picnic.

Obama's nomination of Merrick Garland expired when the 114th Congress ended its session on 3 January 2017. It was the longest period of time a Supreme Court appointment remained before the Senate in U.S. history.

Eleven days after President Trump's inauguration on 20 January 2017, he nominated U.S. Circuit Court of Appeals judge Neil Gorsuch to fill Scalia's vacancy. Democratic Senators vowed a fight, insisting for starters on keeping the rule that a majority of 60 votes be required for confirmation (which would mean that at least eight Democrats would have to vote "yea"), and threatening a filibuster.

Mitch McConnell, having been instrumental in blocking a previous Supreme Court nominee for the better part of a year, responded as follows: