Did AP Use the Spelling 'Missippi' in a Headline About Literacy? 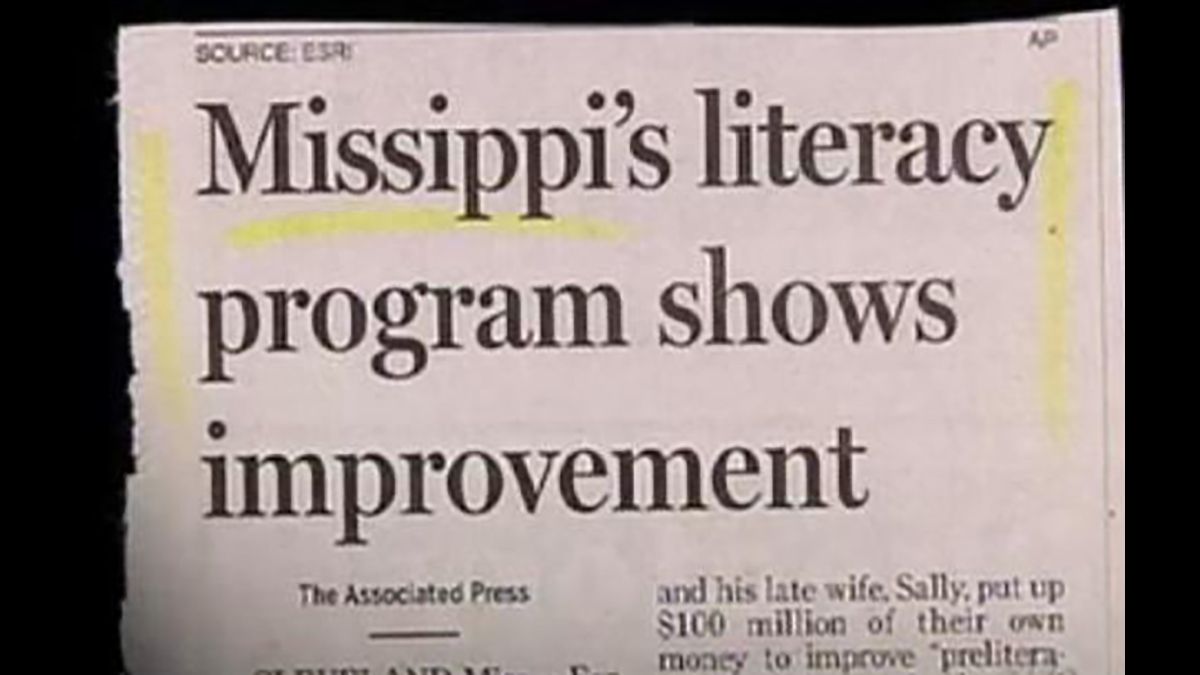 Claim:
The Associated Press misspelled the word Mississippi as "Missippi" in a headline about literacy.
Rating:

None of the newspaper archives that we looked at showed the misspelled headline for the same story. We also found no evidence that The Associated Press was responsible for the misspelling in the photograph. We reached out to the AP and they confirmed that the headline did not come from them. It's not uncommon for newspapers to change headlines for stories from wire companies.

Since at least 2010, a picture of a newspaper headline has been shared on websites and social media. The headline read, "Missippi's [sic] literacy program shows improvement," which referred to the state of Mississippi. The most recent social media post we found was from Oct. 18, 2021. This story might bring to mind Jay Leno's old "Headlines" segment from his late-night show. The weekly bit involved displaying funny newspaper clippings for laughs. We didn't find the misspelled headline in any of the Leno clips that were available on YouTube.

According to the picture, the article below the headline came from The Associated Press (AP). However, was the headline also written by the AP? This was what we sought to find out.

For readers who may not be familiar with what the AP does, stories from the wire service are republished on websites and printed in newspapers across the world, including right here on Snopes.com.

The following words were also visible in the body of the story: "... and his late wife, Sally, put up $100 million of their own money to improve ..." This bit of text helped in the effort to track down when the body of the article was first published.

We searched newspaper archives on the handy website Newspapers.com for the words from the body of the story. The earliest date we landed on was June 12, 2005. It was credited to Associated Press journalist Emily Wagster Pettus and printed in The Greenwood Commonwealth, a newspaper in the state of Mississippi. However, it had a different headline: "Barksdale Reading Institute getting results in schools."

Following June 12, we found that the same story was printed with different headlines in quite a few newspapers.  The most common headline we saw was: "Mogul's literacy investment paying off in poverty-stricken Mississippi schools."

We found no newspaper that misspelled the word Mississippi as "Missippi." Further, we found it slightly odd that, according to Google's search results, the headline picture didn't find its way on the internet until five years later in 2010.

It's possible that a small newspaper that has not yet made available its archives to Newspapers.com accidentally printed the misspelled headline. It's also possible that the headline was printed as slang, something that has been written about the word "Missippi" before, since some residents in the state pronounce it that way. The picture could also have been doctored by someone looking to make a joke.

One Reddit user provided an interesting possible explanation of why the headline was spelled the way it was, although it could be considered to be a stretch: "They just shortened Mississippi because there are only two columns. "Missippi" is just the phonetic spelling for how they pronounce it down there."

The "Missippi's literacy program" headline picture has been reposted a seemingly endless number of times on Reddit over the years, perhaps as a way to make light of the state's national education ranking. One of the posts from June 2019 received more than 34,500 points and hundreds of comments. For readers unfamiliar with how significant this is, it meant that the photograph was one of the top submissions on the day that it was posted.

Quite a few Reddit users assumed the apparent error came from the AP, commenting: "Why would Mississippi be responsible for the AP's inability to spell Mississippi?" We found many more instances where the AP was blamed for spelling it as "Missippi." A search for "Missippi" on Reddit showed lots of reposts with comments that placed blame on the AP.

We found no evidence to support the claim that the AP messed up and misspelled Mississippi as "Missippi" in the headline about literacy. After contacting the AP, they confirmed that they did not write the headline. It's not uncommon for newspapers to alter the headlines for stories from wire companies. That may have been what happened here.

On Oct. 25, the rating for this claim was updated from "Research In Progress" to "False." We found no evidence that the AP wrote the "Missippi" headline. Further, the AP confirmed that it did not come from them. It's not uncommon for newspapers to change the headlines for stories from wire companies.