Are 9.7M Votes for Trump Missing in California? 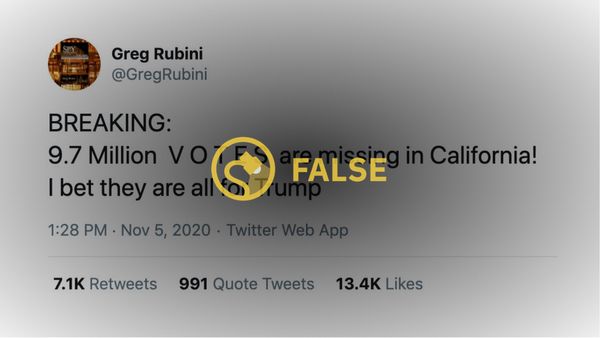 On Nov. 5, 2020, the Twitter account @GregRubini tweeted: "BREAKING: 9.7 Million V O T E S are missing in California! I bet they are all for Trump." After three hours, it had been retweeted 8,100 times and received 13,500 likes. It was also shared as a screenshot on Instagram and Facebook.

No evidence exists that 9.7 million California votes or ballots are missing. The tweet was unsourced, and the state of California had made no such announcement about "missing" votes. We were also unable to find statements from any Republican or Democratic state politicians voicing concerns about the subject of the tweet.

The claim in the unsourced tweet appeared to be made up.