Anastasiia Lenna is one of millions of Ukrainians impacted by Russia's war. 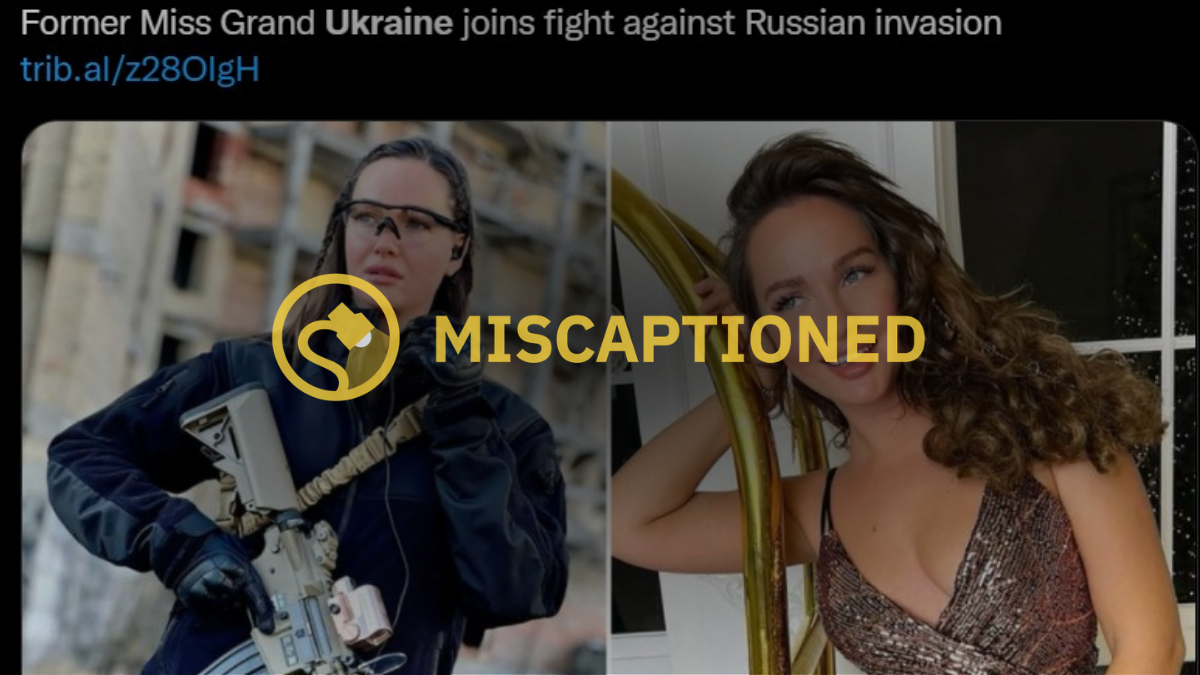 Claim:
A photograph shows former Miss Ukraine Anastasiia Lenna in combat gear in the fight against Russia's invasion of Ukraine in early 2022.
Rating:

In February 2022, a photograph of a woman holding a weapon was widely circulated on social media as if it showed former Miss Ukraine Anastasiia Lenna taking up arms after Russia's invasion of Ukraine: Both of these pictures truly show Lenna, who won Miss Grand Ukraine in 2015, but the picture on the left does not show Lenna taking up arms after Russia's invasion. This photograph shows Lenna with an airsoft rifle.

After Russia launched an unprovoked attack on Ukraine at the end of February 2022, Lenna posted a photograph of herself holding her rifle along with the hashtags #standwithukraine and #handsoffukraine. This led many to make the assumption that Lenna had actually joined the Ukrainian army, but that's not the case.

When the picture went viral, Lenna posted a follow-up message to explain that she wasn't actually in the military and that her post was just meant to show support Ukrainian forces.

I am not a military, just a woman, just normal human.
Just a person, like all people of my country.
I am also a airsoft player for years.
You can Google what #airsoft means.

All pictures in my profile to inspire people.
I had a normal life just on Wednesday, like millions people.

I don’t do any propaganda except showing that our woman of Ukraine - strong, confident and powerful.

I appreciate all attention and support to my country, all people in Ukraine we fight every day against Russian aggression.

I was born and live in Kyiv. This is my city.
Ukraine is my country ??

On February 24 Russian federation step on our lands and begin to kill civil people, women, children.

Ukrainian people have no guilt.
Non of us have any guilt.
We are on our lands!

I speak to all people of the World!
Stop war in Ukraine! No people should die!

We can stop all this together.
Share information about situation. Ask @nato to close sky!
Help us Ukrainian people to stop Russian aggression.

While Lenna isn't in the military, Ukraine's armed forces truly do involve a large number of women in combat roles. The CS Monitor reported that many women signed up for the military after Russia annexed Crimea in 2014, and they now make up almost 10% of the Ukrainian Armed Forces:

Women – in uniform and not – have been central to efforts to counter Russian aggression since 2014, when Moscow decided to annex Crimea and threw its support behind separatists in the Donbass region. Women now make up almost 10% of the Ukrainian Armed Forces, serve alongside men in combat positions, and are ensured “equal rights” with their male counterparts under a 2018 law. Since 2019, they have been able to study in military colleges to achieve higher ranks.

You can keep up on the latest rumors regarding Russia's attack on Ukraine here, and if you have questions about something you see online please send us a note.

Correction [4 March 2022]: The specific date this photograph was taken is unknown.