Does This Photograph Show a Misaligned Bridge?

'Survey-scale inaccuracy or positioning errors can lead to costly construction mistakes such as bridge misalignment.' 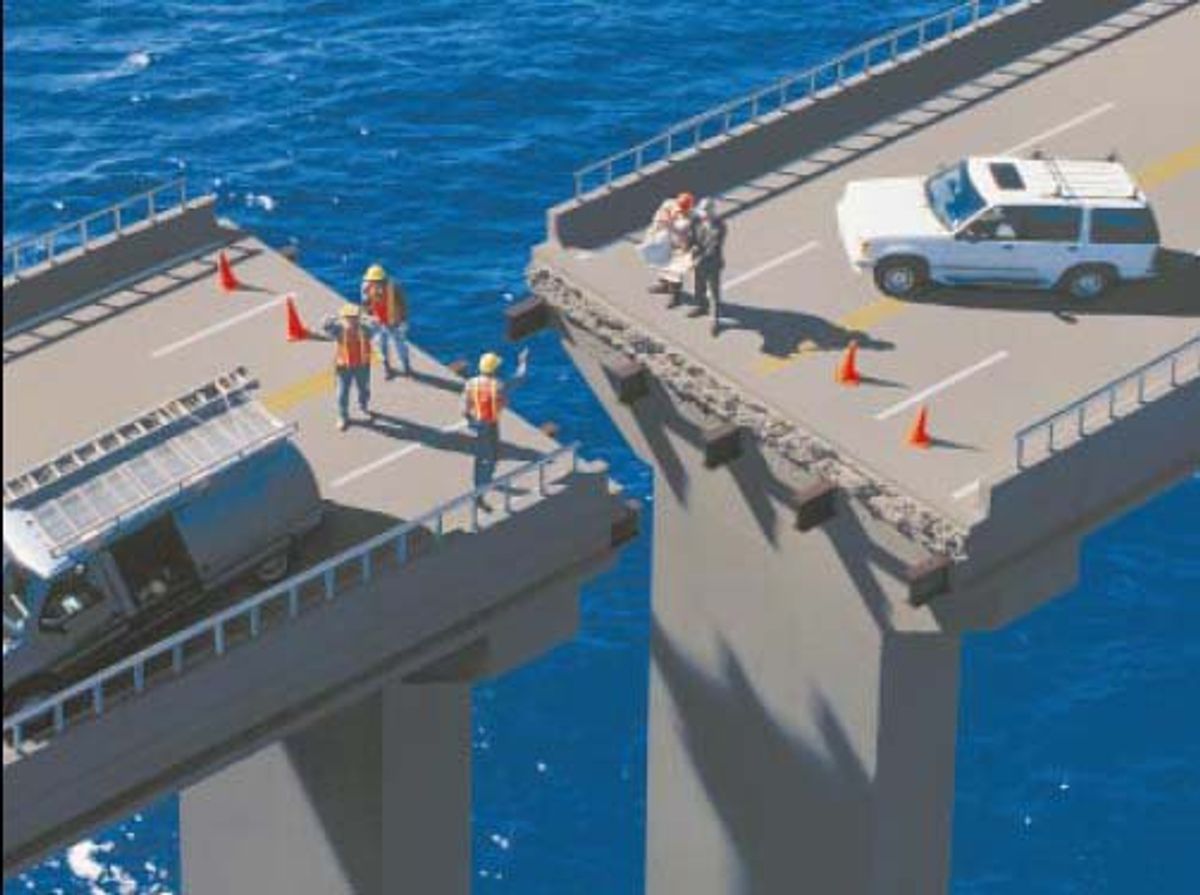 A photograph purportedly showing a misaligned bridge is frequently shared via blogs and social media as a picture of one of the "worst construction mistakes" of all-time:

What shall we call these, construction mistakes or errors or goof ups? What ever we call it, it won't change a thing and still these look hilarious. Its quite surprising to see these and we really wonder how the engineers and architects who were part of these constructions must have reacted seeing them.

When we first saw this bridge, we thought it to be shopped. But later we knew how wrong we were:

'Survey-scale inaccuracy or positioning errors can lead to costly construction mistakes such as bridge misalignment. Image courtesy of Zurich U.S.' While the above-quoted article correctly cited a caption that accompanied the image on the website of the National Oceanic and Atmospheric Administration (NOAA), that caption has been misinterpreted by some readers who believed it to document the occurrence of a misaligned bridge mishap. But Bobbi Simmons of NOAA's National Geodetic Survey explained that this image was actually an illustration created by the Zurich American Insurance Company and not a photograph of an actual bridge under construction:

The image of the broken bridge is an illustration, not a photograph. (A terrific illustration, at that!) We were given permission to use the illustration by the Zurich American Insurance Company. In past communication with a representative from Zurich American, they told us it was not necessary for NOAA to credit their company when using the image, however we prefer to do so as a courtesy, hence the reference.

We like the image, as it portrays extremely well the value of the work we do here at NOAA's National Geodetic Survey. We provide the framework for all positioning activities in the Nation — the foundational elements of latitude, longitude, elevation, and shoreline, and how they change over time.

The image of the broken bridge is one we like to use to signify how accurate positioning contributes to informed decision making and how it impacts a wide range of important activities including: surveying, city planning, mapping and charting, navigation, flood risk determination, transportation, land use, and ecosystem management. Our authoritative spatial data, models, and tools are vital for the protection and management of both man-made and natural resources, and support the economic prosperity and environmental health of the Nation.

This image has been online since at least 2007, when it was used by the NOAA in an article about the "Transcontinental Traverse" as part of the organization's 200th anniversary. NOAA explained that while angles can be accurately determined, measuring long distances occasionally leads to mistakes:

From the earliest days of the C&GS, angles have been relatively easy to accurately measure using instruments called theodolites. Distances, however, have been very difficult to measure accurately, especially over long lines. This difficulty led to scale inaccuracy, the chief weakness of the nationwide triangulation network. If the scale is off, the distance between two survey points will be too long or too short and area measurements also will be incorrect. Therefore, anything constructed from these survey points, such as a bridge or a railroad, may not meet or align properly.