Did a High School Principal Target a Pro-Gun Rights Student During a Protest for Gun Control?

New Prague High School in Minnesota says a pro-gun rights placard was removed from a protest because it violated policy, not for political reasons. 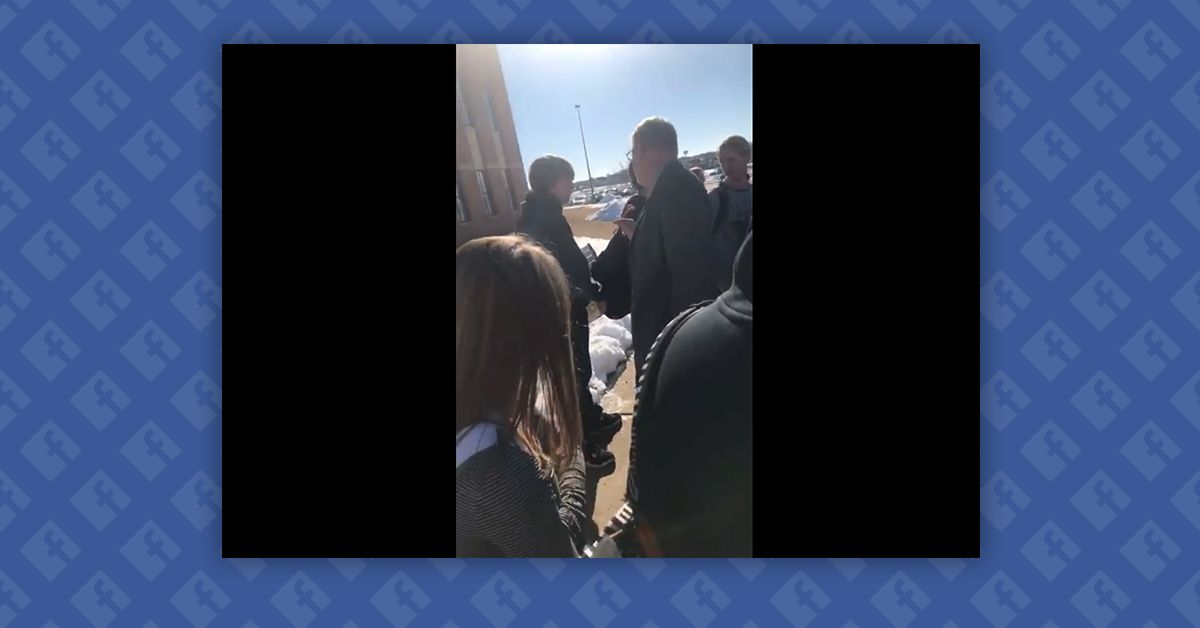 Claim:
A high school principal in Minnesota singled out a pro-gun rights student during a pro-gun control protest and escorted him off campus.
Rating:

A sign bearing a pro-gun rights message was removed from the campus of a Minnesota high school during a pro-gun control demonstration on 14 March 2018.

Whether the student who held the sign was escorted off school property.

The protest, in which young people demanding stricter gun control legislation left their classrooms en masse at 10 A.M. for seventeen minutes — one minute for each person killed during the 14 February 2018 mass shooting — attracted significant media attention, as well as scrutiny and criticism from those opposed to more aggressive gun control.

One video, shared widely on Facebook, appears to show a dispute between a teacher and a student at one high school. The person who posted the video, Kenny MacDonald, claims be a student of New Prague High School, 50 miles southwest of Minneapolis-St. Paul in Minnesota; he says the incident involved the principal of the school "escorting" a student off school property for apparently engaging in a counterprotest and holding a placard that read "Guns don't kill people, people kill people." The video was viewed more than 2 million times within a day:

The video appears to show a dispute between a young man holding a placard that reads "Guns don't kill people, people kill people" and an older man, apparently in a position of authority. The video does not show a student being removed from school property, nor does it show the older man threatening to call the police on the student.

In a statement on 15 March 2018, the New Prague Area Schools District site confirmed that there had been an incident involving a student holding a placard, but did not make it clear whether the older man in the video was, in fact, the principal of New Prague High School:

Yesterday approximately 100 of our high school students participated in a walkout, as did many of their peers across the country.  The walkout was conducted peacefully and without conflict.  Since then, attention has been focused on a sign that was present during the walkout.

The District has a policy that such items must be submitted to and reviewed by school administration at least 24-hours in advance.  In compliance with the District’s policy "... to protect the exercise of students' and employees' free speech rights, [while] taking into consideration the educational objectives and responsibilities of the School District," the sign was moved to non-school grounds. The District has an obligation to enforce this policy without regard to political viewpoint.

No student was disciplined and law enforcement was not involved with any of the students present during the walkout.

While the school district stated that the sign was "moved to non-school grounds," it did not specify whether the person holding the sign was also escorted or removed from school property. School authorities also noted that law enforcement did not become involved in the incident, but did not specify whether the older man shown in the video at any time threatened to call the police.

The New Prague Area School District does indeed have a policy which requires that any "non-school sponsored material" to be displayed on campus must be submitted to the principal for approval, 24 hours ahead of time. Section 6 of the district's Policy 505 states:

Any student or employee wishing to distribute (as defined in this policy) non-school sponsored material must first submit for approval a copy of the material to the principal at least 24 hours in advance of desired distribution time, together with the following information:

At one point in the video posted to Facebook, there is an exchange in which the older man appears to invoke "Policy 505," although the video is so truncated that the context is unclear.

There was an incident on the campus of New Prague High School in Minnesota, during the national walkout protest against gun violence on 14 March 2018, and a pro-gun rights sign was, according to school authorities, removed from the school's property.

However, it is not clear whether the school's principal escorted the student who held the sign off campus, nor whether the principal threatened to call the police on that student. So far, we have not seen any evidence to support those claims, other than the testimony of the person who posted the video to Facebook.

Finally, we have seen no evidence that the sign was targeted for removal specifically because it contained a pro-gun rights message. The New Prague School District has specifically stated that the sign was removed "without regard to political viewpoint," and because it was not submitted for approval in advance of the demonstration, which is a violation of school district policy.

We asked the school district for more details but have not yet heard back.