A viral meme shows a real moment of mental difficulty for one contestant on "Who Wants to Be a Millionaire?" 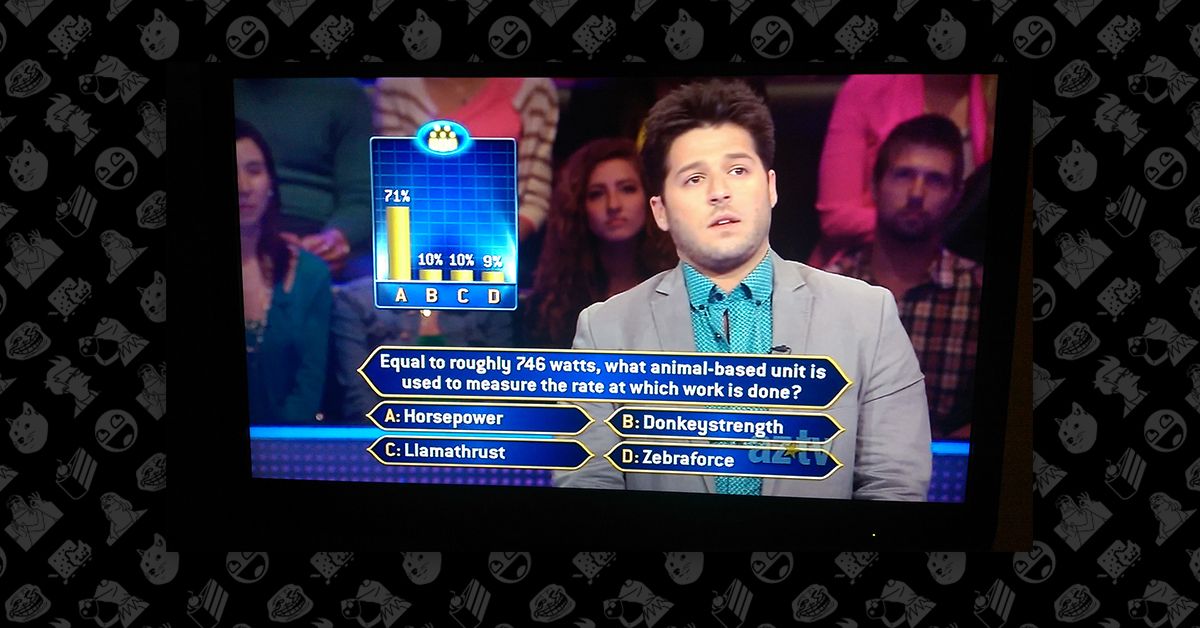 Claim:
A contestant on "Who Wants to Be a Millionaire" needed audience assistance in defining "horsepower," as opposed to "llamathrust" and "zebraforce."
Rating:

Game show schadenfreude has for many years been a favorite pastime of television viewers and Internet users. If you're not sure what we mean by that, search for "game show fails" on YouTube.

But our appetite for seeing other people make stupid mistakes while competing for massive amounts of money, combined with the advent of digital image editing, has also brought about hoaxes. In 2018, an old meme re-emerged on social media and left many internet users wondering about its authenticity. The image appears to show a contestant on Who Wants to Be a Millionaire? seeking the help of the audience in identifying a description of "horsepower," a question whose answer seemed obvious to many observers:

Equal to roughly 746 watts, what animal-based unit is used to measure the rate at which work is done?
A) Horsepower B) Donkeystrength C) Llamathrust D) Zebraforce

It would be unsurprising to learn that this image had been digitally edited or the audience poll superimposed for comic effect. However, this is in fact an authentic, undoctored photograph taken from a December 2014 episode of the popular, long-running quiz show. The moment first came to prominence in February 2015, when it was posted to the /funny/ section of the online forum Reddit: However, the question also stood out for several social media users who watched an episode broadcast on 1 December 2014. Their photographs — each of which are different from the others — corroborate the authenticity of the one featured in the meme.

C'mon Man - Who Wants To Be A Millionaire Edition. This guy asked the audience to find out if it was llamathrust. pic.twitter.com/Gi91svLdmE

In the end, the nervous contestant appears to have followed the sage advice of the audience and chosen "horsepower": On 1 December 2014, ABC first broadcast season 13, episode 76, but it's not clear whether these photographs were taken from that episode or from a syndicated rerun which happened to be shown on the same day. We have contacted the network for clarification, but did not receive a response in time for publication.

Television Game Shows who wants to be a millionaire
Read More