Fake news reports Miley Cyrus burned a Bible during a concert in order to promote tolerance. 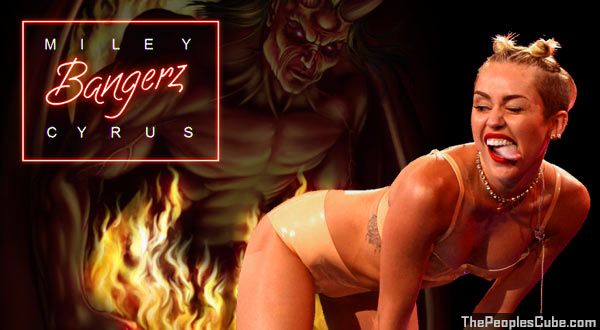 Claim:   Miley Cyrus burned a Bible during a concert in order to promote tolerance.

Origins:     On 14 June 2015, an article reporting that singer Miley Cyrus had set a Bible on fire during a recent concert in order "to promote tolerance" was widely circulated via social media:

Immediately following her interview, in which Miley Cyrus confessed to being "the least judgmental person in the world" and "understanding and accepting of everyone," she started her next show by setting a Bible on fire.

In an opening act for her recent concert at the Staples Center in Los Angeles, Cyrus walked out onto the stage and held the Bible out to the crowd saying, "Here is a tribute to all you Jesus-lovers out there." She then set the pages on fire and yelled "Hillary '16!" before dropping the book to the ground. As the music started, Cyrus began to sing while squatting over the burning Bible and performing a sexually provocative dance with repetitive thrusting hip movements, called 'twerking.'

After the concert, Cyrus told the journalists that her actions were meant to raise awareness and understanding of the downtrodden segments of our society. "Being a role model for millions of people, I know no better way to express the massive amount of love I have for the world, and if some crybabies are upset about it, they're idiots and I hope they die," Cyrus said before sticking out her tongue and suggestively spreading her legs for the cameras.

Many readers mistook this item for a genuine news report, but it was nothing more than spoof from a clickbait fake news web site known for spreading malware.