A photograph shows "Miracle Mike," a chicken that survived 18 months after his head was cut off.

This is a genuine photograph of Mike the Headless Chicken (aka Miracle Mike). While Miracle Mike truly survived after most of his head was cut off, it should be noted that part of Mike's brain was still intact.

For most people, the phrase “running around like a chicken with its head cut off” is a figurative expression to indicate that someone is acting in a chaotic fashion. But for 18 months in the 1940s, it could have been used literally to describe the headless chicken known as “Miracle Mike.” In July 2021, a photograph supposedly showing this headless wonder was circulated on social media: This is a genuine photograph of a living, albeit headless, chicken known as Miracle Mike.

Before this headless chicken was named Miracle Mike, and before it lost its head, this Wyandotte chicken was being prepped for dinner by Colorado farmer Lloyd Olsen. When Olsen’s axe came down, however, he struck the bird at an angle that left the jugular vein, an ear, and most of the chicken’s brain steam intact. This allowed the chicken to live despite the fact that the majority of its head had been chopped off.

Also known as Miracle Mike, Mike the Headless Chicken was a plump, five-year-old cockerel when he was unceremoniously beheaded on 10 September 1945. Farmer Lloyd Olsen of Fruita in Colorado did the deed because his wife Clara was having her mother over for dinner that night, and Olsen knew she’d always enjoyed a bit of roast chicken neck. With that in mind, Olsen tried to save most of Mike’s neck as he lopped his head off, but in doing so, he accidentally made his axe miss Mike’s jugular vein, plus one ear and most of his brain stem, and to his surprise, Mike didn’t die.

In fact, Mike stuck around for a good 18 months without his head.

Immediately after it happened, Mike reeled around like any headless chicken would, but soon settled down. He even started pecking at the ground for food with his newly minted stump, and made preening motions. His crows had become throaty gurglings. Olsen, bewildered, left him to it. The next morning, when Olsen found Mike asleep in the barn, having attempted to tuck his head under his wing as he always had, the farmer took it upon himself to figure out how to feed this unwitting monstrosity. Mike had earned that much.

In 2014, Dr. Wayne J. Kuenzel, a poultry physiologist and neurobiologist at the University of Arkansas, talked to Modern Farmer about how Mike was able to survive this ordeal. Kuenzel explained that vital functions, such as breathing, as well as motor functions, are controlled by the cerebellum and brain stem, which are both located at the bottom of the chicken’s brain. When Mike’s head was chopped up, these parts were still intact which allowed Mike to survive.

The skull of a chicken contains two massive openings for the eyes that allow the brain to be shoved upwards into the skull at an angle of around 45 degrees. This means that while some of the brain may be sliced away, a very important part remains.

“But because the brain is at that angle,” says Kuenzel, “you still have the functional part that’s so critical for survival intact.”

Slicing below the eyes is key, he says. Above the eyes removes only the forebrain. If the bird still has a bottom beak, the cerebellum and brain stem are likely still intact, which makes the chicken’s basic motor functions and ability to breathe quite likely. What this means is that, under very specific circumstances, you may end up with a lobotomized chicken on your hands. Alive, but missing quite a few parts of its brain.

Not only did Miracle Mike survive his beheading, but with the help of Olsen he lived for approximately 18 more months. According to a September 1945 article published in the Fort-Worth Star Telegram, Olsen successfully fed Mike the Headless chicken by dropping water, worms, and corn into the chicken’s exposed esophagus: 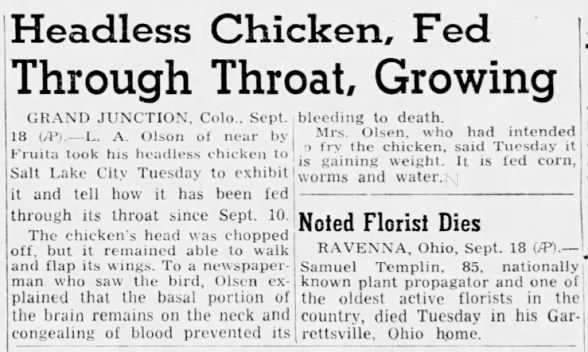 In 2015, the BBC talked to Olsen’s great grandson, Troy Waters, about this local legend. Waters’ version is slightly different than the story published in Scientific American. Instead of being prepped for dinner, Waters said that Mike was beheaded at the same time Olsen killed a few dozen other chickens that he was going to sell at the market. When he went to collect the chickens, however, he noticed that one was still strutting around.

On 10 September 1945 Lloyd Olsen and his wife Clara were killing chickens, on their farm in Fruita, Colorado. Olsen would decapitate the birds, his wife would clean them up. But one of the 40 or 50 animals that went under Olsen’s hatchet that day didn’t behave like the rest.

“They got down to the end and had one who was still alive, up and walking around,” says the couple’s great-grandson, Troy Waters, himself a farmer in Fruita. The chicken kicked and ran, and didn’t stop.

It was placed in an old apple box on the farm’s screened porch for the night, and when Lloyd Olsen woke the following morning, he stepped outside to see what had happened. “The damn thing was still alive,” says Waters… “He took the chicken carcasses to town to sell them at the meat market,” Waters says.

“He took this rooster with him – and back then he was still using the horse and wagon quite a bit. He threw it in the wagon, took the chicken in with him and started betting people beer or something that he had a live headless chicken.”

As it became clear that Miracle Mike was not going to succumb to something as trivial as not having a head, Olsen began to tour with the bird, showing him off at various curiosity attractions. Here’s a newspaper clipping from The Associated Press about an appearance Miracle Mike made in Salt Lake City, Utah, to “convince the skeptical that he was real.” According to the newspaper, Mike the Headless Chicken’s act consisted of some attempted preening, some gurgling noises, and the remains of his head being displayed in a little jar: 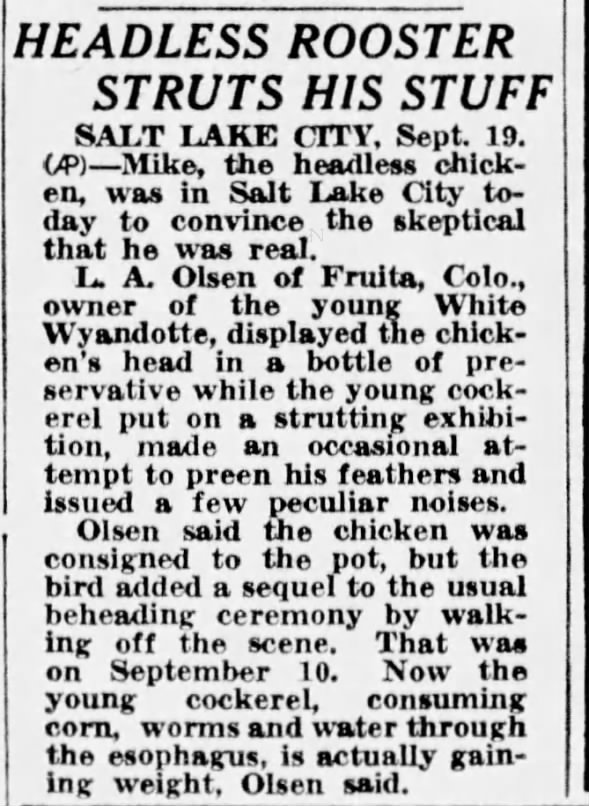 While Miracle Mike earned mentions in national publications such as Time magazine, not everyone was a fan. Some wrote letters to newspapers in which they criticized Olsen’s butchering skills and said that it was cruel to keep the bird alive. By February 1946, a booker for the Ringling Brothers lamented that the world had run out of “freaks,” as the best attractions people had to offer were headless chickens. Miracle Mike died in the spring of 1947, about 18 months after he lost his head, during a pit stop on his curiosity tour in Phoenix, Arizona. Waters told the BBC that while Mike could be fed by dropping water and small bits of food down his throat, Olsen occasionally had to use a syringe to clear the mucus. During their stop in Phoenix, Olsen realized that they had left the syringe behind and Miracle Mike suffocated:

Mike was fed with liquid food and water that the Olsens dropped directly into his oesophagus. Another vital bodily function they helped with was clearing mucus from his throat. They fed him with a dropper, and cleared his throat with a syringe.

The night Mike died, they were woken in their motel room by the sound of the bird choking. When they looked for the syringe they realised they had left it at the sideshow, and before they could find an alternative, Mike suffocated.

“For years he would claim he had sold [the chicken] to a guy in the sideshow circuit,” Waters says, before pausing. “It wasn’t until, well, a few years before he died that he finally admitted to me one night that it died on him. I think he didn’t ever want to admit he screwed up and let the proverbial goose that lays golden eggs die on him.”

It should be noted that while the name “Miracle Mike” may give the impression that this was the only chicken to survive a botched beheading, we found several examples of other headless foul during our research. For example, a headless chicken lived for three months in Morenci, Arizona in 1947. The following clip shows another headless rooster who lived a “normal life” in Wichita, Kansas: 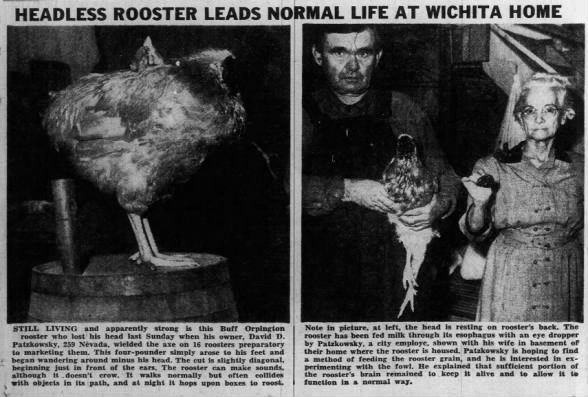