A quote attributed to the Vice President of the United States claims that churches heal more people than doctors. 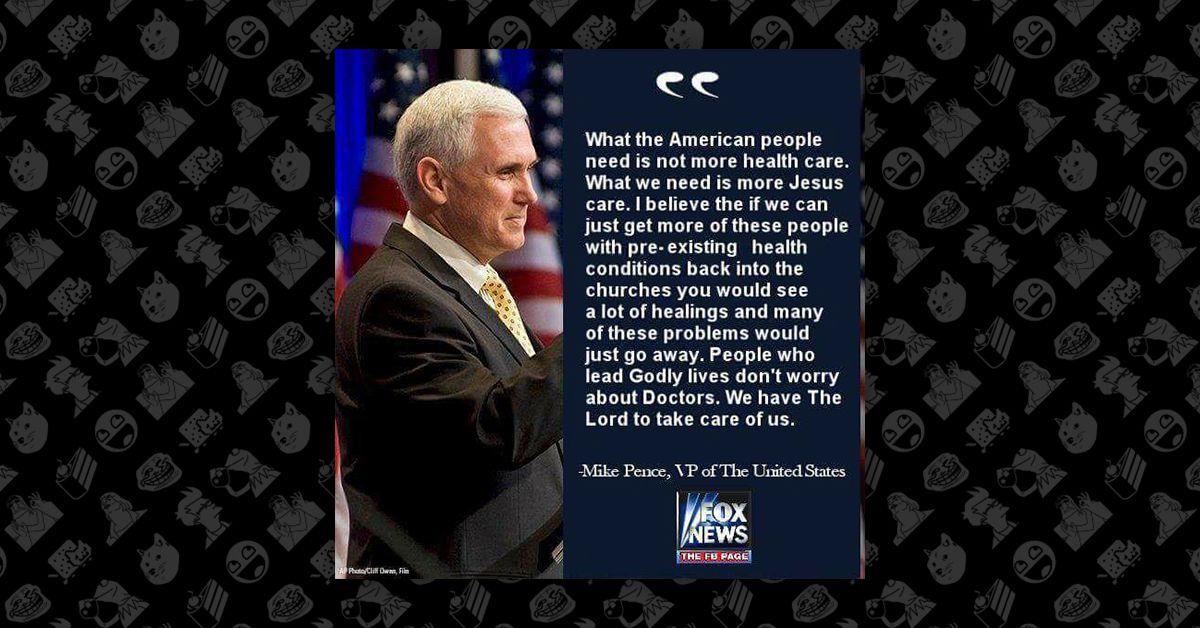 In early May 2017, an image macro went viral via social media bearing a pronouncement on health care attributed to U.S. Vice President Mike Pence, who supposedly said (grammatical anomalies in the original):

What the American people need is not more health care. What we need is more Jesus care. I believe the if we can just get more of these people with pre-existing health conditions back to churches you would see a lot of healings and many of these problems would just go away. People who lead Godly lives don't worry about Doctors. We have The Lord to take care of us.

The statement had currency because efforts by Republicans in the U.S. House of Representatives to pass a bill (popularly known as "Trumpcare") repealing and replacing the Affordable Care Act of 2010 (popularly known as "Obamacare") were, at the time, reaching a fever pitch. The statement also echoed remarks made by a prominent backer of Trumpcare, Rep. Mo Brooks (R-Alabama), who had gone on record as saying that "people who lead good lives" are healthier and less prone than others to have pre-existing health conditions. And it tapped into a popular conception of Mike Pence as someone who is overly pious and preachy.

The quote was entirely fabricated, however. We found no public record of Pence's ever saying such a thing. Despite the inclusion of what appears at first glance to be a Fox News logo on the image macro, Fox News wasn't connected in any way with its circulation.

The item first appeared on the Facebook page Fox News The Facebook Page, which is dedicated to lampooning Fox News and conservative politics in general: While it's true that Pence was instrumental in crafting a version of the health care legislation allowing states to waive certain provisions such as barring insurers from raising rates on people with pre-existing conditions, he has not suggested that people with such conditions would be better off going to church.