OANN: "The statements and claims expressed in this program are presented at this time as opinions only and are not intended to be taken or interpreted by the viewer as established facts." 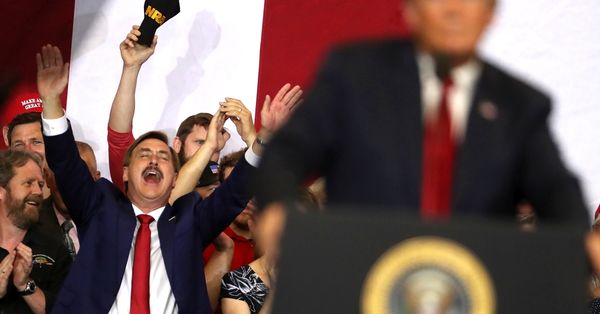 Claim:
OANN published a lengthy disclaimer before the start of My Pillow CEO Mike Lindell's election fraud conspiracy theory video "Absolute Proof," stating that the claims expressed within should be taken as opinions, not facts.
Rating:

On Feb. 5, 2021, the One America News Network (OANN) aired a "documentary" produced by MyPillow CEO Mike Lindell that promised to deliver "Absolute Proof" (hence the title of the film) that the 2020 election had been stolen from former U.S. President Donald Trump via various manners of election fraud. While Lindell promised to deliver "proof" of his claims, OANN ran a lengthy disclaimer before the video explicitly saying that the claims made in the movie did not represent the network's own reporting, and that all of the statements made within should not be "interpreted by the viewer as established facts."

This disclaimer truly aired before the start of "Absolute Proof" on OANN. Here's the text of the disclaimer in full:

Michael James Lindell purchased the airtime for the broadcast of this program on One American News (OAN) network.

Mr. Lindell is the sole author and executive producer of this program and is solely and exclusively responsible for its content.

The topic of this broadcast is the 2020 election. OAN has undertaken its own reporting on this topic.

This program is not the product of OAN's reporting.

The views, opinions and claims expressed in this program by Mr Lindell and other guests, presenters, producers or advertisers are theirs and theirs alone and are not adopted or endorsed by OAN or its owners.

In particular, OAN does not adopt or endorse any statements or opinions in this program regarding the following entities or people: US Dominion Inc. (and any related entities); Smartmatic USA Corp.; Brian Kemp; Brad Raffensperger; or Gabriel Sterling.

Further the statements and claims expressed in this program are presented of this time as opinions only and are not intended to be taken or interpreted by the viewer as established facts.

The results in the 2020 Presidential election remain disputed and questioned by millions of Americans who are entitled to hear from all sides in order to help determine what may have happened.

OANN likely ran this disclaimer for two reasons: First, in the days following the 2020 presidential election, Smartmatic and Dominion Voting Systems filed lawsuits against various people and news networks for falsely reporting that their companies were involved with voter fraud.

Tom Clare, a lawyer for Dominion, told Mother Jones that this disclaimer would not spare the network from a lawsuit:

“Nice try” by OAN, but it definitely does not relieve them of liability. To the contrary, we warned them specifically and in writing that they would be broadcasting false and defamatory statements of fact if they broadcast the program, and they made the affirmative decision to disregarded that warning and broadcast it anyway. Other outlets have refused to host it. Textbook actual malice.

The other reason OANN may have added this disclaimer is because Lindell's "Absolute Proof" video is replete with widely discredited claims about voter fraud and should not, as stated in the disclaimer, be interpreted as established fact.

"Absolute Proof" rehashes a number of debunked rumors. Here are some of the facts:

There simply is no evidence of widespread voter fraud in the 2020 election. Or, as Trump's Attorney General William Barr said: "We have not seen fraud on a scale that could have effected a different outcome in the election.”

While OANN truly ran a disclaimer ahead of "Absolute Proof" stating that Lindell's movie contained opinions, not facts, it should be noted that OANN did not use this cautionary tone while promoting this video. In one tweet, OANN wrote:

Growing evidence of election fraud reveals that the presidency of the United States has been stolen from the American people. Join MyPillow CEO Mike Lindell for an exclusive report. Tune in to "Absolute Proof" this Saturday & Sunday starting at 8 AM ET / 5 AM PT. Only on #OANN.

That tweet would later be tagged with a disclaimer from Twitter, stating: "This claim of election fraud is disputed, and this Tweet can’t be replied to, Retweeted, or liked due to a risk of violence."