Did Rep. Mike Kennedy Say 'Access to Hospitals' Was Responsible for Deaths?

According to rumors, the Utah Republican says access to hospitals killed a million or more Americans a year — but is that true? 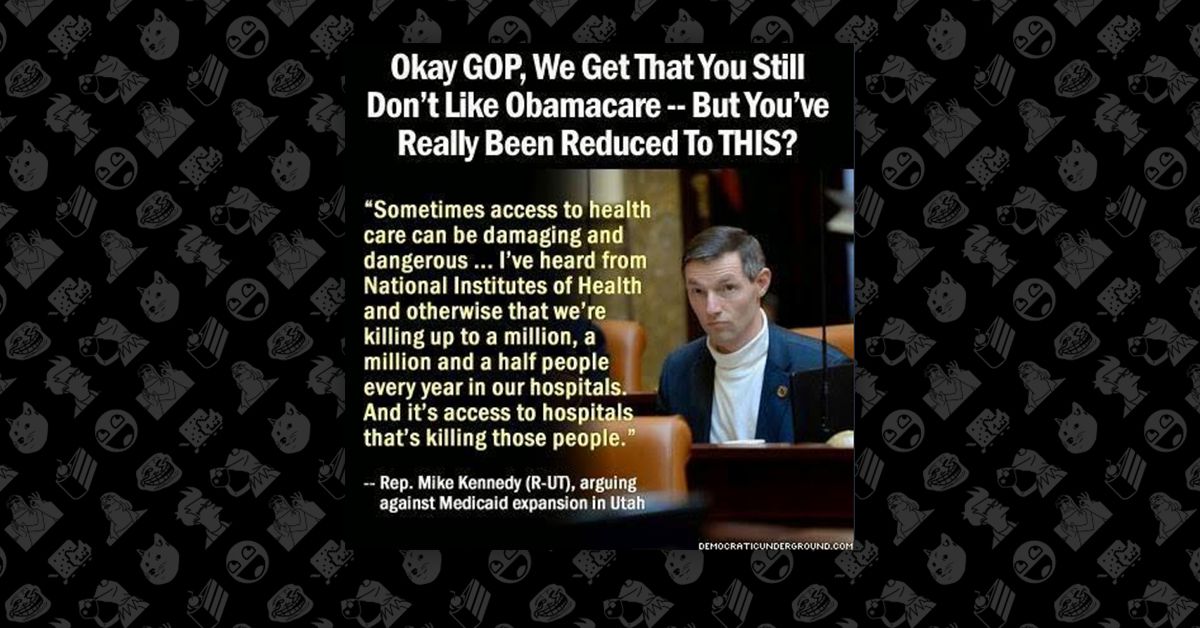 Rep. Mike Kennedy said "I’ve heard from National Institutes of Health and otherwise that we’re killing up to a million, a million and a half people every year in our hospitals."

We could not find a source supporting the claim that 1M to 1.5M people are "killed" every year in hospitals.

In April 2018 Utah Republican Mike Kennedy made national headlines as he faced off against Mitt Romney for a Senate seat in that state, prompting the circulation of a meme asserting that the Kennedy had once made a statement about access to hospitals and patient deaths: Although the meme dated to at least 2015, its featured quote appeared in a 24 April 2018 Salt Lake Tribune article: "Who is that guy who beat Mitt Romney at the GOP convention?" which reported that:

At the top of the list is to “repeal Obamacare.” [Kennedy] told delegates, “I oppose Obamacare and any scheme that puts the government between doctor and patient.”

Four years ago, Kennedy made national headlines when, during a legislative task force meeting, he said, “Sometimes access to health care can be damaging and dangerous ... I’ve heard from National Institutes of Health and otherwise that we’re killing up to a million, a million and a half people every year in our hospitals. And it’s access to hospitals that’s killing those people.”

That piece referenced a report and video from Salt Lake station KSTU, but neither source provided complete context. Kennedy was quoted as arguing against Medicaid expansion, and as represented, his remarks were accurately transcribed:

Representative Mike Kennedy, a Republican from Alpine, made the comments in a Health Reform Task Force meeting, in reaction to a story from another doctor.

Doctor Kyle Jones told the legislature's Health Reform Task Force about a neighbor who was in a car crash. That neighbor suffered a rare response to pain medicine called toxic encephalopathy. The condition has caused memory loss, seizures and depression, according to Jones.

The Republican from Alpine repeated the argument more than once: "Sometimes access to health care can be damaging and dangerous. And it's a perspective for the [Legislative] body to consider is that, I've heard from National Institutes of Health and otherwise that we're killing up to a million, a million and a half people every year in our hospitals. And it's access to hospitals that's killing those people."

We were unable to locate any information substantiating Kennedy's claim that access to hospitals killed between one and one-and-a-half million Americans per year. It's possible Kennedy was referencing an ongoing study of the effects of medical mistakes, a topic that was the subject of research published in The BMJ in May 2016, but those figures estimated only 250,000 deaths due to medical error per year at that time.

Kennedy may also have been referencing research published in September 2013, in which researchers extrapolated between 210,000 and 400,000 deaths per year "associated with preventable harm in hospitals." Authors of that study concluded that "engaging patients and their advocates during hospital care, systematically seeking the patients’ voice in identifying harms, transparent accountability for harm, and intentional correction of root causes of harm will be necessary" to reduce preventable hospital deaths but did not recommend restricting access to medical care as a preventive measure.