Are Michigan Lawmakers Considering a Bill To Microchip Residents?

New technology tends to be scary for some, but new legislation about new technology? It's not for the faint of heart. 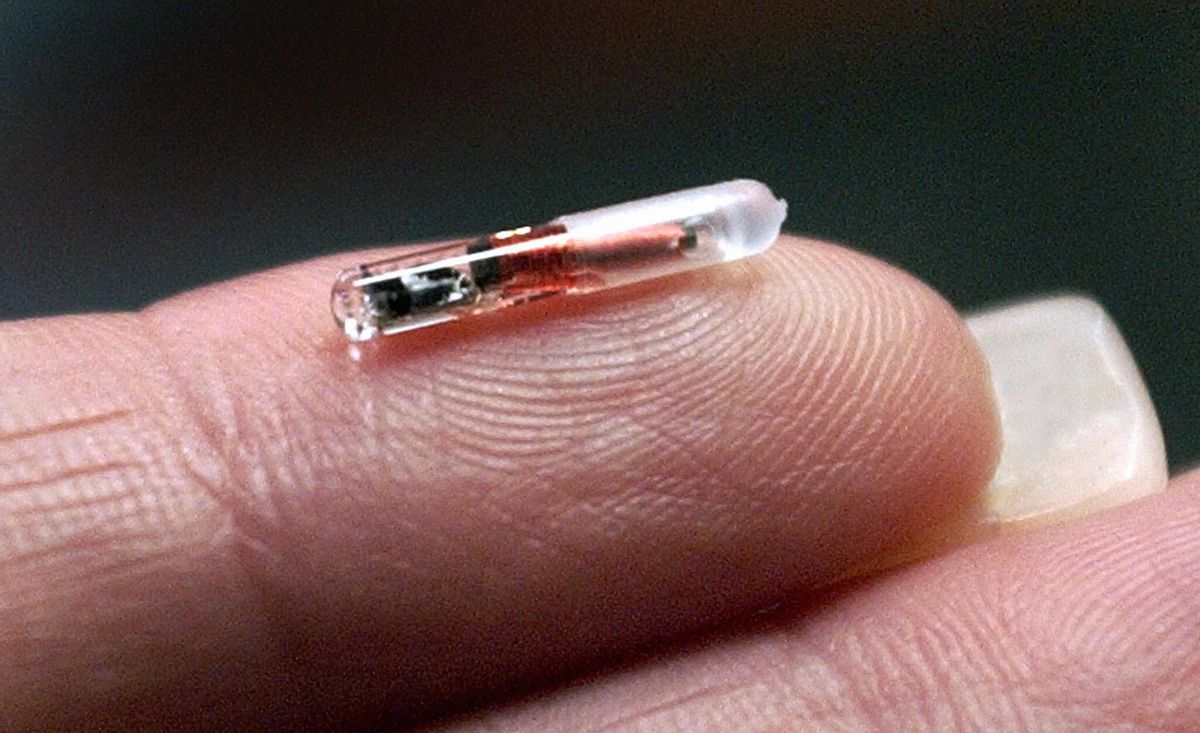 Claim:
In June 2020, the Michigan House of Representatives passed legislation that would allow employers to microchip workers on a voluntary basis.
Rating:

On June 24, 2020, the Michigan House of Representatives passed a bill that would prohibit employers from making microchip implants mandatory for employees and establish protections for workers who choose not to use the technology.

The proposal does not establish a new system to permit or encourage the use of such devices — Michigan businesses could already offer microchips to workers on a voluntary basis under existing law. Rather, the legislation would establish new regulations for the technology.

On June 24, 2020, the Michigan House of Representatives approved the "Microchip Protection Act" — a three-page piece of legislation that establishes guidelines for how businesses can use microchips implanted under people's skin in their workflows.

Some onlookers interpreted the vote as lawmakers' endorsement of the use of tiny implant devices on humans — a relatively rare practice in the U.S. — and alleged online that the bill was part of some nefarious scheme by the Michigan government against citizens. Introduced by Republican State Rep. Bronna Kahle, the proposal was pending final approval from the state Senate and Gov. Gretchen Whitmer as of this writing. In the weeks that followed the House's decision, the website Great Game India (which was a major player in spreading misinformation about the origins of the coronavirus that causes COVID-19 and falsely claimed billionaire Bill Gates and the ID2020 Coalition was behind a grand surveillance plan to microchip the global population) published on July 4, 2020, for example:

The Michigan House of Representatives has passed a controversial bill to microchip humans voluntarily in the state under the guise of protecting their privacy. The Microchip Protection Act would allow Michigan employers to use microchipping of their workers with their consent. However, research has shown that [radio frequency identification] RFID transponders causes cancer.

Adding to that unsubstantiated concern regarding citizens' health, a viral web page by a Michigan-based blogger alleged that the legislation posed a threat to citizens' privacy and civil rights. He wrote:

The bill verbage [sic] blocks employers from requiring microchips, but also creates a legitimacy for employers considering using the technology in the first place... If everyone is walking around with a unique identifier, privacy is out the window. ...This means anyone could track you. Stores could track your entry and exit, showing you targeted ads. Thieves could be signaled when you leave your home. Your movements and contacts could be used against you in any number of ways, including identity theft. Numerous readers reached out to Snopes in July 2020 to investigate the legitimacy of the social media and blog posts regarding the Michigan proposal. And upon our analysis of the postings, we deemed the underlying assertion to be this: The Michigan House passed legislation that would allow employers to microchip workers on a voluntary basis.

To fully explore that claim, here's important context: Only a few U.S.-based companies had publicized the use of radio-frequency identification tags (RFID), or microchips, in their workplace at the time of the Michigan House's vote, and none of them were believed to be in the state, according to Kahle. The technology trend among U.S businesses seemed to have emerged after Sweden office complex Epicenter began offering RFID microchip implants to employees in 2015 (we explain more below).

So to recap the facts, yes, the Michigan House approved a bill governing the use of microchips with a landslide vote, 104-2 (see the bill's legislative actions here), affirming the former aspect of the above-mentioned claim. Less simple, however, is the explanation for what the measure aimed to accomplish.

To unpack that part of critics' assertion, we reviewed the specifics of the Microchip Protection Act, House Bill No. 5672, which can be read in a PDF format here. The bill comprises five sections, as well as an introduction that describes the act's purpose as this:

In other words, the legislation would give workers or potential hires the legal grounds to sue bosses who make human microchips of any kind mandatory for employment. The bill would also establish protections for workers who do not want to use the technology and feel that their employers treated them differently compared to their pro-microchip coworkers.

The first two sections of the bill define terms under which those provisions apply: any situation when technology is implanted, injected, inhaled "or otherwise incorporat[ed] ... into the employee's or prospective employee's body." Then, in the third provision, the legislation includes the following language:

That would mean if a judge for whatever reason ruled that a Michigan citizen must use a microchip (the technology could serve as a tool for probation or parole officials to track someone who is serving a criminal sentence, for instance) an employer of that individual could require him/her/them to use the device at work. The fourth section of the bill goes on to explain under what circumstances those affected employees or the court system could seek damages when or if employers violate the exception to the measure prohibiting mandatory microchipping.

In reference to the above-mentioned claim, however, the final part of the legislation is key: "This act does not limit an employee's or prospective employee's rights or remedies under any other state or federal law," which include laws protecting the privacy and confidentiality of citizens. Any notion that the measure would establish a legal framework for Michigan employers to microchip people against their will is completely false.

And here's the fundamental misconception among people who raised concerns over the Michigan proposal: Even without the legislation, anyone in the state can already voluntarily implant themselves with the device or offer the technology to employees.

Wisconsin company Three Square Market, which specializes in vending machines and self-service software for offices, was the first widely known U.S. company to offer the devices to workers, in July 2017. There, employees can voluntarily get the devices implanted into their hands or use a wristband with the same RFID microchip to make purchases in the company's break room and use office equipment, among other things. The microchips use the same near-field communication technology utilized by contactless payment systems such as Apple Pay.

In early 2020, Ifeoma Ajunwa, a Cornell University labor and employment law professor who studies the use of workplace technology, told MarketWatch there are likely more American businesses that use the technology, "but they are probably not advertising it."

So as the technology becomes more prevalent, states are enacting new laws to regulate it. As of early 2020, more than a dozen states were either considering legislation like the Michigan bill that pertains specifically to workers' rights or were mulling more broad rules to govern the technology, or they had already passed such laws, according to analysis of state statutes on microchipping by the National Conference of State Legislatures and LexisNexis, a database of legal research.

Among that minority group of U.S. states was Indiana, for instance, which established a law that took effect July 1, 2020. “Microchipping is on the rise, and Hoosiers need to be aware of their rights,” said the legislation's author, Republican Rep. Alan Morrison, before the bill had passed. “It is crucial to take the necessary steps now to ensure more safety and privacy in the future.”

Similarly, Kahle, the sponsor of the Michigan proposal, said even though the practice was relatively rare as of mid-2020, she was attempting to prepare her state for a future when and if the technology is more popular. She said in a June 24, 2020, statement:

With the way technology has increased over the years and as it continues to grow, it’s important Michigan job providers balance the interests of the company with their employees’ expectations of privacy. ...Microchipping has been brought up in many conversations as companies across the country are exploring cost-effective ways to increase workplace efficiency. ...

Despite this type of technology not quite making its way into our state yet, I wouldn’t be surprised if it becomes a standard business practice statewide within the next few years. ...We should absolutely take every step possible to get ahead of these devices.

In sum, while it was true that the Michigan House approved legislation governing the use of microchips, it was false to claim that the bill itself would allow employers to inject the devices — that practice was not prohibited by existing law and the in-question legislation would not suddenly permit it. Rather, the Microchip Protection Act established protections for employees who do not want to use the technology at work. For those reasons, we rate the claim "Mostly False."

Keshner, Andrew.   "States Are Cracking Down on Companies Microchipping Their Employees -- How Common Is It?"    MarketWatch.   4 February 2020.