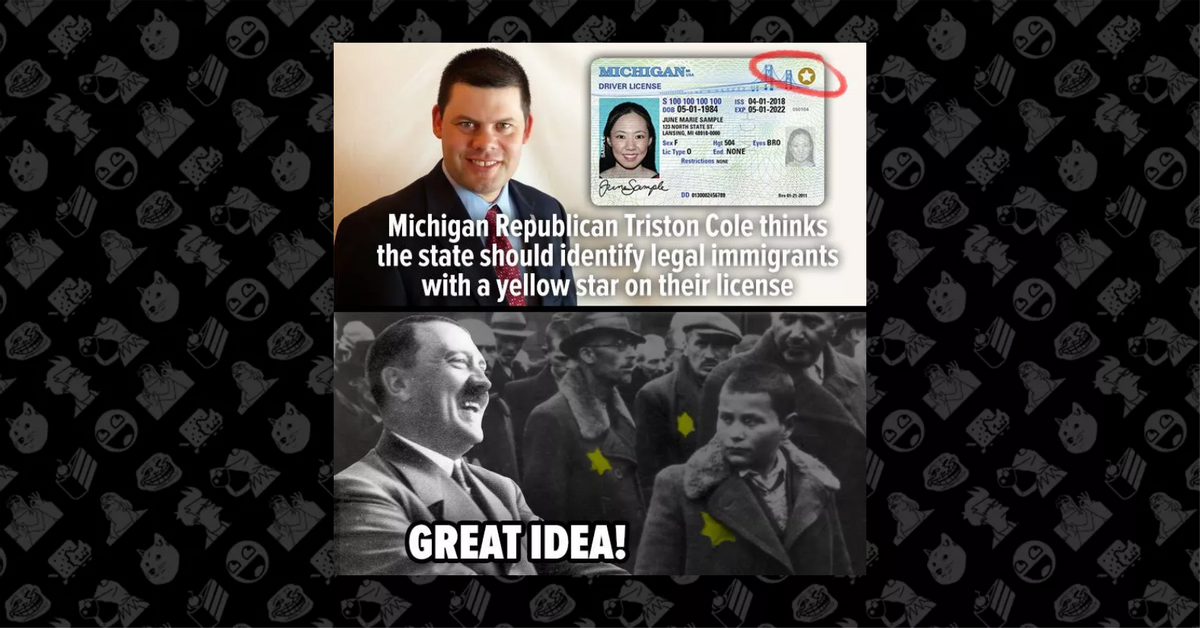 Temporary immigrants' licenses have been marked with "LT" (limited term) since 2013 in Michigan, and some licenses feature a gold or yellow star to indicate compliance with the REAL ID Act of 2005.

On 19 April 2018, Occupy Democrats was among Facebook pages and web sites sharing a meme which claimed that a Republican lawmaker in Michigan, Rep. Triston Cole, had introduced a bill proposing that immigrants' drivers' licenses be marked with a yellow star:

The memes did not typically include any information substantiating the claim that Rep. Triston Cole (R- but a blog post published on 16 April 2018 said:

Michigan Republicans tried to pass a bill that would add a symbol, one option being A YELLOW STAR to LEGAL immigrants' driver's licenses. Not even a red star. A freaking yellow star, you know LIKE HITLER DID TO JEWS, only this one was a five point star so that’s okay...or something. Kind of perfect considering a new study showing two-thirds of millennials and 4 in 10 Americans don’t even know what Auschwitz is. One-third of Americans think fewer than six million Jews were killed in the Holocaust, and over half of Americans think Hitler took power by force when he was actually democratically elected.

So, the Michigan Republicans, another democratically elected group, just tried to put yellow stars on immigrants. Was it utter ignorance of history, has a Neo-Nazi troll managed to gain a position of power, or has everyone simply lost their goddamn freaking minds?

A 10 April 2018 Detroit Free Press article was linked at the end of the post. It did not mention using a star on the license at any point, but an attached image included a sample Michigan license featuring a star: That article reported on bills proposing a "visual marker" on temporary immigrants" licenses, and quoted Cole as saying that there will not be any such requirement:

The driver's licenses for temporary immigrants will continue to have a "LT" on them to indicate they are "limited term." But there won't be any other visual marker or potentially misleading information about immigration status, said [Susan Reed, Managing Attorney for the Michigan Immigrants Rights Center.]

State Rep. Triston Cole, chair of the transportation committee that approved of the bills, said the changes will help both immigrants and law enforcement. "There won't be any" visual marker requirements now as had been mentioned in the original bill, he said.

"This really streamlines the process and makes it easier for everyone," Cole said.

Speaking at the hearing [] before the vote to approve, Cole said: "I really want to thank those that helped to ensure that the verbiage was correct as we made these changes."

The main goal of the bills was to comply with the REAL ID act, he said. Passed by Congress in 2005, the REAL ID Act "established minimum security standards for state-issued driver's licenses and identification cards," says the Department of Homeland Security's website.

An article published on the same day by the same outlet noted that the use of "LT" on licenses began in 2013. As for the yellow star mentioned in the meme, that confusion seemed to stem from unrelated provisions under the 2005 REAL ID Act. In September 2014, the Boston Globe reported:

Under the Department of Homeland Security’s enforcement schedule, the agency will soon require a REAL ID-compliant card to enter most federal buildings. As of 2016, Massachusetts licenses won’t be usable at the airport.

As presented, the memes and blog post are mostly false. Although lawmakers in Michigan did propose a "visual marker" on the licenses of temporary immigrants, Cole most recently said there will not be any such designation on licenses. The bills mentioned in the meme were aimed at REAL ID Act compliance, and the yellow star is unrelated to immigration status. Under provisions of the 2005 legislation, the marking is in fact used to signal compliance with a Department of Homeland Security program.