A viral Facebook post about surplus U.S. cherry crops destroyed to "make room for imports" appeals to locavores but contains some inaccuracies. 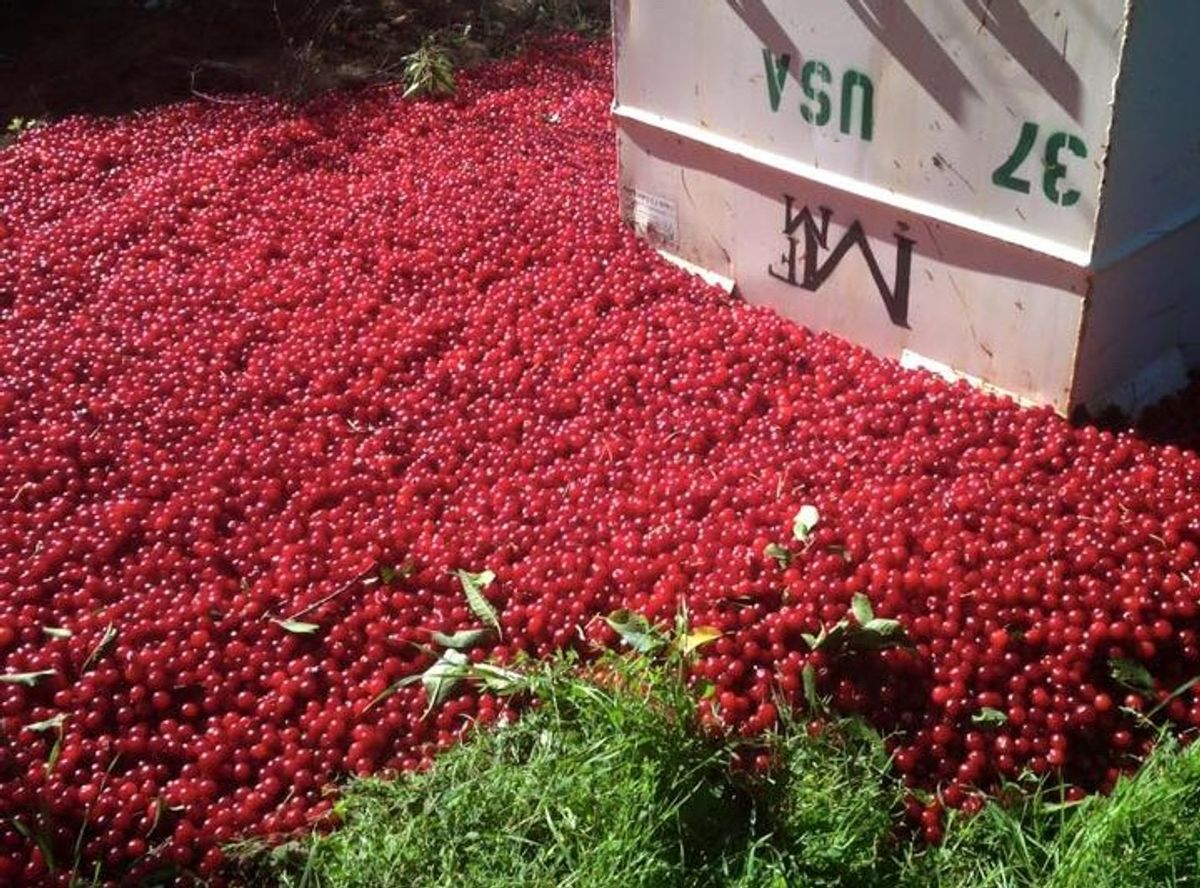 Claim:
A Michigan farmer was forced to destroy 40,000 edible cherries to make way for cherries imported from outside the U.S.
Rating:

Michigan cherry farmer Marc Santucci destroyed 14 percent of his 2016 crop due to cherry industry limits on the supply of marketable cherries.

Cherry farmers requested they be covered by a USDA marketing order (it was not imposed on them), the order was implemented to stabilize the volatile cherry market (not to "protect imports"), and farmers are not required to destroy surplus cherries.

On 26 July 2016, Michigan cherry farmer Marc Santucci shared a post on Facebook asserting that he was forced to destroy 14 percent of his tart cherry crop in order to protect the market for cherries imported from overseas:

These cherries are beautiful! But, we have to dump 14% of our tart cherry crop on the ground to rot. Why? So we can allow the import of 200 million pounds of cherries from overseas! It just doesn't seem right. What do you think? Please share this on your Facebook page???. Just to let everyone know we are not allowed to donate or in any way use diverted cherries. I have people who would buy them if I could sell them. Also these are tart cherries with a very short shelf life Santucci's post slowly circulated on the social network, attracting the attention of blogs and health-conscious social media users through September 2016. As presented, Santucci's tale sounded like an unbelievable level of bureaucratic interference with the farm industry and left readers wondering whether his report about having to destroy 40,000 pounds of edible cherries in order to "make room" for imported cherries (and was "not allowed to donate or in any way use diverted cherries") was accurate.

Online articles pinned blame for the cherry-chucking on the United States Department of Agriculture (USDA), citing a 29 July 2016 Detroit Free Press article about the social media controversy that referenced the federal Agricultural Agreement Act of 1937. The Detroit Free Press article only briefly mentioned the USDA as a starting point for a very complex cherry charter, noting that cherries were originally not regulated under the Agricultural Agreement Act, but the cherry industry opted into its provisions in 1995.

The act in question was introduced in 1937 due to tumultuous agricultural conditions that exacerbated the Great Depression and aimed to facilitate "orderly marketing conditions for agricultural commodities in interstate commerce" for the express purpose of stabilizing farmers' income. Cherry industry experts stressed that the 1995 extension of the regulation to include the tart cherry market was voluntary and had been desired by many cherry farmers:

At issue is a marketing order imposed through the U.S. Department of Agriculture as part of the federal Agricultural Agreement Act of 1937. But that law only applies to the tart cherry industry because growers and processors opted into the order in 1995.

"It was created at the industry's behest. It was voted in by growers and processors. It's not an imposition from outside," said Perry Hedin, executive director of the DeWitt-based Cherry Industry Administrative Board [CIAB], which oversees the marketing order not only in Michigan but in all states across the country that produce commercial crops of red tart cherries, including New York, Oregon, Pennsylvania, Utah, Washington and Wisconsin.

Tart cherries are one of the most volatile crops grown in the U.S., with yields that can vary dramatically year to year, Hedin said.

"This whole concept of the marketing order has two goals: to inject a better stability into our markets and improve grower returns," he said. "The growers have been paid far better prices under the marketing order over the past 20 years than they were before the order was in place."

A 29 July 2016 editorial published in the Michigan Farm News also addressed what it framed as multiple misrepresentations in Santucci's viral post, starting with the reason cherry crops were thusly regulated. A horticulture specialist noted that the cherry farmers themselves (not the USDA) had sought market regulation after experiencing damaging price fluctuations:

In a classic example of what happens on social media when people form opinions based on emotion instead of fact, a Northwestern Michigan tart cherry grower's Facebook posting has gone viral, but with faulty information to back up the posting's claims ... The problem, however, said Kevin Robson, horticulture specialist with Michigan Farm Bureau, is that the information posted shows either shallow understanding of the federal marketing order or a deliberate attempt to change the order because of political disagreement.

"It's also enforced by the growers themselves," he said. "It is for the betterment of the industry as a whole, and a great number of cherry growers have benefited, even those who voted against it."

Administered by the Cherry Industry Administrative Board (CIAB), the order this year required tart cherry processors to keep 29 percent (the farmer's posting said he was ordered to dump only 14 percent) of the crop they handle off traditional markets (pies, sweetened desserts, etc.) in an attempt to stabilize both prices and supply, which in cherries has been notoriously volatile.

"For example," Reposing said, "in 1988, when the entity was called the Cherry Administrative Board, growers voted to eliminate the marketing order. Prices began to follow a rollercoaster that led, within 10 years, to tart cherry prices that fell into single figures. Some growers went out of business."

In response to prices that were below costs of production, tart cherry growers in seven states petitioned the USDA to put a new order and administrative board in place, and prices began to stabilize. Still, some growers, such as the one who posted the photo of a small pile of cherries, took exception to the order.

Generally, the Agricultural Agreement Act ensures relatively stable income for tart cherry farmers in the face of a volatile market, with one of the drawbacks of that stability being that in boom crop years (as 2016 was), farmers may end up with a good deal of product they are precluded from selling on the open market. However, although some outlets claim CIAB heavies visited farms to ensure every cherry lies unchomped, tart cherry farmers have options beyond leaving their surplus crop to "rot in the sun":

Processors' options in times of surplus include holding the restricted cherries in surplus — frozen, dried or concentrated — for a later slow year. Farmers also can attempt to sell the surplus cherries in overseas markets or sell them domestically in a newly created market, either as a new product or by convincing a supermarket chain or other end user currently supplied by imported cherries to switch to U.S.-grown, he said.

Hedin said Santucci could have worked with the [Cherry Industry Administrative] board to find a place to donate the surplus cherries, which typically aren't eaten raw like sweet cherries because of their very short shelf-life, but are instead used in products such as pie filling and jams.

Another misstatement on the Facebook posting, [horticulture specialist Kevin] Robson said, is that growers are not allowed to donate or use the dumped cherries "in any way."

"That's just not true," Robson said. "Farmers can use the cherries for research and development, and they could make thousands of cherry pies and donate them to charity if they want. Remember these are tart cherries. They need to be processed — and quickly — to make a viable product. They aren't sweets that you just eat by the handful."

The Facebook posting wrongly puts the blame for cherry dumping on the marketing order, Robson said, when it is the processor who makes the decision to ask farmers to dump cherries.

Santucci himself told Grand Rapids television station WXMI that the dumping of surplus cherries wasn't expressly mandatory, but their short shelf life makes it difficult to find alternative uses for them:

"I was just notified when we started shaking the trees that 14 percent would have to be kept off the market, so it didn't give me time to find any alternative action," he said, adding that tart cherries only have a two-day shelf life.

It was true that Santucci's 2016 crop was (as with that of all other cherry growers) subject to a growers' agreement barring surplus cherries from the marketplace, and Santucci asserted he had insufficient time to properly divert his surplus cherries to other uses or markets. But the agreement under which the tart cherry market is regulated doesn't mandate surplus cherries be destroyed, nor does the protocol exist to protect foreign imports. Cherry growers in several states voluntarily opted in to a USDA marketing agreement (rather than being forcibly regulated) following a period of instability in the cherry industry, and agriculture experts widely agree the provision provides more protection than harm to cherry growers.