Is This a Monument to Michelle Obama’s Former Slave Ancestor? 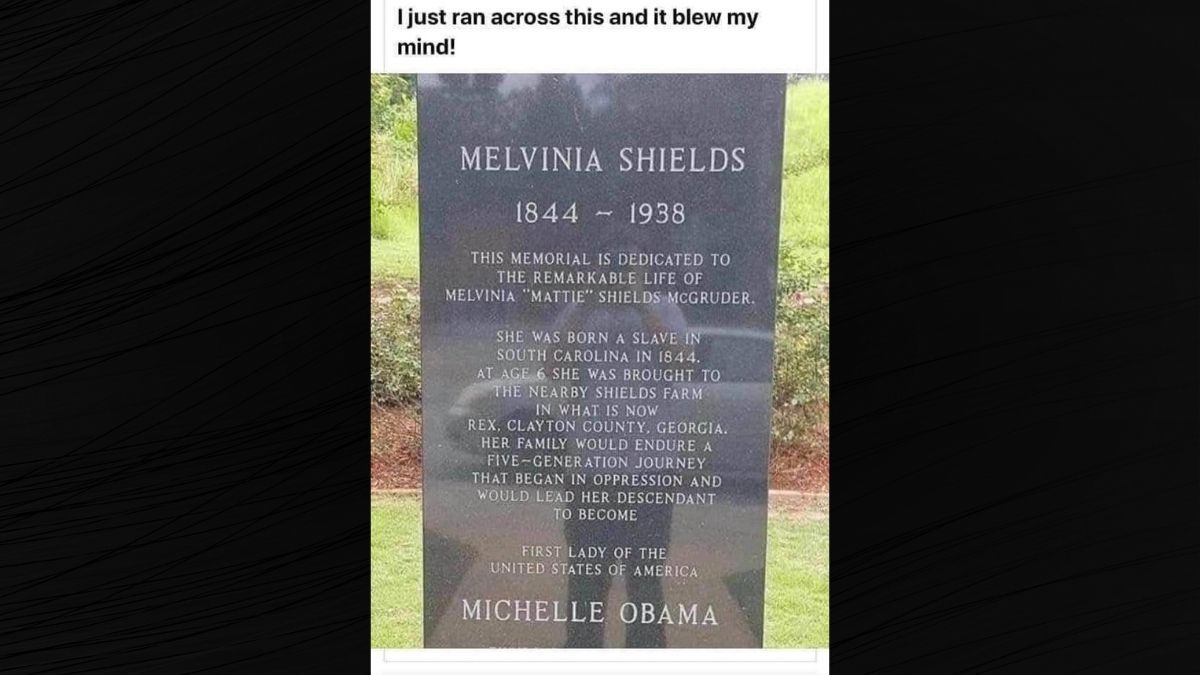 “Theirs is a story of hope,” are the words inscribed on a monument in Rex, Georgia, for Melvinia Shields, a former slave and ancestor of Michelle Obama, the first Black first lady of the United States. The monument marks a remarkable journey of a family from slavery all the way to the White House.

Obama’s ancestry was confirmed in a painstaking investigation by The New York Times in 2009. It described how in 1850, a slave girl named Melvinia was sent from South Carolina to Georgia. While still a teenager in Georgia, she would give birth to her son named Dolphus, fathered by an unknown white man, under unknown circumstances. Shields and the unknown white man who impregnated her just two years before the Civil War, were the great-great-great-grandparents of Michelle Obama.

A Snopes reader alerted us to this meme containing a photograph of a purported memorial to Obama’s ancestor, one that is still standing in Georgia today: Shields spent many years as a slave on a farm which is now in Rex, a town near Atlanta, Georgia. Soon after the New York Times report came out, locals called for a monument to commemorate her.

According to CNN and the Associated Press, officials said the monument was put up in 2012, but was knocked down in 2013. It was reportedly reinstalled soon after.

According to ExploreGeorgia.org, which is the official website of the Georgia Department of Economic Development:

A triumphant tale, Clayton County's Melvinia Shields Monument honors the inspiring five-generation journey of First Lady Michelle Obama's ancestry from slavery to the White House. Born into slavery in 1844, Melvinia Shields was relocated at the age of 6 from South Carolina to a farm in the area presently known as Rex, Clayton County, Georgia. A story that surpasses the boundaries of race and culture, the Melvinia Shields Monument is a place that invites all people to discover how the heritage and diversity of the African American experience has shaped America's modern history.

The monument also notes that she died and was buried in Kingston, Georgia, a town more than 70 miles away from Rex.

Turns out, this is not the only monument to Shields.

For years, she was entombed in an unmarked grave behind the Queen Chapel Methodist Church in Kingston. The Georgia Department of Transportation determined its location using ground-penetrating radar technology. In 2014, in a gathering that brought together a white descendant of Shields’ former owner and locals, the town inaugurated a similar slab that said, “This memorial marks the grave of Melvinia ‘Mattie’ Shields McGruder.” The monument is also mentioned on the city of Kingston’s official website.

The Kingston memorial, which records a different age for when Shields arrived at the farm in Rex, says:

She was born a slave in South Carolina in 1844. At age 8 she was brought to the Shields farm near what is now Rex. Clayton County, Georgia. In the late 19th century she moved to Kingston to be near her people. Her family would endure a five-generation journey that began in oppression and would lead her descendant to become first lady of the United States of America: Michelle Obama. Melvinia’s story is one of hope.

Megan Smolenyak, a genealogist, worked with The New York Times to unearth this history through 19th-century probate records, marriage licenses, and interviews with elderly women who remembered the family. Shields gave birth to a biracial son named Dolphus in 1859, when she was possibly just 15 years old. The father is unknown, with speculation that it was her former owner, Henry Shields. But other white men were also present on the farm, and could have impregnated Shields.

Dolphus and his siblings were given the surname Shields by Melvinia, which could indicate their paternity, but also highlights how former slaves often took their owners’ surnames. Even after being emancipated, Shields continued working on an adjacent farm to where she was enslaved, under the son of her former owner. By the time she was in her thirties or forties, she left to reunite with other former slaves near the Alabama border. Dolphus married Alice, a daughter of one of these former slaves, who ended up being Michelle Obama’s great-great grandmother.

The family entered the working class through Dolphus who was a carpenter and could read and write unlike his mother. Dolphus’ grandson was a painter named Purnell Shields who lived in Chicago, and like other Black people who moved north during the Great Migration took advantage of growing opportunities there. Purnell Shields was Michelle Obama’s grandfather.

Melvinia worked as a midwife and resided in Kingston for decades. William Hill, a local senior citizen in Kingston, told the Rome-News Tribune at the monument dedication in 2014 that she delivered him, “She delivered me, named me and called me her baby until the day she died,” Hill said. “She was real nice.”

Smolenyak interviewed Melvinia's descendants, many of whom still live in Kingston:

The Obamas did not comment on the New York Times story in 2009 “in part because of the personal nature of the subject,” according to their aides.

Given that the authenticity of the monument to Melvinia Shields and her place in the family history of Michelle Obama are well documented, we rate this claim as “True.”