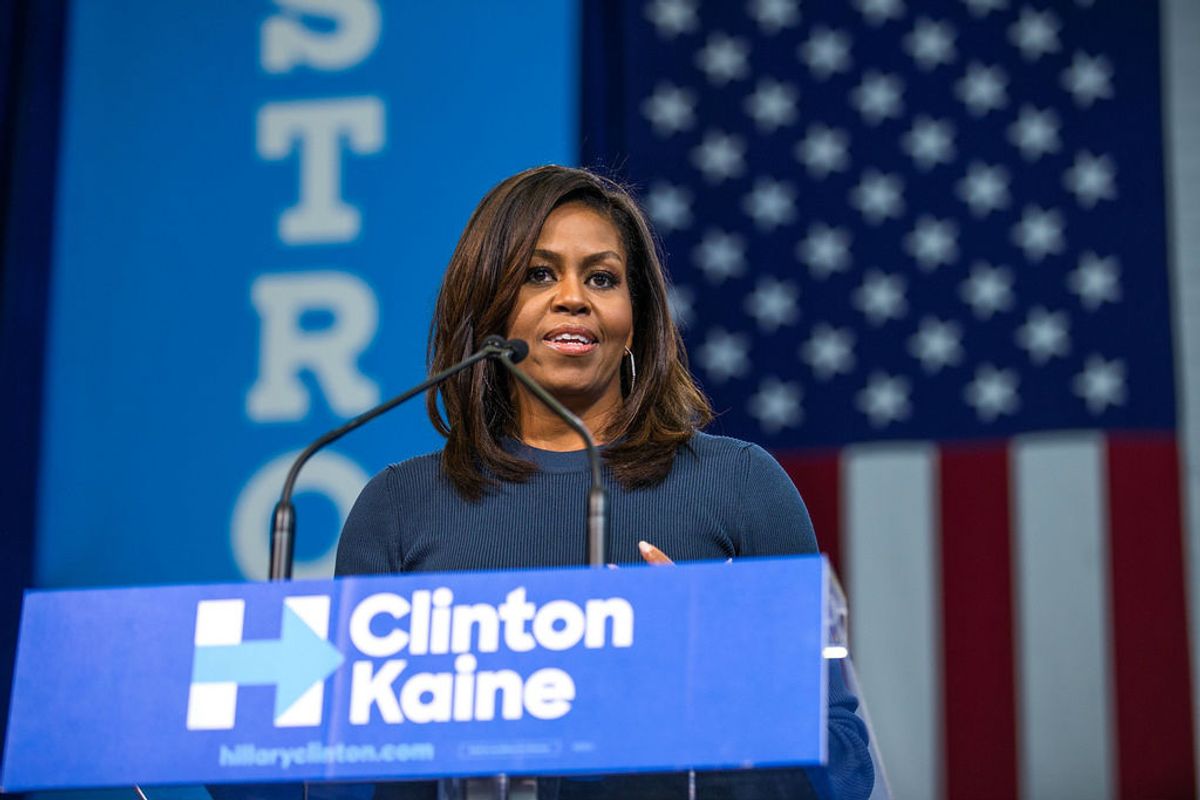 On 1 November 2016, the disreputable web site Your News Wire published an article reporting that First Lady Michelle Obama had deleted all mentions of Hillary Clinton from her Twitter accounts shortly after the FBI announced they may have discovered additional e-mails related to the Democratic presidential candidate's infamous private server:

Michelle Obama has scrubbed all references to Hillary Clinton from both of her Twitter accounts as news breaks that Clinton is under two different FBI investigations involving four FBI offices.

The @FLOTUS account has been wiped clean of all traces of Hillary, and @MichelleObama, a verified page with almost six million followers, has been scrubbed all the way back to 2013.

Is Michelle performing a last minute tidy up, clearing out the clutter before the dumpster fire of the Democratic campaign finally burns out?

Your News Wire didn't provide any evidence that Obama's account had been altered in the days following FBI director Jim Comey's announcement, nor did they point to a single tweet that had been deleted. The claim that the @Flotus account had been "wiped clean of all traces of Hillary" is demonstrably false, as Michelle Obama tweeted that she was "With Her" (i.e., Hillary Clinton) on 29 July 2016:

So moved and so inspired by that powerful speech from our next President! #ImWithHer and I am fired up and ready to go. -mo

The majority of the content posted to the @FLOTUS account is bipartisan (or at least not overly politicized) in nature. As of this writing, her most recent three tweets were about education, the architecture of the White House, and Halloween. Other than the previously mentioned Tweet, the @Flotus account has rarely been used to talk about the 2016 election.

Your News Wire also falsely claimed that the @MichelleObama account had been "scrubbed all the way back to 2013." Again, the web site provided no evidence to back up their claim or pointed to a single tweet that had been deleted.

The personal @MichelleObama Twitter account has largely been inactive since March 2013, around the time that the First Lady started up the official @Flotus account in its place:

You're right — Michelle Obama has been on Twitter as @MichelleObama since late 2011, gaining 2.6 million followers in that time.

Here's the skinny: @MichelleObama is a political campaign account run by staffers at Obama for America (OFA), Barack Obama's presidential campaign. @FLOTUS, on the other hand, is an official government account for the first lady of the United States.
The difference?

@MichelleObama tweets are considered messages from Michelle, the presidential candidate's wife, not Michelle, the first lady of the United States. That's why the account has been largely quiet since Election Day: It has tweeted only six times since the end of the campaign, half of them retweets from the @BarackObama campaign account.

It should also be noted that Michelle Obama can't simply delete dozens of messages from her Twitter account. One of the reasons the First Lady started using the @Flotus handle instead of @MichelleObama was so that her tweets would be archived by the White House:

On Twitter, for example, the handle @POTUS will be made available to the 45th President of the United States on January 20, 2017. The account will retain its more than 11 million followers, but start with no tweets on the timeline. @POTUS44, a newly created handle maintained by NARA, will contain all of President Obama’s tweets and will be accessible to the public on Twitter as an archive of President Obama’s use of the account. In addition, President Obama’s tweets will also be archived at NARA, where they will be preserved and accessible in the same manner as all other Presidential records. This will also be the case for other Twitter handles, including @WhiteHouse, @FLOTUS, @PressSec, and @VP. Individual official accounts, like @KS44, will transition to NARA and continue to be accessible for the public to view as an archive of all tweets sent by White House staff.