Did Michelle Obama Praise Harvey Weinstein as a 'Wonderful Human Being' in 2013?

The former first lady thanked Weinstein for his role in a White House student film event — four years before dozens of women first publicly accused him of rape, sexual assault, and sexual harassment. 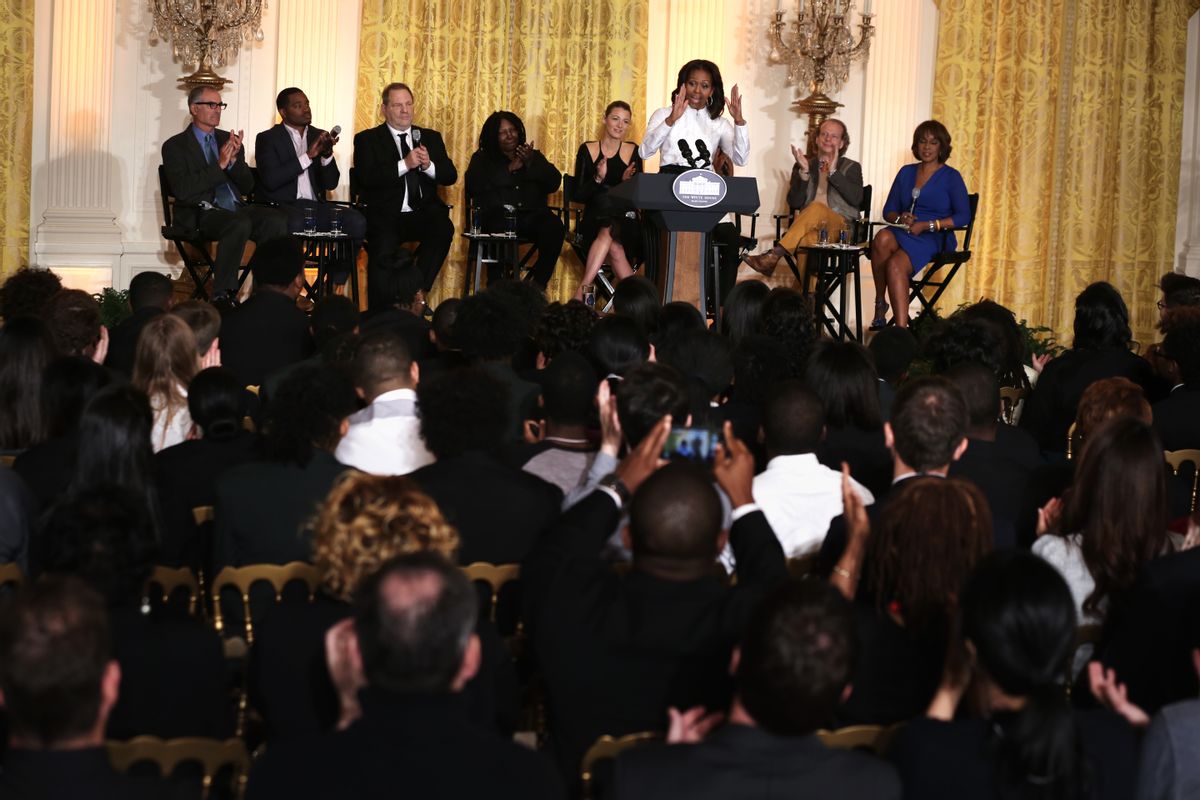 Claim:
In 2013 then-first lady Michelle Obama praised Harvey Weinstein as a "wonderful human being" and a "good friend."
Rating:

In February 2020, after former film producer Harvey Weinstein was convicted of raping one woman and sexually assaulting another, an old video re-emerged online which appeared to show former first lady Michelle Obama praising Weinstein as "a wonderful human being."

Obama's remarks, and a short accompanying video clip, were promulgated chiefly by right-leaning, pro-Trump Twitter accounts, as shown below. The footage shows her describing Weinstein as "a wonderful human being" and "a good friend."

Michelle Obama did indeed once describe Weinstein as a "wonderful human being." The footage and remarks included in those social media posts were authentic and unedited. However, many posts did not include an important piece of context — Obama made those remarks in 2013, four years before dozens of women first publicly accused Weinstein of rape, sexual assault, sexual harassment, and various other sexual improprieties. As a result, her praise of Weinstein should not be interpreted as an endorsement of his offenses.

The former first lady was speaking in the East Room of the White House on Nov. 8, 2013, at a Student Film Symposium. Towards the beginning of her speech, she emphatically thanked Weinstein for his role in "organizing" the event:

"I want to start by thanking Harvey Weinstein for organizing this amazing day. [Audience applauds]. Harvey. This is possible because of Harvey. He is a wonderful human being, a good friend, and just a powerhouse. And the fact that he and his team took the time to make this happen for all of you should say something, not about me or about this place, but about you [points to audience]. We are here because of you."

Weinstein himself was present at the event, seated behind Obama while she spoke: The official transcript of Obama's full remarks can be read here. The Obama White House website described the event as providing high school students from Washington D.C., Boston, and New York "an opportunity to learn about animation, special effects, makeup, costume, directing, music and sound effects, and heard from leaders in the film industry about how their education helped them succeed."

Before beginning her college education at Harvard University in the fall of 2017, the Obamas' eldest daughter Malia worked as an intern for the Weinstein Company, according to news reports and court records. That was before October 2017, when dozens of women first began to come forward to publicly accuse the influential producer of a range of sexual offenses across several decades, including rape, sexual assault, and sexual harassment.

Although Weinstein's behavior had been the subject of rumor and speculation within the film industry for several years, it seems unlikely that the Obamas had full knowledge of the allegations against him, given Malia's work placement just months before those stories first broke publicly. In light of Michelle Obama's glowing tribute to Weinstein in November 2013, it seems equally unlikely that she was aware of his offenses at that time. We contacted the office of Barack and Michelle Obama, asking when the former first lady first became aware of those allegations, but we did not receive a response in time for publication.