Michelle Wants YOU to Monitor Your Own Family Members

The First Lady gave a 2014 speech in Topeka commemorating Brown v. Board of Education but did not urge students engage in "KGB-style" enforcement of racial tolerance. 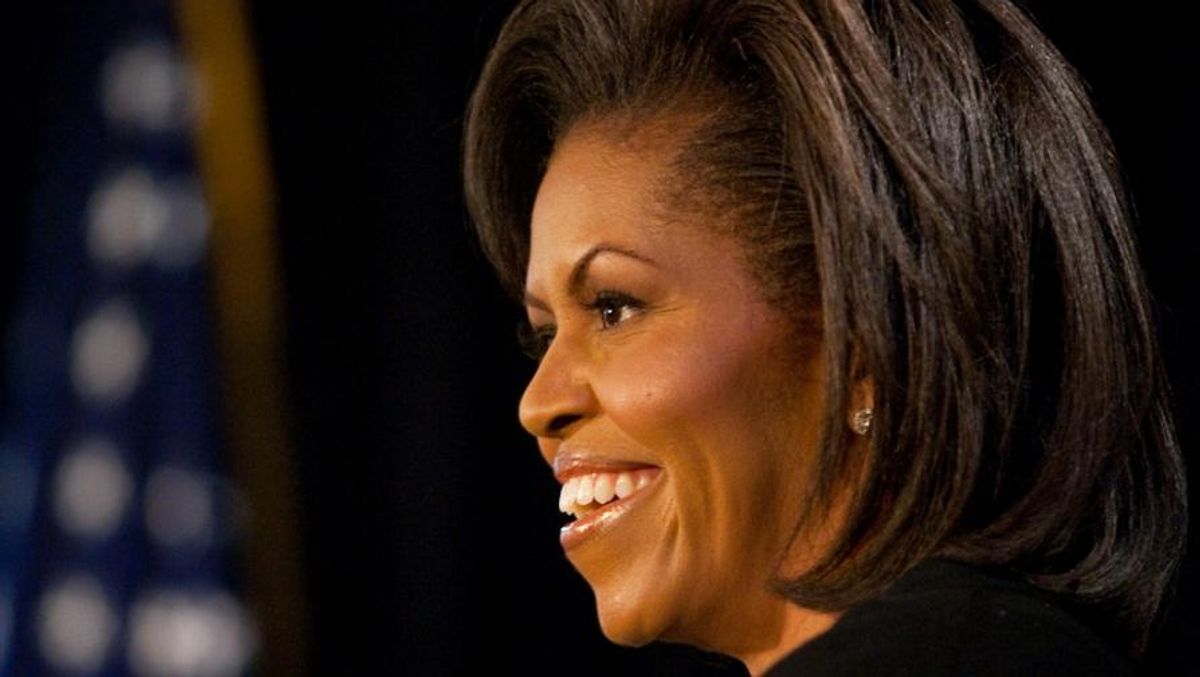 On 13 April 2016, the conservative blog US Herald posted a story reporting that First Lady Michelle Obama had told students in Topeka, Kansas, to monitor their family members' racially-intolerant speech "KGB-style," in violation of their constitutional right to believe whatever they wish or associate with whomever they choose:

Clearly Michelle has an issue with race, and has taken to urging high school students to monitor their own family members for racial intolerance and to go even one step further and correct it.

Addressing the High School graduating classes of Topeka, Kansas she said, “Our laws may no longer separate us based on our skin color, but nothing in the Constitution says we have to eat together in the lunchroom, or live together in the same neighborhoods.”

She then added, “There’s no court case against believing in stereotypes or thinking that certain kinds of hateful jokes or comments are funny.”

She then stated her wacky plan saying that students should, “drag my generation and your grandparents’ generation along with you,” down the path of racial tolerance ... quite a mouth fill for someone who views all issues in “black and white”

Perhaps someone should inform our First Lady that it’s within that very right within our Constitution we can pick and choose who we eat with.

The article was disingenuously crafted to make it appear as though Mrs. Obama were advocating that students watch family members Big Brother-style and strong-arm them into sharing her beliefs on racial justice. The piece took a handful of phrases out of context from her 17 May 2014 speech to create that impression, failing to note the historical significance of the date on which it delivered or the fact that it was two years old.

Mrs. Obama gave the speech at the Topeka School District's Senior Recognition Day, held at the Expocentre, on the 60th anniversary of the Supreme Court's landmark Brown v. Board of Education ruling that ended legislated racial segregation in American schools. The First Lady told graduating high school seniors that despite the high court's 1954 decision, daily challenges to reaching the goal of racial equality remained.

The First Lady's point in the passage cited by US Herald was that although the law may now ban racial segregation, it doesn't necessarily require integration — and thus people from different racial backgrounds still often remain separated from each other in schools and neighborhoods. a circumstance that fosters the perpetuation of older racial stereotypes and prejudices. Therefore, Mrs. Obama urged the students to whom she spoke, they should use their own experiences as members of a diverse community to educate others:

But remember, not everyone has grown up in a place like Topeka. See, many districts in this country have actually pulled back on efforts to integrate their schools, and many communities have become less diverse as folks have moved from cities to suburbs.

So today, by some measures, our schools are as segregated as they were back when Dr. King gave his final speech. And as a result, many young people in America are going to school largely with kids who look just like them. And too often, those schools aren’t equal, especially ones attended by students of color which too often lag behind, with crumbling classrooms and less experienced teachers. And even in schools that seem integrated according to the numbers, when you look a little closer, you see students from different backgrounds sitting at separate lunch tables, or tracked into different classes, or separated into different clubs or activities.

So while students attend school in the same building, they never really reach beyond their own circles. And I’m sure that probably happens sometimes here in Topeka, too.

Now, our laws may no longer separate us based on our skin color, but nothing in the Constitution says we have to eat together in the lunchroom, or live together in the same neighborhoods. There’s no court case against believing in stereotypes or thinking that certain kinds of hateful jokes or comments are funny.

So the answers to many of our challenges today can’t necessarily be found in our laws. These changes also need to take place in our hearts and in our minds. And so, graduates, it’s up to all of you to lead the way, to drag my generation and your grandparents’ generation along with you.

And that’s really my challenge to all of you today. As you go forth, when you encounter folks who still hold the old prejudices because they’ve only been around folks like themselves, when you meet folks who think they know all the answers because they’ve never heard any other viewpoints, it’s up to you to help them see things differently.

And the good news is that you probably won’t have to bring a lawsuit or go all the way to the Supreme Court to do that. You all can make a difference every day in your own lives simply by teaching others the lessons you’ve learned here in Topeka.

Maybe that starts simply in your own family, when grandpa tells that off-colored joke at Thanksgiving, or you’ve got an aunt talks about “those people.” Well, you can politely inform them that they’re talking about your friends.

Or maybe it’s when you go off to college and you decide to join a sorority or fraternity, and you ask the question, how can we get more diversity in our next pledge class? Or maybe it’s years from now, when you’re on the job and you’re the one who asks, do we really have all the voices and viewpoints we need at this table? Maybe it’s when you have kids of your own one day, and you go to your school board meeting and insist on integrating your children’s schools and giving them the resources they need.

What the First Lady advocated was gentle correction and persuasion to change "hearts and minds" on issues of racial prejudice, not that schoolchildren should "monitor their own family members for racial intolerance" and engage in "KGB-style" spying and reporting.