A cringe-inducing quote from the former lawmaker turned out to also be a fake one. 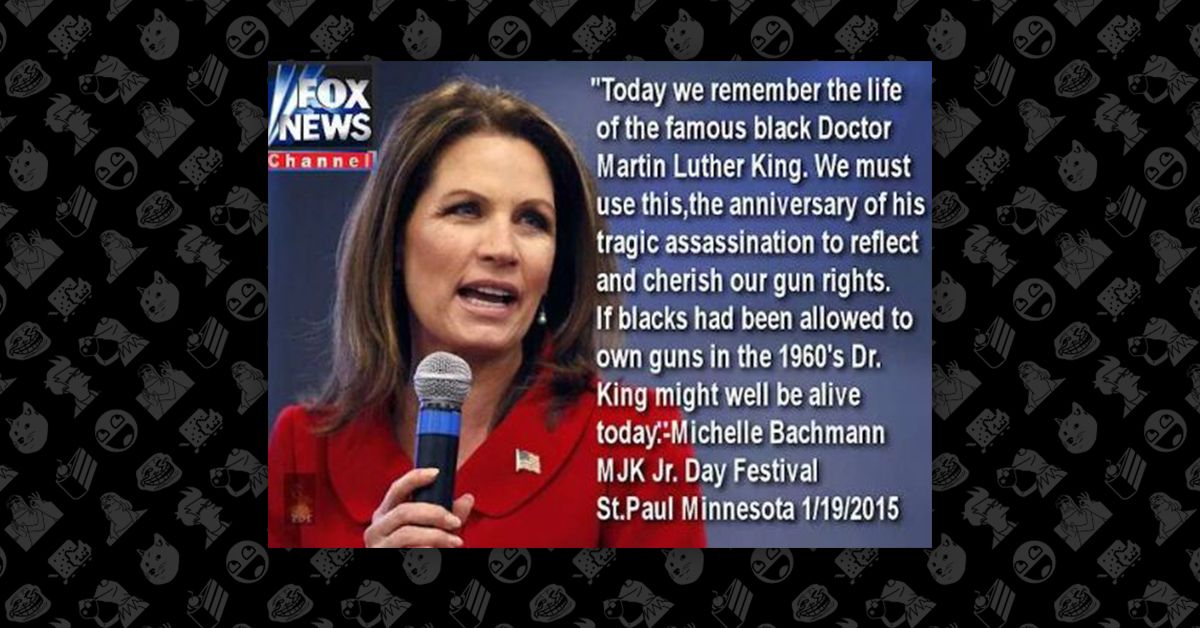 Claim:
Michele Bachmann said Martin Luther King would still be alive today if black people were allowed to own guns in the 1960s.
Rating:

On 19 January 2015, an image of Michele Bachmann along with a quote purportedly uttered by her about gun rights and the assassination of Martin Luther King began circulating on the Internet: The image received a viral push when it was posted to Reddit's "Forwards from Grandma" subreddit. The text from the image was also posted to the Orange County community politics section on Craigslist:

"Today we remember the life of the famous black doctor Martin Luther King. We must use this, the anniversay of his tragic assassination to reflect and cherish our gun rights. If blacks had been allowed to own guns in 1960's, Dr. King might well be alive today."Can you say MORON??

Both of these instances claim Bachmann said this during the Martin Luther King, Jr. Day Festival in St. Paul, Minnesota on 19 January 2015.

While it is true several prominent Minnesota politicians, including Gov. Mark Dayton, St. Paul mayor Chris Coleman, and U.S. senators Amy Klobuchar and Al Franken joined citizens in the Twin Cities to honor Martin Luther King, there is no evidence showing Michele Bachmann was present at that event. Furthermore, Bachmann and her dubious diatribe were not mentioned by any local newspapers, and the only place where this questionable quote appeared was on a viral Michele Bachmann meme and a single California Craigslist post about an event that supposedly happened in Minnesota.

It should also be noted this Michele Bachmann meme has nothing to do with Fox News. The photo was taken by Reuters photographer Jeff Haynes at a campaign stop in Des Moines, Iowa, on 9 December 2011. The Fox News logo was later digitally superimposed over the image.