Did Mexico Sign a Major Trade Deal With Argentina to Retaliate Against Trump's Border Wall Plans?

Mexico is in trade talks with Argentina, but no deal has been finalized; the cost to American farmers would likely be lower than claimed. 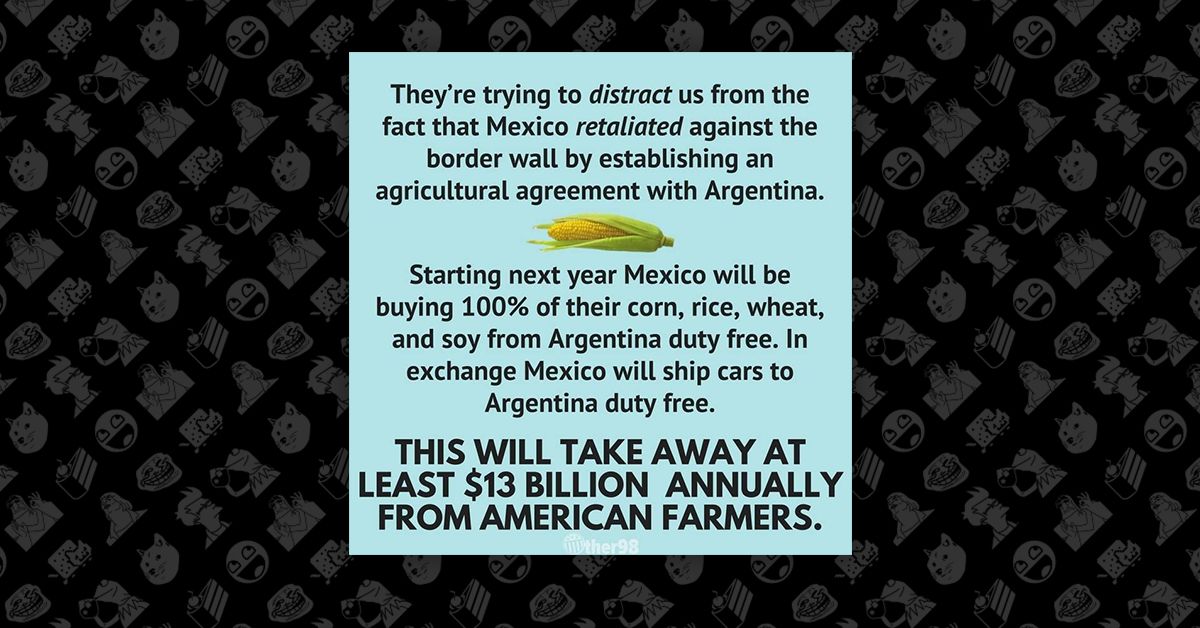 Claim:
In retaliation for Donald Trump's border wall plan, Mexico will soon shift all its imports of corn, rice, soy, and wheat from the United States to Argentina.
Rating:

Mexico is currently in trade negotiations with Argentina, which a Mexican government minister has said will likely involve Mexico importing grains from Argentina.

No deal has been finalized, and the catalyst for the negotiations is the uncertainty caused by Donald Trump's vow to renegotiate the North American Free Trade Agreement — not his plan to build a border wall.

Two of Donald Trump's most prominent 2016 campaign pledges were to build a border wall along the Mexican border (or rather, to reinforce and extend it; a wall already exists along hundreds of miles of the international border), and to renegotiate the North American Free Trade Agreement, a 1994 arrangement between the United States, Canada and Mexico which he called "the single worst trade deal ever approved in this country."

In October 2017, left-wing Facebook page "The Other 98%" posted a widely-shared meme which claimed that Mexico had — in retaliation for Trump's border wall plans — signed a major agricultural trade agreement with Argentina, which would have very harmful effects on American farmers:

They're trying to distract us from the fact that Mexico retaliated against the border wall by establishing an agricultural agreement with Argentina. Starting next year Mexico will be buying 100% of their corn, rice, wheat and soy from Argentina duty free. In exchange Mexico will ship cars to Argentina duty free. This will take away at least $13 billion annually from American farmers. As of 1 November 2017, Mexico and Argentina have not signed an agreement like the one described by "The Other 98%", but the two countries have held talks about a more limited (though still significant) trade deal involving grains and cars. Furthermore, the main catalyst for the negotiations has been the uncertainty caused by Donald Trump's vow to renegotiate NAFTA rather than his plans to build a border wall.

The source cited by "The Other 98%" is a September 2017 article by Daily Kos, which reported:

Mexico already retaliated against Trump and his insults earlier this year by establishing an agricultural agreement with Argentina. Starting next year Mexico will be buying 100% of her corn, rice, wheat and soy from Argentina duty free. In exchange Mexico will ship cars to Argentina, duty free. This will taken [sic] away $13 billion annually from American farmers.

It's not clear what the source of these claims is, but a similar meme appeared online earlier in 2017, which read:

Mexico has retaliated against Trump's racial profiling and insistence that Mexico will pay for his border wall. Beginning in 2018, Mexico will be buying its corn, rice, wheat and soy from Argentina. Not America. American farmers stand to lose $13 billion. The ripple effect will be even more devastating. The fact that this announcement was made during Trump's Made in America week, is just karmic icing.

"Made in America Week" took place from 17-24 July 2017; we found no evidence of any deal between Mexico and Argentina being announced during that time period. However, talks have been ongoing between the two countries.

In the spring of 2017, Mexico's Deputy Economy Minister Juan Carlos Baker made several comments in interviews about his country's negotiations with Argentina and Brazil. On 26 March 2017, the Financial Times reported:

Mexico, the world’s biggest buyer of US corn, is considering offering duty-free access to Brazilian and Argentine maize as an alternative to American imports in a move that could have big consequences for US farmers worried about Donald Trump’s trade and tax agenda.

"I am pretty optimistic about the possibility of having a deal with these countries soon," Juan Carlos Baker, Mexico’s deputy economy minister, told the Financial Times in an interview. "We’re pretty far advanced with Brazil . . . Argentina is a few steps behind," he said....

The following month, Baker told Reuters that a deal with Argentina could be finalized by the end of 2017:

Mexico, seeking closer ties with the rest of Latin America, expects to finish negotiations on a trade deal with Argentina involving cars and agricultural products around the end of the year, Mexico’s deputy minister for foreign trade said in an interview on Tuesday.

Under the deal, Argentina could gain part of the lucrative grains market in Mexico, Latin America’s No. 2 economy, Baker told Reuters.  In 2015 Mexico imported $2.3 billion worth of U.S. corn and $1.4 billion of U.S. soy. But Baker said those numbers will likely decrease under a renegotiated North American Free Trade Agreement called for by Trump.

"The potential is there," Baker said. "The Argentine exporters could find attractive conditions in Mexico." Mexico, in turn, could export cars to Argentina, he said. "We have a very strong manufacturing industry and Argentina is an important market for us," Baker said.

A trade deal between Mexico and Argentina may be in the works, but it has not yet been announced as of 1 November 2017. However, assuming a deal goes ahead to shift Mexico's importation of certain products from the United States to Argentina, the numbers are significant — but not as dramatic as they are in the meme.

This yields a total of $6.3 billion in U.S. exports to Mexico of corn, rice, wheat and soy — the four products specified in the above meme. So even if Mexico did decide to stop importing all these products from the U.S., the likely annual financial cost to the American agriculture industry would be extremely significant, but still only around half the $13 billion claimed.

It's not entirely clear where the figure of $13 billion came from, but it might have originated in an October 2017 letter sent to Commerce Secretary Wilbur Ross, and signed by dozens of food and agriculture companies and industry associations, warning Ross about the dangers, as they see them, of withdrawing from NAFTA.

According to a study by ImpactECON, if Canada, Mexico, and the United States return to “most favored nation” (MFN) tariff rates upon any withdrawal from NAFTA, the negative impact on the United States will far outweigh any benefits from higher U.S. tariffs, including a net loss of 256,000 U.S. jobs, a net loss of at least 50,000 jobs in the U.S. food and agriculture industry, and a drop in GDP of $13 billion from the farm sector alone.

The study mentioned here was an August 2017 working paper produced by the economic consulting firm ImpactECON. It did not actually mention any figure of $13 billion. Rather, it projected that over the course of two to three years after a U.S. withdrawal from NAFTA, real GDP in the United States would fall by as much as 0.09 percent.

Gross domestic product, or GDP, is the combined market value of all goods and services produced in a particular geographic area (in this case, the United States.) It is a calculation commonly used to measure the total size of an economy. Real GDP is gross domestic product adjusted for inflation - meaning, roughly speaking, the size of the economy in relation to the cost of living.

As of the third quarter of 2017 (when the ImpactECON report was published), the real GDP of the United States was $17.01 trillion, according to figures from the Bureau of Economic Analysis. A 0.09 percent decline in that would amount to a $15.3 billion loss — not far off the $13 billion posited by the food and agriculture industry, in their letter.

There are a couple of things to note here: firstly, the 0.09 percent decline estimated in the ImpactECON report relates to the entire U.S. economy, and not "the farm sector alone," as mentioned in the letter.

In fact, the working paper projects a very small increase in production for the crops and forestry sector (0.04 percent, page 20), accompanied by a significant boost to production in the sugar sector (5.11 percent), but it also projects production declines of between one and two percent in the meat, food and livestock and fishing sectors.

Secondly, this real GDP declined is projected to happen "in the next 2-3 years", so if the meme is using the letter to Wilbur Ross as the source of its $13 billion figure, it is misrepresenting the decline as happening "annually."