A viral story in Spanish-language media about a family naming their daughter "Breksit," after the UK's decision to leave the EU, is a hoax. 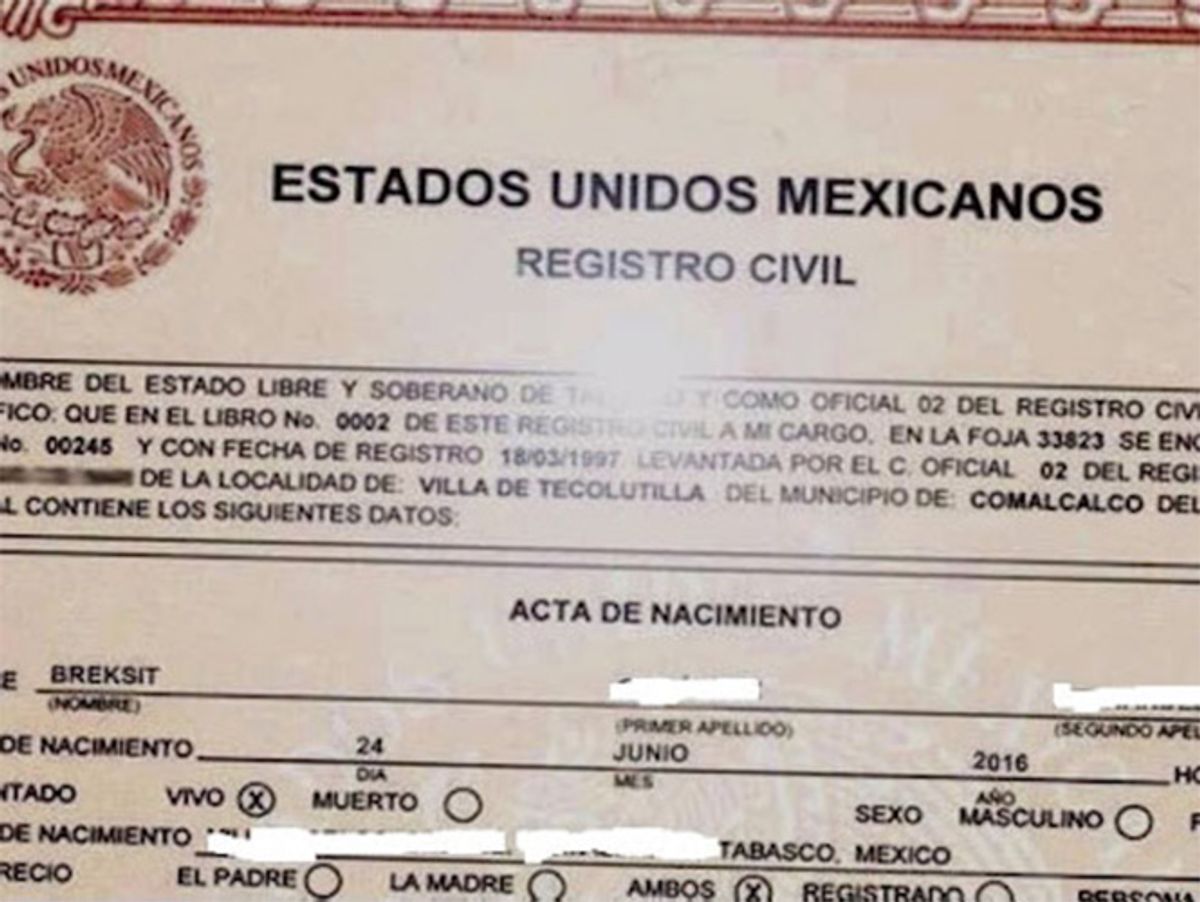 Claim:
A family in Mexico named their baby daughter "Breksit," after the results of Britain's EU referendum.
Rating:

In late June 2016, a story wended its way through Spanish-language media about a baby born in Mexico whose parents decided to name her "Breksit," after the heavily controversial vote by the United Kingdom to leave the European Union. The baby was apparently born in the state of Tabasco just hours after the referendum.

The story quickly took on a life of its own:

Can you believe this?  Look at this case of a purported birth certificate circulating on social media, in which a baby girl born yesterday, just hours after the referendum ended, was given the name "Breksit".

Although the baby's parents get points for their creativity for their transliteration of the Anglicism "Brexit", we aren't convinced by the decision to put that name on this child.  Didn't they think of the bullying?

In the past few years, there have been initiatives put in place to prohibit parents from giving strange names to their children.  Apparently, this message hasn't reached Tabasco...

According to some versions of the story, little Breksit would have been Bremain — had the the majority of British voters decided to stay in the European Union.

However, as entertaining as it is (and despite the existence of unusual names in Mexico, as in any other country) this story isn't true.  It was swiftly debunked by ElPais.com, a Madrid-based Spanish-language news outlet, which pointed out that the birth certificate appears to have been digitally manipulated:

We contacted a representative from the registrar's office of Comalcalco (Tabasco), which was supposedly issued the document, who told us that the record is false. In an email, the representative explained that the date of birth (June 24, 2016) cannot be after the record date (March 18, 1997), as shown in the document.

Furthermore, Villa de Tecolutilla (the name of the place little Breksit was allegedly born) is an anachronism, as the municipality declared that it was a city, not a village, in 2014. That means any birth certificates issued from the region after 2014 would reflect the change from "villa" to "ciudad".

Finally, and most damning of all, a birth certificate with a few different details but with the same place of birth and registration number appeared in a news story in 2015: While there may be baby Breksits born somewhere in the world, this birth certificate is a hoax.