An Animal Planet program that supposedly revealed the existence of mermaids was a fake documentary. 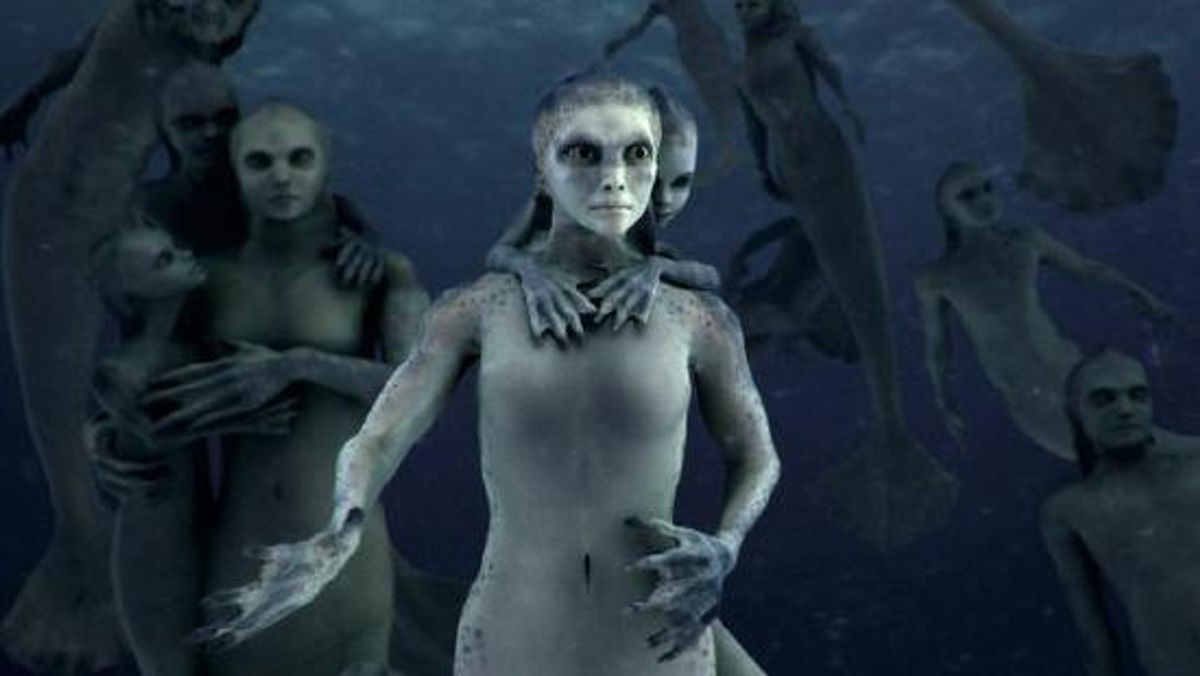 On 27 May 2012, Discovery's Animal Planet channel aired a pseudo-documentary entitled Mermaids: The Body Found in the U.S., a purely fictional work dealing with a purported federal coverup of a discovery involving scientists from the National Oceanic and Atmospheric Administration (NOAA) that proved the existence of a remnant population of mermaids (described as being an evolutionary offshoot of the "aquatic ape" hypothesis, a generally discounted idea that early Hominid species went through an aquatic phase in their evolution). The program was not fact but rather speculative science fiction, which included obvious CGI-produced video sequences like the one displayed above and actors fictional characters such as "Dr. Paul Robertson, former NOAA scientist." To enhance the pseudo-reality aspect of the program, a web site was established at believeinmermaids.com offering no content other than a opening page hoax proclaiming that the site's domain had been seized by the U.S. Department of Justice and Homeland Security.

After this program aired in Australia in April 2011, Brad Newsome of the Sydney Morning Herald wrote of it that:

The thing that's got my goat at the moment is a fake documentary on Animal Planet called Mermaids: The Body Found. It has actors playing scientists talking about how they did an autopsy on some mermaid remains, and how the US government swooped and covered the whole thing up. There's grainy fake video of mermen being hauled up in fishing nets, the whole box and dice.

The version that I saw doesn't even do viewers the courtesy of admitting that it's fake until the credits are about to roll.

It starts off talking up the rather fringe "aquatic ape" notion of human evolution and ends up with some classic-looking CGI mermaids that make zero evolutionary sense. From the waist up they're slender modern humans (no insulating blubber? Brrr!), while from the waist down they're to top it all off they've got a dolphin-like sonar system inside their skulls. Over what period of time is all this supposed to have happened? A few tens of thousands of years? A few hundred thousand years?

The documentary makes much of the fact that whales evolved from terrestrial ancestors, but that took millions of years, not the kind of evolutionary eyeblink that Mermaids seems to be talking about.

It's not that there's anything wrong with a bit of speculative evolution, as long as you make it clear from the outset that you're making stuff up.

The Los Angeles Times' TV skeptic noted of Mermaids: The Body Found that:

"Mermaids" is fiction. It's a fake TV documentary. You may have to look hard to see the disclaimer, but the producers and Animal Planet make it clear that this program is totally and completely made up.

At least they almost make it clear. They don't exactly make a distinction between what is real and what is faked, and they really don't seem to care.

With fake news broadcasts; fake amateur video and fake expert interviews, the story lays out a fake conspiracy worthy of the "X-Files." Here, the Navy is so determined to develop their sonar technology that they're prepared to drive to extinction an intelligent species related to humans.

It's remarkable how well this fake documentary mimics actual programs claiming to reveal actual creatures. Substitute Mermaids for Bigfoot, Chupacabra, the Loch Ness monster, ghosts and aliens and it's hard to make a distinction between what's real but faked, and what's really fake.

Brian Switek was more caustic in his criticism of the Mermaids program, writing of it in Wired that:

Speculative biology can be a lot of fun — to wonder how different forms of life might have evolved. And, with the right context and presentation, Mermaids could have been a unique way to highlight evolutionary and biological ideas. But rather than being a hook for communicating actual science, Mermaids was a sensationalistic end in itself. The show was meant to titillate and deceive — yet another bit of noxious rot in what I have often called television’s bottomless chum bucket. I’m sure Animal Planet would defend itself by saying that it issued a disclaimer, but clearly viewers either tuned out or just didn’t pay attention. When a science fiction show, dressed up as a documentary, presents the “Dramatic Re-Enactment” caveat at the bottom of some scenes, it’s not surprising that some viewers were confused about what they were actually seeing.

Not that my debunking will do much good. I don’t know how many people watched Mermaids, but I’m certain that many more people saw it than will ever read this post. That’s one of the most frustrating aspects of science communication. Misinformation spreads wide and fast, whether it’s coming from a fake documentary or a news report. Debunking false claims only makes a difference if people actually pay attention to the correction.

In response to airings of the fake documentary, the National Oceanic and Atmospheric Administration (NOAA) put up a page on their web site stating that "no evidence of aquatic humanoids has ever been found":

The faux-umentary purports to show two NOAA scientists as they go rogue, discover humanlike remains in the belly of a shark, conclude it's a mermaid, and then are subject to a federal cover-up.

Short story: The documentary convinced viewers that mermaids were real.

"After the show ran, people were talking about mermaids a little more. It started popping up on social media," said spokeswoman Keeley Belva. "It was an interesting topic, so we posted a short explanation. Maybe it will entice people to visit the NOAA.gov website."

But what about the seized [BelieveInMermaids] domain?

"It's a hoax," said Ross Feinstein, spokesman for U.S. Immigration and Customs Enforcement, which oversees the Department of Homeland Security.

A look at the code behind the page reveals it's still held by the parent company of the Animal Planet channel, Discovery Communications, which bills itself as "The World's #1 Nonfiction Media Company."

"The websites we seize are part of what we call 'Operation In Our Sites,' a sustained law enforcement initiative to protect consumers by targeting counterfeit and piracy on the Internet," said ICE's Feinstein. "This operation is focused on counterfeit goods and piracy, not freedom of speech — including those regarding the existence of mermaids."

In May 2013, Discovery's Animal Planet channel announced that during their upcoming "Monster Week" programming they would be airing an "extended cut" of Mermaids: The Body Found followed by a new special titled Mermaids: The New Evidence. This twin-bill of mermaid hoax programs became the most-watched telecast in Animal Planet’s history:

The most-watched telecast in Animal Planet’s history is about mermaids.

Sunday’s "documentary" Mermaids: The New Evidence delivered 3.6 million viewers, shattering the network’s ratings record. The program is not only a hoax, but a sequel to a hoax — to last year’s rather effortlessly debunked Mermaids: The Body Found, which fooled more viewers than you’d think.

The straight-faced Mermaids specials basically play like Alien Autopsy for a new generation, though at least the infamous Fox special had "Fact or Fiction?" as a nudge-nudge subtitle. Both Animal Planet specials purportedly show video of mermaids in the Greenland Sea, with actors playing scientists. The specials also darkly suggest there’s government cover-up of mermaid evidence, complete with a spin-off site that says it’s been seized by the U.S. Department of Justice and the Department of Homeland Security.

Animal Planet’s press release touting the new ratings continued the game, referring to the special’s "exclusive interview with Dr. Paul Robertson, former NOAA scientist." There was a disclaimer that the program is science fiction, but you have to look for it in the show’s closing credits.