Was a Statue of Melania Trump Set on Fire in Slovenia?

A wooden likeness of the first lady was torched during the 2020 Fourth of July weekend. 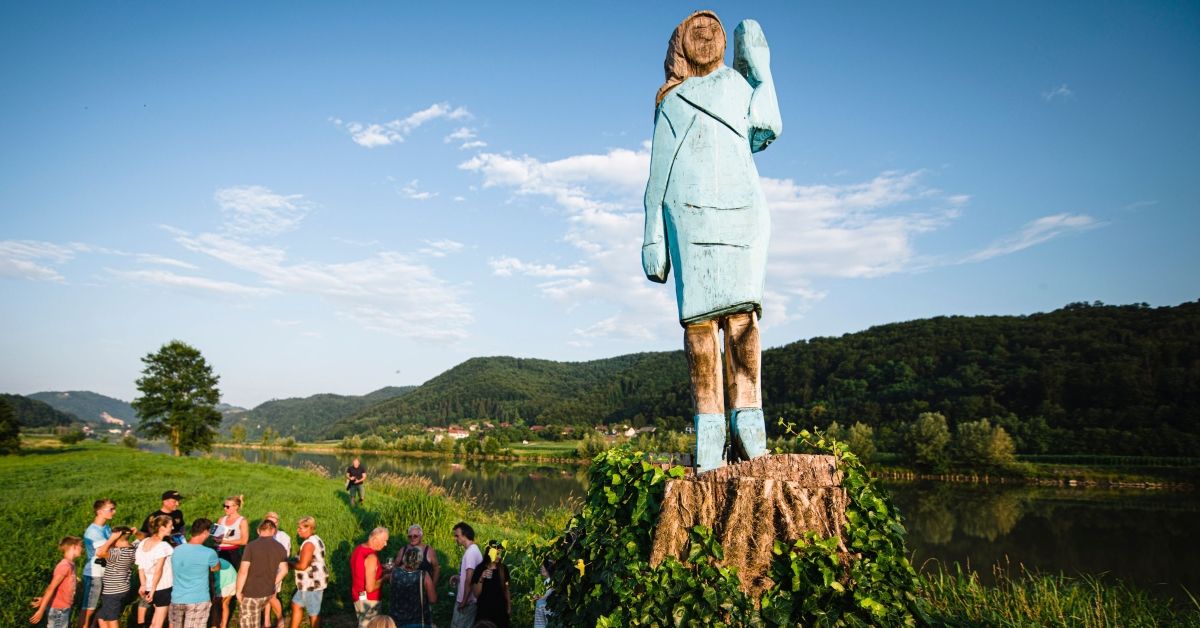 Claim:
A statue of first lady Melania Trump in her native country of Slovenia was damaged in a fire during the 2020 Independence Day weekend in the United States.
Rating:

U.S. President Donald Trump wasn’t the only occupant of the White House under fire in the summer of 2020. As his administration took criticism for its hard-line stance against the destruction of historical monuments associated with slavery in reaction to nationwide protests against police brutality and racism, a wooden statue of first lady Melania Trump near her hometown in Slovenia was reported to have literally been set on fire over the Fourth of July weekend.

Snopes readers asked us to look into this claim, and we found numerous media reports confirming that the wooden structure was indeed burnt until it was partially blackened, though no one knew who was behind it or why they did it.

Brad Downey, an American artist who commissioned the statue in a village near Melania Trump’s hometown of Novo Mesto, told reporters that he had it removed after he was informed by local police on July 5, 2020, that it was struck by fire. In an Instagram video of the removal, he shows the statue being sown off its tree-trunk plinth and hoisted into the air by a crane. Downey told ABC News:

I did file a police report, because I was told it is the only way forward for an investigation to be launched ... I am only interested in finding the attackers, and talking to them, not pressing charges against them ... it could have been vandals on both sides: The left-leaning people due to monument destruction buzz or right-leaning people who think it is disrespectful.

Carved by local artist Ales Zupevc from the trunk of a tree, the statue had been criticized in the past for being rough-hewn and unrecognizable: one local said it made Melania Trump look like "an evil stepmother of Pinocchio." The statue wore a painted pale blue coat, copying Melania Trump's outfit at her husband’s presidential inauguration in 2017.

Slovenian police are investigating the matter, and as of July 9, 2020, the culprits and motives remained unknown. A police spokesperson told ABC News:

Police are investigating the circumstances of the arson incident in the village of Rozno … The owner of the statue filed criminal charges against unknown arsonists.

We reached out to the White House for comment, and will update this post if more information becomes available.

Given the ample media coverage on the burning of Melania Trump’s statue, and the ongoing investigation from local police, we rate this claim as “True.”