A meme suggesting that Melania Trump plagiarized her Women's History Month statement from Michelle Obama is based on paraphrased and inaccurate quotes. 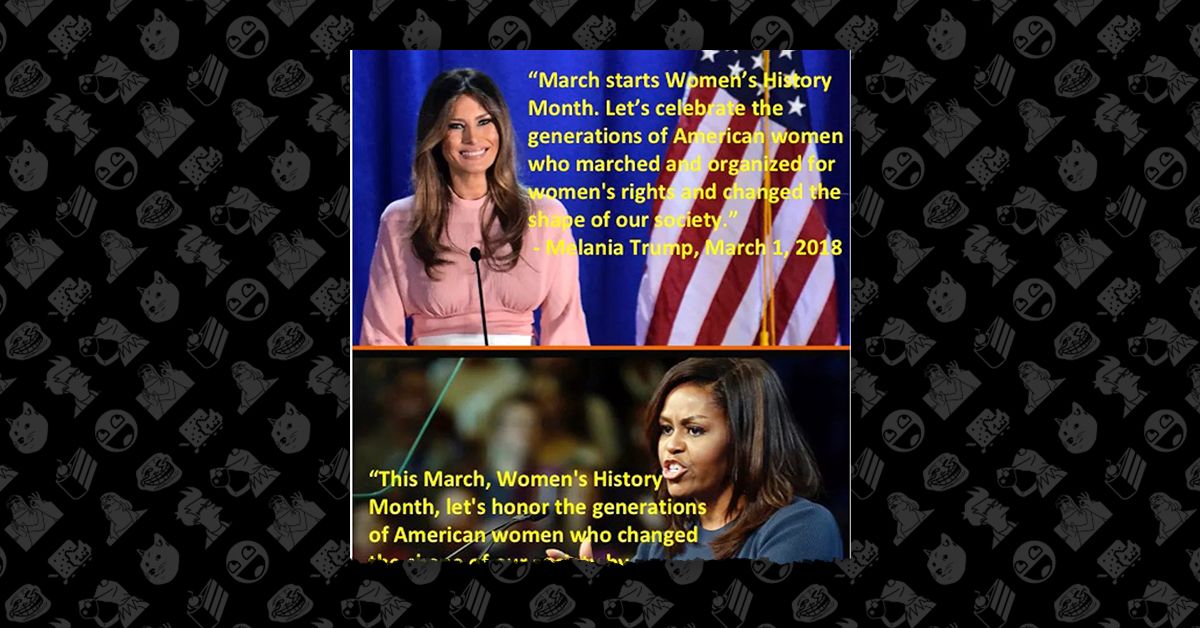 Another day, another joke about Melania Trump plagiarizing.

The First Lady has been dogged by rumors about her plagiarizing various speeches ever since she delivered remarks at the 2016 Republican National Convention that bore more than a few similarities to former First Lady's Michelle Obama's remarks at the Democratic National Convention in 2008. Trump has been accused of plagiarizing Obama's MLK Day remarks (false), her United Nation's speech (false) and in March 2018 a meme falsely suggested that she also stole her comments on Women's History Month from her predecessor: Neither of these quotes can be correctly attributed to Trump or Obama, and this meme contains no actual evidence that Trump plagiarized her statement from her predecessor.

The top quote appears to be an altered version of the message Melania Trump posted on Twitter on 1 March 2018. That message started off the same as the above-displayed quote, ("March starts Women's History Month") but the meme paraphrases the remainder of the tweet and excludes Trump's final sentence recognizing the humanitarian efforts of the Red Cross: We found no record of Michelle Obama uttering the phrase displayed in this meme.

The former First Lady made two public statements on 8 March 2012 (the date specified in this meme) related to Women's History Month. She delivered a speech at the the International Women of Courage Awards (the alleged quote does not appear in this speech), and she posted a message on Twitter.

Again, it seems that the creator of this meme reworked a genuine tweet that was sent by the former First Lady in March 2012:

The statements in this meme were altered in a way to make it seem as if they were more similar than they actually were. When we compare their genuine statements delivered by Michelle Obama and Melania Trump about Women's History Month, it's clear that there's no truth to this accusations of plagiarism:

MELANIA TRUMP: March starts #WomensHistoryMonth, a time to celebrate the ways American women have historically changed & continue to shape our society. As we also recognize #RedCrossMonth, we see the result of one woman’s call to action through the humanitarian relief efforts of the @Redcross

MICHELLE OBAMA: Generations of Americans marched and organized for women's rights. This Women's History Month, let's honor them with our service.