Did Melania Trump Say 'Who Gives a F*ck about Christmas Stuff'?

The quote reportedly was featured in a secretly recorded discussion between Melania Trump and Stephanie Winston Wolkoff, a former top aide to the first lady. 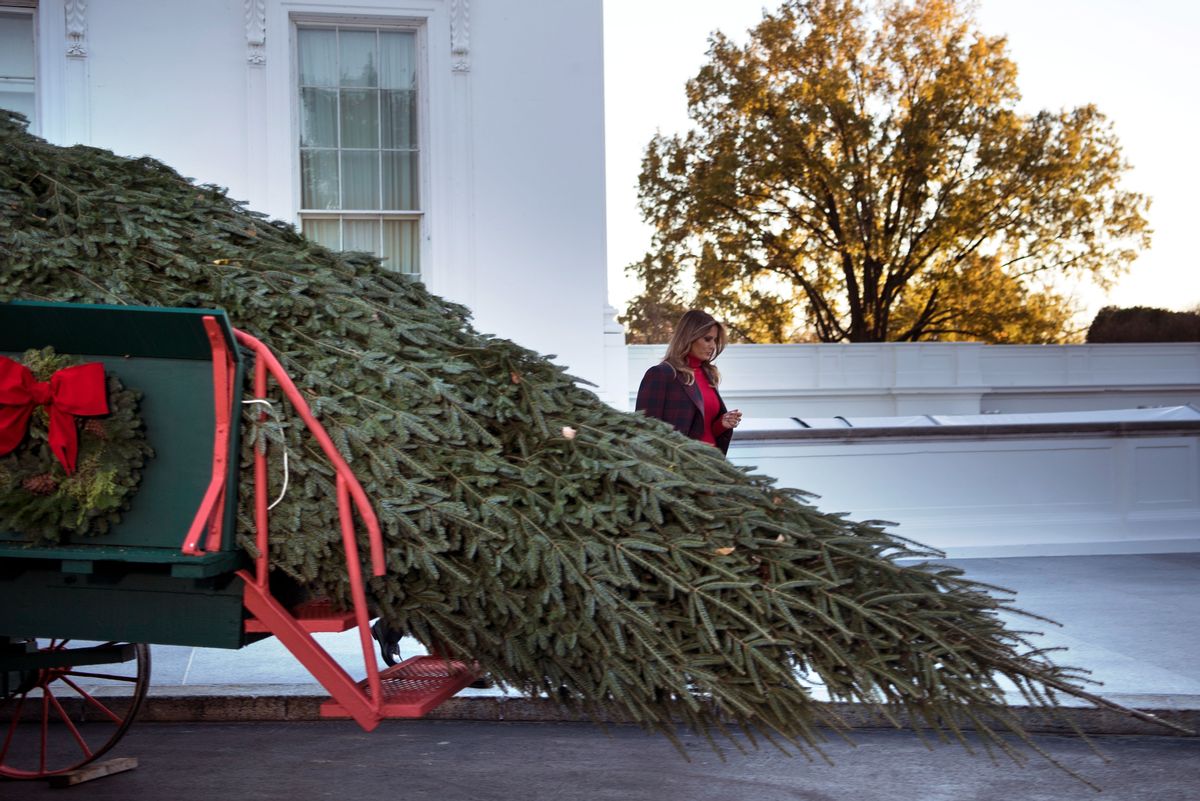 Claim:
In a July 2018 audio recording, first lady Melania Trump can be heard saying: "Who gives a fuck about Christmas stuff and decoration?"
Rating:

In September 2022, the Office of Melania Trump Twitter account tweeted a statement from the former first lady in which she addressed the origin of these remarks. In part, she said, "I will personally set the record straight because the mainstream media has failed to provide context for these misleading exchanges." Her statement is provided in full below.

A secretly taped conversation from July 2018 between Melania Trump and former top aide Stephanie Winston Wolkoff recorded several profanity-laced comments made by the first lady, including: "Who gives a fuck about Christmas stuff and decoration?"

Nearly two years after this story was originally published, the former first lady issued a statement on social media about the audio recordings, claiming that context was missing from the "misleading exchanges":

The audio first aired on Oct. 1, 2020, on the CNN primetime program "Anderson Cooper 360." Cooper referred to Wolkoff as her "former best friend," and The New York Times identified Wolkoff as being a "close confidant." The portion about Christmas runs from 4:35-6:03 in this video:

Melania Trump: They say I'm complicit, I'm the same like him, I support him. I don't say enough. I don't do enough.

Stephanie Winston Wolkoff: Nope. It's, it --

Trump: And OK. And then I do it. And I said I'm working on Christmas planning for the Christmas. And they said, oh, what about the children, that they were separated. Give me a fucking break. Where they were saying anything when Obama did that?

Trump: I cannot go. I was trying to get the kid reunited with the mom, I didn't have a chance, needs to go through the process and through the law.

Wolkoff: But here's my thing, hear what you just said, but instead of that, if -- you just -- your messaging. You were so loved. You were.

It is true that the first lady said the words: "Who gives a fuck about Christmas stuff and decoration?" The quote appeared to be in the context of Mrs. Trump having wished she could concentrate on more important duties, including purportedly wishing to reunite a mother and child that may have been separated at the U.S.-Mexico border. At the time, the Trump administration was under scrutiny for its practice of separating families at that border with no clear plan for reuniting them. (More than two years later in October 2020, hundreds of such children had still not been reunited with their parents.)

Wolkoff's audio recordings featured more of the first lady talking about her June 21, 2018, visit to the U.S.-Mexico border, in which she received quite a bit of press for a jacket she wore that read: "I REALLY DON'T CARE, DO U?" Running from 2:44-4:34 in the same video from "Anderson Cooper 360," Trump mentioned her visit to see the children who came to America:

Trump: All these kids that I met, they were -- they are here in the shelters because they were brought by it from through coyotes. The people who were trafficking. And that's why they put them in jail and the kids that they go in shelters and the way they take care of them. It's, you know, they even said the kids, they say, wow, I will have my own bed, I will sleep on the bed, I will have a cabinet for my clothes. It's so sad to hear it, but they have it. They didn't have that in their own countries.

Trump: They sleep on the floor. They are, you know --

Trump: -- they are taking care nicely there. But, you know, yeah, they are not its parents, it's sad. But you when they come here alone, or with coyotes, or illegally, you know, you need to, you need to do something.

Trump: And a lot of, you know, a lot of like moms and kids, they are teaching how to do it, they go over and they say like, oh, we will be killed by a gang member, we will be the -- you know, we will be it's -- so dangerous. So they allow to stay here. Do you understand what I mean?

Wolkoff: I do. And they're the ones that are the bad ones.

Trump: Yes, and they are not, you know, it's not true, that they would, you know, what, I mean, some of them, they using that lines that, you know, they're not professional, but they are, they are teached by other people what to say, to come over and to, you know, to let them go to stay here. Because, you know, they could easily stay in Mexico, but they don't want to stay in Mexico because Mexico doesn't take care of them the same as America does. Mrs. Trump's reference to the idea that former President Barack Obama had a family separation policy is misleading, however. Family separation was not a federal requirement prior to the Trump administration. The Obama administration built cages that have housed children who have crossed the U.S.-Mexico border. However, photographs of the cages from his time in office depicted unaccompanied minors who crossed the border without parents or guardians, which was different from children being separated from their families by the United States government.

Another claim that surfaced in 2020 about first lady and Christmas is that she purportedly said "2020 marks the final holiday season for the Trump White House." This was false, however, as the website that promoted the misleading quote was not an official government website.

Mrs. Trump's recorded conversation added a new chapter to what has been long referred to as "The War on Christmas," which has quite a long history.

On Sept. 21, 2022, this story was updated with new content after the former first lady issued a new statement about the audio recordings.