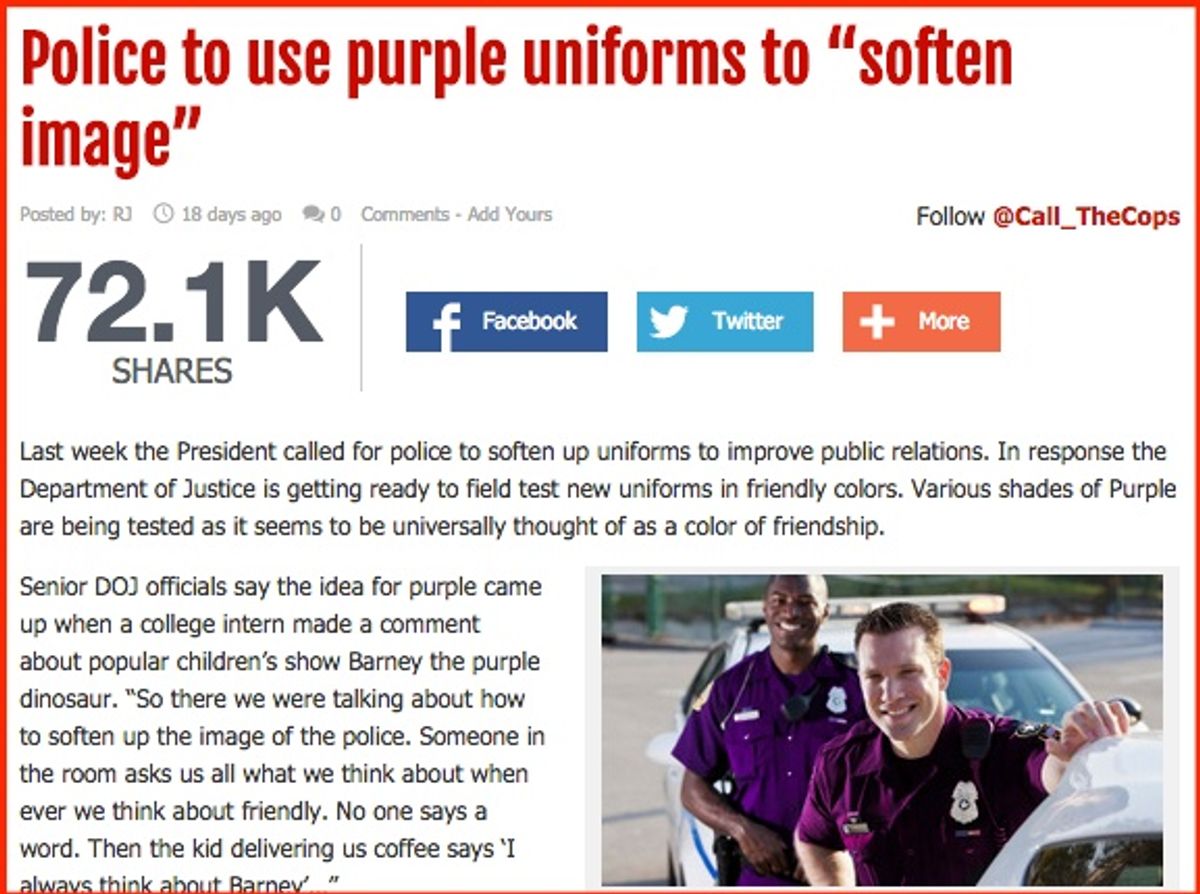 Claim:    Police departments are switching from traditional dark blue uniforms to purple ones in order to "soften" the public image of cops.


Rumor that the DOJ is asking local police to switch to purple police uniforms to soften the image of police — sounds crazy (really, the DOJ has better things to do, and I can't imagine them dictating at this level). My brother, who is in law enforcement, told me about this. Can't find much about it but here is an example.

Origins:    On 23 May 2015, the web site Call the Cops published an article titled "Police to use purple uniforms to 'soften image.'" The article reported that the Department of Justice (under the direction of President Obama) intended to "field test" friendlier colors for police uniforms in order to improve relations between law enforcement and civilians:


Last week the President called for police to soften up uniforms to improve public relations. In response the Department of Justice is getting ready to field test new uniforms in friendly colors. Various shades of Purple are being tested as it seems to be universally thought of as a color of friendship.

Senior DOJ officials say the idea for purple came up when a college intern made a comment about popular children’s show Barney the purple dinosaur. “So there we were talking about how to soften up the image of the police. Someone in the room asks us all what we think about when ever we think about friendly. No one says a word. Then the kid delivering us coffee says ‘I always think about Barney’ ...”

This claim was not the first law enforcement-related rumor started by Call the Cops: In December 2014, a warning about gang members painting the barrels of their guns orange to fool police was traced back to the site.

Like a number of other web sites of its stripe, Call the Cops is a fake news outlet (albeit one devoted to satirizing a specific topic, law enforcement news). Its disclaimer page explains that nothing on the site is meant to be considered factual or credible:


This site is a satire of the current state of Law Enforcement, Fire Fighting and Emergency Medical work.  Stories posted here are not real and you should not assume them to have any basis in any real fact. Heck we tend to leave in spelling and grammer errors just to prove we is not the professional media. No reference of an individual, company, or government entity seeks to inflict malice or emotional harm.

Any statement made by authors on this page should not be considered the opinions of agencies they are employed by.

Moreover, the site's header bills Call the Cops as "America's 27th Most Trusted Source for Public Safety News." For a broader look at how to quickly separate satire from real news, check out our five tips for spotting fake news.