Did an Ex-FBI Agent Write This Open Letter to Eric Holder?

"Until today, I chose to hold my tongue." 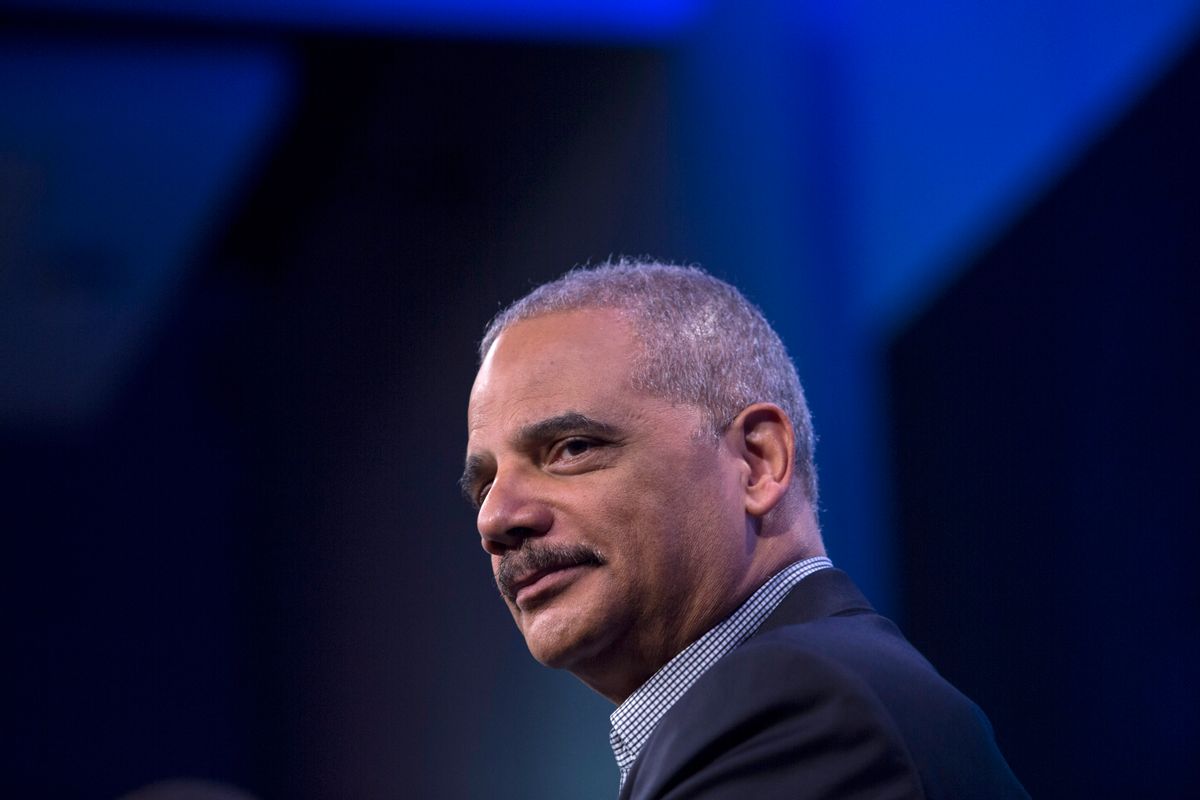 In January 2015, an open letter dated 2014 and addressed to Attorney General Eric Holder was reproduced on a number of web sites, attributed to a former FBI special agent named McCown. The letter in question (usually described as "epic") was typically presented with no context or sourcing information indicating how it made its way to the Internet.

The letter, reproduced below in its entirety, focuses on a number of recent controversies:

It is unlikely that we met while I served in the FBI. That being said, we served at the Department of Justice (DOJ) during the same years and on the same "team" conceptually speaking. During my service in the FBI I worked with a number of U.S. Attorney Offices in the United States to include a tour at FBIHQ where I worked with the Department of Justice (Main) on a daily basis.

I begin my letter with this comment to highlight that I am not a bystander on the topic of law enforcement in the United States. I worked and managed a variety of federal investigations during my of service in the FBI, to include the management of several Civil Rights cases in the State of Texas. In fact, during my last tour in the Bureau, I was an FBI Supervisor responsible for managing federal investigations in nine (9) Texas counties, many of which were rural; in places where one would suspect racism to flourish given the narrative often pushed by Hollywood and urban progressive elites like yourself. I performed this mission diligently and under the close supervision of two FBI managers; an Assistant Special Agent in Charge (ASAC) and Special Agent in Charge (SAC,) both of which happened to be African American and outstanding law enforcement professionals. I also performed this mission serving side by side with a variety of law enforcement agencies at the Federal, State and local level.

I have observed you closely during your tenure as Attorney General and notably during these last tumultuous years; watching you negotiate a number of controversial public matters to include the ATF Fast and Furious scandal, Black Panther Party intimidation at voting booths, IRS targeting of American citizens (citizen groups opposed to the Obama Administration,) the ignoring of US Immigration laws, DOJ criminal indictments of select news reporters and your management of several high profile criminal investigations involving subjects of race, notably African Americans.

Until today, I chose to hold my tongue. However, with the assassination of two NYPD Lieutenants last weekend in City, at the hands of a African American man with a lengthy criminal record, fresh from his participation in anti-police activities; coupled with numerous "don't shoot, hands up," and "black lives matter" protests (some of which are violent) occurring daily around the nation, I am compelled to write you this letter.

To be blunt Mr. Holder, I am appalled at your lack of leadership as the Attorney General of the United States and your blatant politicizing of the Department of Justice. Your actions, both publicly and privately, have done nothing to quell the complex racial issues we face in our country and have done everything to inflame them. As the "top cop" of the United States, you share in the blame for much of the violence and protests we are now witnessing against law enforcement officers honorably serving throughout our nation.

During one of your first public speeches as Attorney General you made it a point to call America "a nation of cowards" concerning race relations. That speech, followed by other public announcements where you emphatically opined that the odds were stacked against African Americans in regard to the enforcement of law, your intention to change the law and permit convicted felons to vote after incarceration, and your changes to federal law ending "racial profiling," are poignant examples of how detached you remain from the challenges faced by law enforcement officers serving in crime ridden neighborhoods throughout the nation. These opinions are also indicative of a man that lives and works in the elitist "bubble" of Washington D.C.

Your performance, as the nation's Attorney General, during the Trayvon Martin case in Sanford, Florida and the Michael Brown case in Ferguson, Missouri clearly highlights your myopic view on this topic. Contrary to your embarrassing prejudgment in the Brown case and evasive post trial remarks on the Martin case, neither Brown nor Martin were targeted and/or killed because of their African American race. Rather, as investigations determined, both teens died as a consequence of their own tragic and egregious behavior; behavior that involved a violent assault on a law abiding citizen in the Trayvon Martin case, and a violent assault on a young police officer in the Michael Brown case. Yet you, as the number one spokesman for law enforcement in the country, blame the deaths of these men on years of institutional racism and the alleged epidemic targeting of African American men by police departments around the country; nothing could be further from the truth. Following the Michael Brown case Grand Jury decision all you could muster was the following comment:

"The Department of Justice is currently investigating not only the shooting but also the Ferguson police department in what is called a "patterns and practices" inquiry to determine if the police department has engaged in systematic racism."

So, let's get this straight. At a decisive moment in history when our nation required a strong and unbiased voice from its' senior law enforcement official, you made it your personal mission to join with other racial antagonist and politicize a tragic event, accusing a young white police officer of a racially motivated killing in what we now know was a justified self-defense shooting of a predatory felon.

Your behavior is unbelievable. You sir, have sacrificed your integrity on the altar of political expediency. You, are the "coward" and hypocrite you so loudly denounce when speaking of broken race relations in America.

Further to this point Mr. Holder, law enforcement officers around the country remain dismayed and shocked at the counsel you keep; that being your close relationship with none other than Al Sharpton, a racist "shake down artist" who spreads hate, divisiveness and the promotion of enforcement sentiment throughout the country; a tax evading fraudster who has unbelievably visited the White House over in recent years. It is simply beyond my comprehension as a former federal law enforcement professional, that you, the Attorney General of the United States, joined arms in common cause with a charlatan like "the Reverend" Al Sharpton; and it speaks volumes to your personal character and lack of professional judgment.

Violent crime, out of wedlock births, drug abuse, rampant unemployment and poverty found in many low-income minority neighborhoods are not a result of racist community policing and racial profiling as you so quickly assert, and frankly most law abiding Americans are exhausted of hearing this false narrative repeated time and again by you and others in the racial grievance industry. While no one, me included, would ever suggest that African Americans have not suffered from institutional racism in the past, I would strongly argue that we no longer live in the Mississippi of 1965, nor do we live in a country that even closely resembles the "Jim Crow" South of yesteryear. Those days, thankfully, are in the past as are the generations of Americans that supported such egregious behavior and endured such suffering.

Rather, Mr. Holder, we live in a day and time where the root cause of many problems faced in our African American communities can be attributed to the breakdown of civil order due to the rejection of institutional and family authority and the practice of counter-culture values; and most notably, from the absence of strong male leadership in fatherless black families. The reason that our local police officers are so often entwined in tragic events in black communities is because it is the police that have filled the void in these communities that should be occupied by moral and strong black men leading family units with Godly values. You, especially, should be thanking the police rather than persecuting them for the gap they fill in these communities because if it were not for the intervention of local police many African American neighborhoods would be in a state of total anarchy.

Yet tragically, you and your race-baiting colleague Al Sharpton (a paid media personality under contract with MSNBC news) choose to remain silent because to publicly speak this self-evident truth threatens to not only alienate and offend the most loyal voting constituency of the Democratic Party but diminish your and Al Sharpton's self-serving power base in these suffering communities. God forbid that you would suggest individual citizens accept responsibility for their own behavior and the collective failure of their communities; it is so much easier for you and others like you to make excuses, play the victim card, and pander rather than address the real root causes that plague many low income neighborhoods.

Mr. Holder, the public is aware of FBI statistics that tell a different story than the one you and Sharpton preach. We know that young African American males, representing a tiny fraction of the U.S. population, are by far the greatest perpetrators of violent crime in America when compared to their peers in other ethnic groups, and, we know that citizens of African American descent overwhelmingly make up the majority of their victims. We also know that incidents where white police officers shoot and kill black perpetrators are rare and on the decline. We know further that although there are legitimate and bona fide Federal Civil Rights investigations in the United States worthy of pursuing, they are miniscule when compared to the false narrative portrayed by you, President Obama and Sharpton declaring rampant discrimination against African American men by police officers throughout the country. You are just plain wrong.

In closing Mr. Holder I will leave you with this thought; you were given a rare opportunity to lead with integrity during a variety of divisive and controversial issues during your tenure as the General of the United States and rather than be a man of moral courage you chose instead to cower, further inflame racial tensions, advance false narratives and play progressive political activist.

Time and again you chose to "politicize" the mission of the Department of Justice rather than pursue justice and now, tragically, we are witnessing the fruits of your irresponsible behavior in the murder of two innocent police officers in City, assassinated by a man motivated by the flames of racial hatred that you personally fanned. How many more police officers will be injured or die in the coming days because of the perilous conditions you helped create in this nation. You, President Obama and Al Sharpton own this problem lock, stock and barrel and now it is your legacy.

As thousands of NYPD officers turn their collective back on Mayor Bill another dishonest politician and Sharpton disciple, so too do countless Federal law enforcement officers turn our backs on you.

Since its initial appearance, the letter attributed to McCown has circulated widely on social media sites and blogs. Dee McCown did serve as an FBI special agent between 1997 and 2008, and when we contacted him to verify his authorship, he responded: "I in fact wrote the letter and stand by every word. It's time to stand up and speak truth to power. Thanks for checking."