FALSE: Tim McGraw disclosed his support for Barack Obama's presidency in a 2015 interview.

TRUE: Tim McGraw discussed his support for Barack Obama's presidential campaign back in 2008.

We have always thought you were a great couple and loved your music BUT SINCE YOU HAVE COME OUT FOR OBAMA, WE CAN NO LONGER SUPPORT YOU OR YOUR MUSIC!!!!!!! 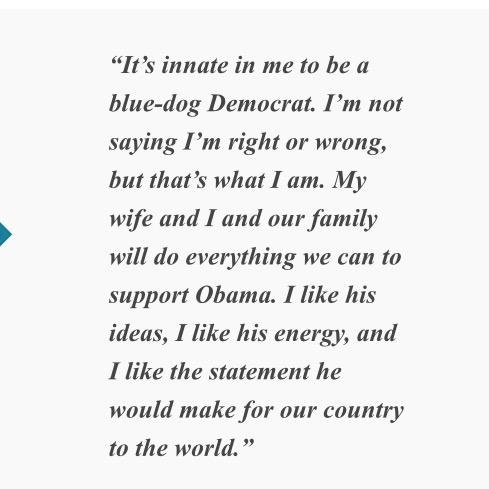 Origins:   In February 2015, several conservative blogs published articles about country singer Tim McGraw's political views, primarily his alleged openly expressed support of the presidency of Barack Obama. The flurry of reports angered a number of country fans, and one of the first posts to recirculate McGraw's remarks described the musician (and his musician wife Faith Hill) as somewhat deceitful:

Tim McGraw is known as a good ole country boy with a successful music career and a beautiful wife, Faith Hill. However, this country boy has revealed that he may not be as conventionally "country" as he may seem.

A few years ago, McGraw admitted that he is not only an Obama-supporter, but also a hardcore Democrat.

"It's innate in me to be a blue-dog Democrat. I'm not saying I'm right or wrong, but that's what I am," he told People. "My wife and I and our family will do everything we can to support Obama. I like his ideas, I like his energy, and I like the statement he would make for our country to the world."

Subsequent iterations of the claim described McGraw as "hardcore" and an "Obama-supporter", prompting a flood of outrage on the singer's Facebook page. The remarks attributed to McGraw that circulated in were largely an accurate reproduction of something he once said:

It's innate in me to be a blue-dog Democrat. I'm not saying I'm right or wrong, but that's what I am. My wife and I and our family will do everything we can to support Obama. I like his ideas, I like his energy, and I like the statement he would make for our country to the world."

However, those remarks were typically incorrectly presented as being recent statements rather than quotes from several years earlier:

Tim McGraw reveals his support for Obama. He's dead to me now! https://t.co/GbXQC31EM3

While McGraw did express his support for Barack Obama during a 2008 interview with People magazine, an important piece of context was missing from the 2015 recirculation of those quotes: McGraw's remarks were made during Barack Obama's candidacy in 2008, not several years later after President Obama was well into his second term. When McGraw spoke those words, President Bush was still in the White House, and Barack Obama had not yet been voted into office. The remarks were many years old when they were recirculated in 2015 and did not constitute a recent revelation by McGraw of his current political views, nor could the words be reasonably considered an accurate gauge of McGraw's opinions about President Obama's performance in office, as they were spoken prior to the 2008 election.