I'm Here for the McGangbang 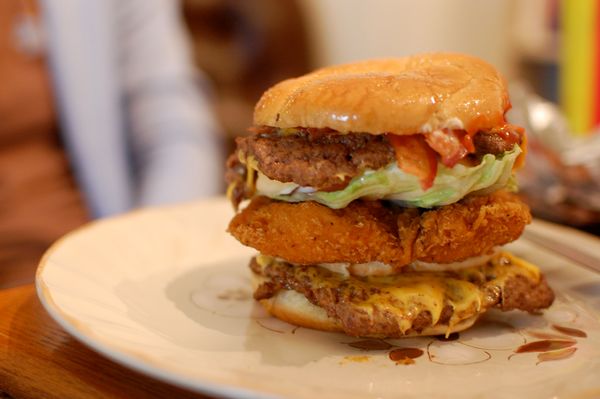 FACT CHECK: Did McDonald's confirm the existence of a "secret menu," including the long-rumored "McGangbang" sandwich?

Claim:  McDonald's has confirmed the existence of a secret menu, including the popular "McGangbang" sandwich.

WHAT'S TRUE:   A McDonald's manager purportedly acknowledged the existence of off-menu secret items during a Reddit AMA (Ask Me Anything) session. WHAT'S FALSE:   Off-menu McDonald's items (such as the fabled McGangbang) are available at all McDonald's locations as part of an officially recognized "secret menu."

It’s not an urban legend.

McDonald’s has a secret menu, according to a manager in Scotland.

I've heard about this new "off menu" item from McDonalds.

According to what I've found its become so prevalent that you can actually order it from some restaurants.

I'm just curious if this is true or not mostly given the offensive title of this "off-menu" item.

Origins:   For many years, whispers of McDonald's "secret menu" have circulated online, but July 2015 Reddit AMA (Ask Me Anything) thread titled "I am A McDonald's manager AMA!" revived the rumors.

In the Reddit AMA, a now-deleted user claiming to be a manager at a McDonald's location answered a range of questions posed by Redditors. Among the queries was one about the fabled McDonald's secret menu, and whether those in the know could go in and tap their noses to obtain various off-menu creations:

Can you confirm the validity of the "Secret Menu"? Also, what is the one item you would recommend customers do not order?

A purported McDonald's manager's response was widely interpreted as proof positive of the secret menu's existence:

You can order from the 'Secret Menu'. Just like with any of our sandwiches, you can add, remove or change ingredients by special request. These are called 'grill orders' (i.e. Big Mac no pickle)

The items on the 'secret menu' weren't invented by anyone officially at McDonald's, it's just a random persons guide to burgers you could potentially 'hack' at McDonald's.

Order one and the workers might not know it by name (i.e. Land, Air and Sea burger or the McGangBang) but if you explain what it is, and are willing to pay for all the ingredients, it's just another 'grill order' that we can make up.

DON'T order... the grilled chicken. It's horrible frozen chicken that we defrost and steam and it's a bit gelatinous.

Blogs such as Eater and Complex summarily declared a single, anonymous Reddit comment (from Scotland) as conclusive evidence that doubts about the secret menu had finally been put to rest — even though that comment itself noted that "workers might not know [secret menu items] by name."

In fact, mentions of the McGangbang (and additional McDonald's secret menu creations) have long circulated online, and a 2006 Urban Dictionary entry defines the McGangbang thusly:

Another Urban Dictionary entry describes the Mc10:35, a fortuitous sandwich available only to a chronological fraction of McDonald's customers (those who hit a restaurant on the cusp of its switching from breakfast to lunch menus) each day:

A hybrid sandwich served at specified McDonalds in the U.S. This sandwich is the combination of a McDouble from the lunch menu with an Egg-McMuffin left over from the breakfast menu.

Both these early iterations of "secret menu" items did not hinge upon the compliance of McDonald's staff to make them, but rather directed the customer to place an order for two separate menu items with no indication that McDonald's would assemble them in an unusual fashion.

By March 2009, a blogger compiled a loose history of the McGangbang (including its progress from web rumor to occasional real life). Through that and other contemporaneous mentions, the menu item was a rumor with which some (but not nearly all) in-the-know employees might play along:

The McGangBang ranks up there in the holy pantheon of WTF. It's a sandwich made from a double cheeseburger and a McChicken sandwich — where you put an entire McChicken sandwich inside a double cheeseburger. It's a creative manipulation of existing menu items, and an exercise in frugality: taking two items off of the Dollar Menu and creating an entirely new sandwich for a total of $2.16. Truly, it's a sandwich that's more than the sum of its parts.

In addition, it's sort of a subversive act for people to order it by name, as well as a thrill to confound the McDonald's employee with an order for a McGangBang — so much so that people are documenting their experiences at drive-thrus and counters on YouTube (see the many, many videos after the jump).

IMPORTANT: You can’t actually order the McGangBang from McDonalds because it’s NOT on their menu. You need to order a double cheeseburger and a chicken burger separately and then combine the two yourself. If you are really hungry you could order a double Quarter Pounder and shove a McChicken inside it but I haven’t tried that.

More recent iterations still instruct customers to order separate menu items for reassembly and rarely suggest that McDonald's employees are aware of and compliant with putting together such modifications:

Order an Egg McMuffin & a McDouble. Now put the Burger Patties into the McMuffin. Now you've got yourself the elusive Mc10:35.

In a now-deleted page on the McDonald's web site, the brand firmly denied the existence of a secret menu:

Is there a secret menu?

We have no secret menu — or do we?

Actually, our customers are pretty clever when it comes to customizing their orders with our menu items, so you may have seen some of their creations online. But we have no official secret menu of our own.

Basically, the Internet has popularized a number of ad hoc customizations to fast food items. These modifications are often known as "secret menus," but few such items are officially recognized by the chains with which they are associated.